Today was my travel day from the tranquil island of Bali, Indonesia to the city state of Singapore.

The day started by waking up to a beautiful sunrise, going for one last dip in the pool in our villa, and eating pancakes served by our wonderful, generous cook Wayan Woman.

Before leaving the villa, I took many pictures of the place so that I could remember it. If you would like to see more photos of the villa, email me at hwga380@comcast.net saying that you want to subscribe to my photo stream of the villa.

Here are two photos from the photo stream of our four staff people at the villa:

Our maid on the left who I never knew her name, and our cook and helper maid, Wayan Woman on the right. "Wayan" means first-born in Balinese: 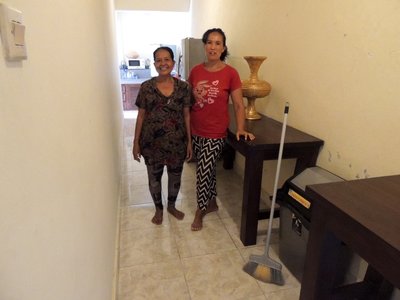 Our driver on the left, Made (pronounced Mar-day), and Wayan Man, our overseer and night watchman on the right. "Made" means second-born in Balinese. 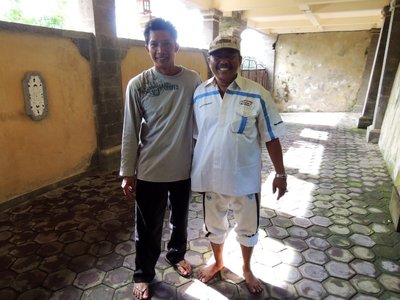 All four of our staff were extremely friendly and generous with their time for us. We observed that overall Indonesia has been the friendliest country we have ever visited, with everyone's behavior and speech being gentle, polite, and friendly. We didn't meet a single unkind soul in the entire country.

Of course, at nine in the morning, we had to leave with our driver Made for the airport. The drive was expedient and took just over an hour. Here are a couple neat Indonesian-style statues along the drive: 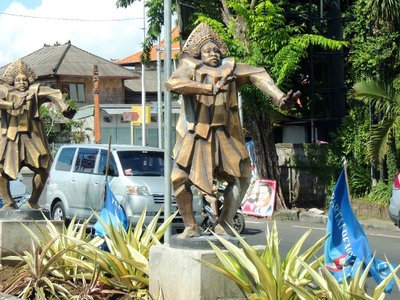 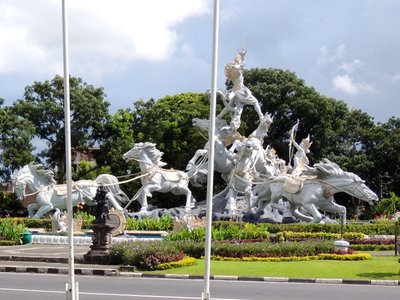 At the airport, we reluctantly said our goodbyes to Made, our generous companion throughout the week. The Denpasar, Bali airport experience was very fast and luxurious because we upgraded to the airport lounge option and were guided through all of the fast lanes with a friendly airport guide. We spent a lot of time in the fancy lounge because we arrived to the terminal super early. It was really nice with free wifi, free pop, free food, and optimum plane spotting.

The flight itself was an uneventful two-and-a-half-hour flight on Air Asia. Here is the view of the South Pacific from the plane: 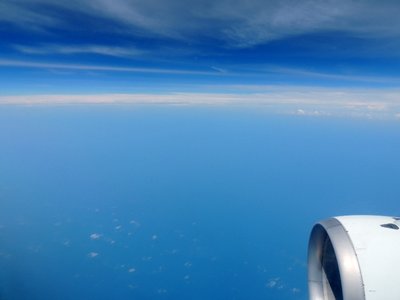 The lines in the Singapore airport were tiresome as expected because Singapore is the "strictest country in the world." They announced that there was a mandatory death penalty for anyone who carried certain forbidden items through the airport!

As we drove to our hotel with our, let's say, verbose taxi driver (who talked loudly in slurred English-Chinese the entire thirty-minute ride), we observed that the city is extremely hazy and smoggy. The air quality is extremely poor which makes for trouble breathing.

The rest of the day was spent checking in to our very cramped hotel room, touring around the nearby Chinatown, and observing a beautiful Hindu temple.

It is just another big city, and definitely nothing significant compared to the island of Bali.

There were no good birds today except for one interesting LARGE-BILLED CROW I saw on the car ride to the airport in Bali, so that will be the bird-of-the-day.

Stay tuned, because tomorrow is our only full day in the city-state of Singapore and our last full day on this entire trip! Of course, I have mixed emotions ranging from sorrow to excitement.

Posted by skwclar 06:31 Archived in Singapore