My Trip in Review

Hello readers, this is the promised post for my final travel day home and also my review of the trip.

My huge travel day started off by a very early start from our hotel in Singapore. Calling a taxi service and waiting for our cab to the airport for quite a long time set up the theme of the day...waiting. Thankfully, the taxi driver was very friendly and we had a pleasant an inexpensive ride to the Singapore Changi International Airport.

Upon arriving at the airport, we had to wait in numerous lines and finally at one security checkpoint, we got to the front of the line just to learn that some crucial paperwork was missing! We were already behind schedule from waiting in the previous lines, but now the prospect of getting to the gate in time was even tighter!

We hurried to the correct office, my parents filled out the crucial forms, and my family and I finally passed through the security checkpoint. After hurrying to the gate and then waiting in yet another long line, we boarded the plane. The flight was operated by Air China and was executed on an Airbus A330-300 wide-body, long-range jet. Our family had seats in Economy Class. The flight was overall very pleasant (except for the absolutely disgusting lunch served on board) and it took approximately six hours to fly from Singapore to our layover in Beijing, China.

Before we even landed in Beijing, my family and I were disgusted at how smoggy the city was. We thought Singapore was bad, but this looked simply unhealthy! Something really should be done about managing the air quality in this part of the world. Thankfully, we didn't have to leave the airport while in Beijing so we didn't experience the poor air quality in the surrounding area.

Once we arrived at the Beijing Peking International Airport, we had to wait in not one, not two, but three exasperatingly long lines! At this point, our family was at our wit's end because the timing was getting tight for this connection, also! The one comforting factor was that these lines were all due to tight security requirements which means that the plane rides are safe.

Somehow, I managed to get a life bird while gazing out of the window during a wait in one of the long lines. It was a EURASIAN MAGPIE that flew right by the window! This was a total surprise and I was not expecting to get a life bird from within the airport, especially with the smoggy conditions outside. Lifer #646!

We barely made the flight and were literally one of the last few people aboard the plane. It was a similar jet to the one earlier, this time a Boeing B777-200, but it was operated by United Airlines. Our family had seats in the front row of the Premium Economy Class.

Onboard the plane, I reviewed my world life list, watched the new movie "Gravity" (it was really awesome!), and listened to my little sister Pearl be a pain in the butt to my mom on the opposite side of the plane. Even though my mom was frustrated, we all understood Pearl because she had only gotten about seven hours of sleep the night before, and it was a restless night of sleep for her, also. Traveling this much is tough on any person her age, and she has actually been quite a trooper this entire trip, mainly keeping a positive attitude.

Due to the circular nature of the Earth, the plane took a very interesting route from Beijing to Chicago. First, it flew northeast, crossing northwest of Korea, over the eastern part of Siberia, and finally a bit over the Arctic Ocean. Then, it turned southward over northeast Alaska, the Northwest Territories of Canada, southern Canada, and entered the USA over Minnesota, over Wisconsin, and finally it descended into Chicago. I enjoyed watching the flight statistics on my little personal television screen. One thing that I found particularly interesting was that at one point the outside temperature read a whopping -89 degrees!

Here is a photo I took of the screen showing where we were on the flight when the temperature hit -87 outside: 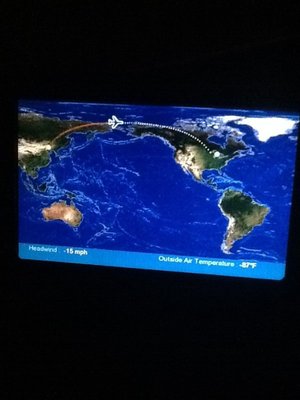 My plan to evade the brunt of the jet-lag was to drink as much caffeinated pop as possible on the plane so I would stay awake, and then crash and fall asleep right when we got home, which would be in the evening and would put me pretty much back on track with regards to my sleeping schedule. Even though I was very groggy for the last few hours of the flight, it worked and I managed seven hours of UNINTERRUPTED sleep last night, which is extremely good for jet-lag!

The entire flight was extremely smooth with absolutely NO bumps at all. It was the smoothest flight I've ever been on! That was nice for me because I am a nervous flier when it comes to turbulence.

We landed at Chicago O'Hare Airport on schedule, maybe even a bit early, and after waiting in MORE along lines, we finally hailed a cab, and we were home by seven in the evening. Our kind neighbors (shout out to the Loughrans and the Maidlows) had put up "welcome home" signs on our house, which made us feel very welcomed indeed as we arrived back home to our decorated house.

A long, hot shower in a non-hotel shower, then falling into my own bed and sleeping like a baby has never felt so good before in my entire life!

Now I will give the overall non-birding and then the birding review of the entire trip as a whole.

NEW ZEALAND
We stayed in New Zealand for the longest time of any country we traveled to on this trip; the first five weeks of our travels were devoted to this country. My family and I were in awe of New Zealand with its beautiful scenery from magnificent, ancient, old-growth forests to lush countrysides to stunning, snow-wrapped mountains and valleys. We all agreed that with regards to scenery, New Zealand won.

AUSTRALIA
Australia was our most unique country with regards to animals. The animals were the highlight of our three-week stay in this country with typical Australian animals seen such as kangaroos, wallabies, koalas, echidnas, cockatoos, and lyrebirds.

INDONESIA
We stayed one week in the beautiful island of Bali, Indonesia. The culture was the highlight of our stay here, and some of our favorite cultural customs about this island were 1) listening to the gamelan being played from our villa during early mornings and evenings. The gamelan is an instrument that is endemic to Bali, and it looks similar to a xylophone but has a more ringing, almost a more melancholy tone. 2) seeing the Hindu dance 3) visiting many beautiful Hindu temples 4) getting to know our four gracious staff people at the villa.

SINGAPORE
My family stayed two nights in Singapore. It was nice, but we were all a but travel weary at that point and were looking forward to getting home.

Now here are the birding stats for the trip:

I think overall I enjoyed birding in New Zealand the most. Bird-of-the-trip to the Little Spotted Kiwi (which was found in New Zealand). It was an amazing experience seeing such an extremely rare and unique creature so close and even photographing it! Runner-up to the Wandering Albatross, which were also found in New Zealand, because they have the largest wingspan of any living bird!

Now, announcing the travel plans for the rest of the year...

In mid-April, my family and I will leave for a one-month tour of Europe: Turkey, Italy, The Vatican City, France, and England. We will arrive back home in mid-May, just in time for peak songbird migration back home! Then, our next big trip will be sometime in August when I will leave for about two weeks to go to one of the places in the world that is the nearest to my heart: the beautiful Sun Valley, Idaho.

Between trips, however, I will of course be birding closer to home, so stay tuned for random posts here and there about any interesting sightings I have!

Posted by skwclar 05:43 Archived in USA

Thanks for sharing the trip. It's been interesting to read about somebody travelling with a very different focus than I usually do (you on birdlife, I tend to want to see architecture and historical structures). Good work on figuring out how to deal with jetlag on long flights - I use the same method as you (stay or sleep as required so you are on the correct time when you land), but I was much older when I figured that out.

Safe and interesting travels in the future!