Today I decided to bike to a nearby preserve called Thatcher Woods to look for Rusty Blackbirds. This is the first birding outing I have taken since I have arrived home from my big trip.

On the bike ride there I saw a small, unidentified raptor, and I heard my FOY (first-of-the-year) BROWN CREEPER give its high-pitched call. While I was scoping a flock of grackles soon after I arrived at the preserve, I met Jill Anderson by coincidence and we decided to bird together to see if we could find anything good.

The next half an hour was spent scanning through a flock of about twenty COMMON GRACKLES, but no Rusties were seen. At one point, a RED-TAILED HAWK flew over. The best place to look for Rusty Blackbirds in the preserve is in the flooded woodland just west of the overflow parking lot north of Chicago Avenue.

Next, Ms. Anderson graciously offered to drive me around the preserve to see the best spots for birding. A stop at GAR Woods south of the railroad tracks was a nice change of terrain but pretty much devoid of birds, except for this male DOWNY WOODPECKER: 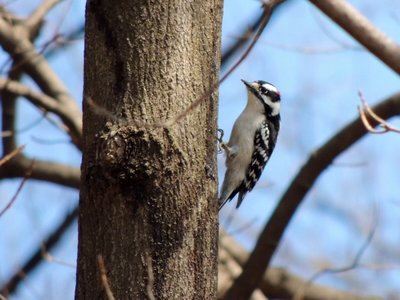 Finally, we went back to Thatcher Woods north of Chicago Avenue and birded in the marshy soccer field and the surrounding woodland. I saw my FOY KILLDEER in the soccer field: 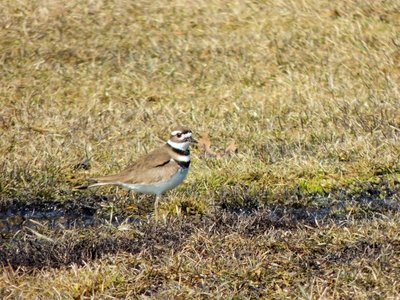 Heading into the woods, Ms. Anderson showed me a place where an old dance hall used to stand, as well as an overgrown road that used to have houses lining it, all right in the middle of the preserve! Seeing three White-tailed Deer was a nice treat, also. 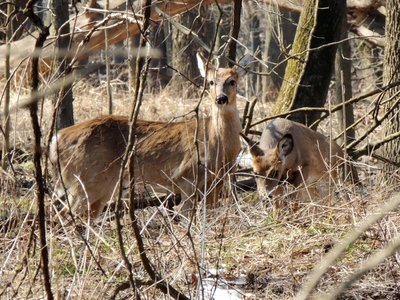 Just before we emerged back onto the field, we found our bird highlight of the day--seven absolutely gorgeous FOY EASTERN BLUEBIRDS! 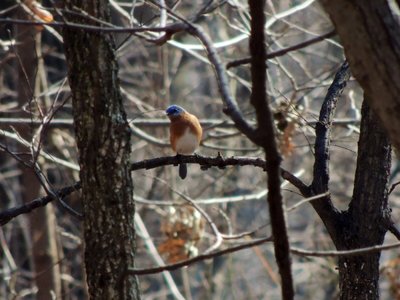 While in the field, three more RED-TAILED HAWKS flew over as well as another unidentified "buteo" species of hawk. Here is a bad documentation photo of one of the Red-tailed Hawks in flight: 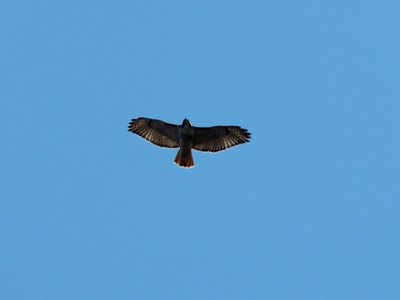 After that, Ms. Anderson dropped me off at my bike and we parted our ways. It was wonderful having a relatively productive bird outing as well as meeting a new birder, which is always a great bonus.

Thank you to Ms. Anderson for driving me around, which was extremely generous of her.

Bird-of-the-day to the seven EASTERN BLUEBIRDS.

Posted by skwclar 14:52 Archived in USA