Today I tried Thatcher Woods and Miller Meadow again with Jill Anderson in search of Rusty Blackbirds, Wilson's Snipes, and American Woodcocks. We didn't see any of our target birds, and we agreed that our "consolation birds" didn't even make up for the lack of targets. Since it is a late spring this year, Jill and I came to the conclusion that they just simply haven't arrived in noticeable numbers this far north yet.

I arrived on my bike at Thatcher's marshy soccer field at seven in the morning and tramped about the field in attempts to flush a snipe or a woodcock, however, to my dismay, not even a Killdeer was seen! Maybe it was because a juvenile male COOPER'S HAWK was patrolling the area... 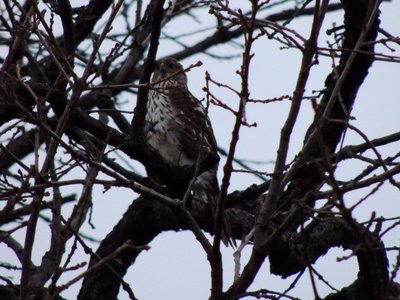 Anyway, Jill picked me up in her car at eight for a brief stop at her house so I could borrow one of her pairs of socks. My feet were extremely cold and wet at that point because I was only wearing gym shoes, silly me.

Thank you to Jill for lending me one of her pairs of socks, and soon we were on the road again to Miller Meadow.

The first interesting bird seen at the Meadow was a quick flyover FOY NORTHERN HARRIER (photo only for documentation purposes; note the white rump on this bird): 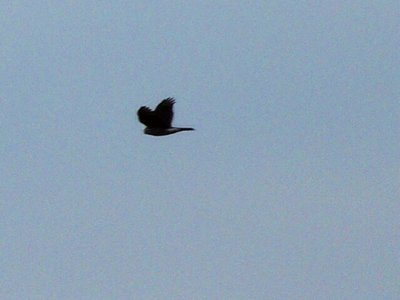 Throughout our one-hour-fifteen-minute search for good birds in the Meadow and surrounding areas, the most common birds were AMERICAN TREE SPARROWS, male RED-WINGED BLACKBIRDS, and CANADA GEESE. Below is a photo of one of the many male Red-winged Blackbirds seen at the Meadow; no females have arrived this far north yet because they migrate later in the spring after the males set up their territories. 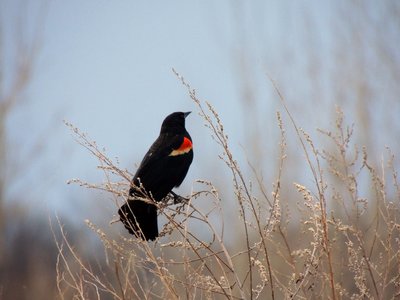 We saw a few AMERICAN KESTRELS and EASTERN MEADOWLARKS as well, but in lesser numbers. At one point, a brief stop at a pond in the woods next to the meadow yielded fly-over CANADA GEESE, 30 MALLARDS, 2 WOOD DUCKS, and a big surprise: two RED-BREASTED MERGANSERS. We did not expect to see diving ducks like these mergansers in such a small, shallow pond. Here is a photo of the two Red-breasted Mergansers seen there: 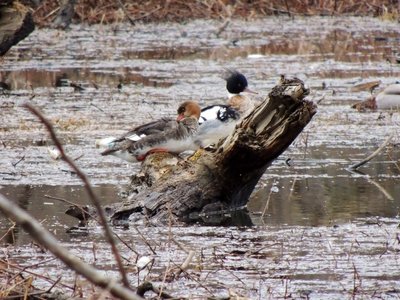 On the way back to the car, two KILLDEER were seen, including one that confused us into thinking it was a rarer shorebird species. Also seen were two AMERICAN KESTRELS perched at the top of a tree. One non-bird highlight was seeing this Coyote multiple times on the walk: 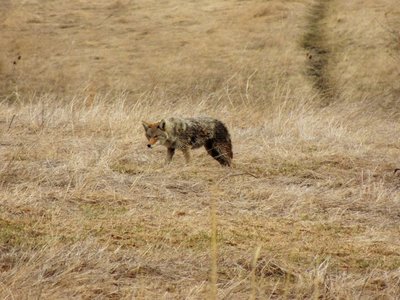 The final bird of the trip was a heard-only BROWN CREEPER when I arrived back at my house.

It was another great day of birding, and thanks again to Jill Anderson for driving me and birding with me in these places for a second day in a row.

Posted by skwclar 08:55 Archived in USA