Before I divulge into the musings of the meanderings for today, I would like to give a couple heads-ups.

For birders, this trip to Europe is SUPER planned out by my parents with regards to sightseeing, so I will definitely be seeing and getting new birds, but it will be much less devoted to birding than the last two trips.

For non-birders, as you might know, I'm not a sappy blog-writer. If I like something, I'll tell you I like it, and if I don't like something, I'll tell you I don't like it. A lot of this sightseeing is very, kind of "in between" for me so that's how I am going to be writing a lot of the reports. If you want something a bit more insightful for the non-avian highlights of my family's travels, you should probably check out my parents' blog also:
http://gryphonglobetrotters.travellerspoint.com

So, my mom, Pearl, and I woke up bright and early in order to get to breakfast before the crowds came (my Dad will join us when we arrive in Italy on Thursday).

The free breakfast buffet was at the roof-top restaurant right above our hotel room. Here is the view from breakfast:
(Hagia Sofia, pronounced Aya-Sofia, on the left, with the Blue Mosque on the right) 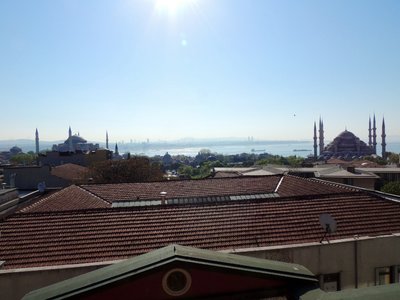 Close-up of the Blue Mosque. Notice it has six minarets (towers), which is unusual for a mosque. 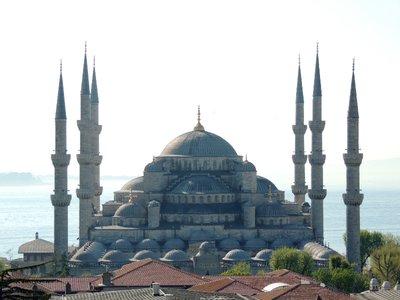 If I showed you every single architecture photo I took today, this blog post would probably fry your electronic device, so if you would like to be invited to the photo stream I have started, called "Europe 2014 Non-Bird Photos," simply email me at:
hwga380@comcast.net

Email me at the same address if you would also like to subscribe to my photo stream called "Henry's Bird Photos."

Anyway, back to today. Our first stop after breakfast was at the ancient Topkapi Palace Grounds, the former seat of the sultans during the Ottoman Empire. The architecture was beautiful but I got a bit bored after a while. Here is one of the photos I took: 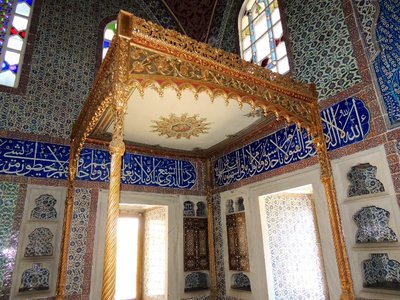 The only reason why I didn't expire in boredom was because there were actually a number of birds on premises, including the ones featured below: 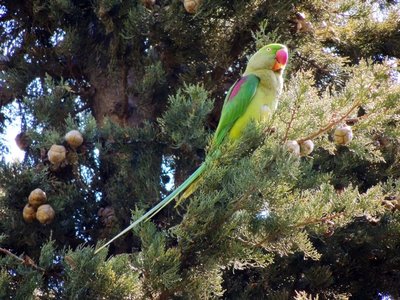 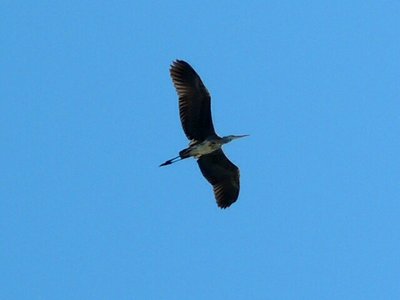 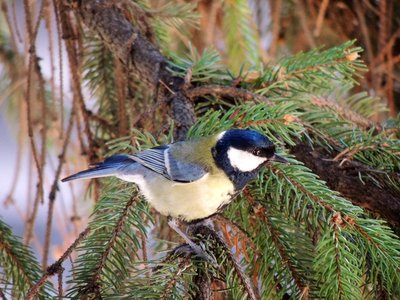 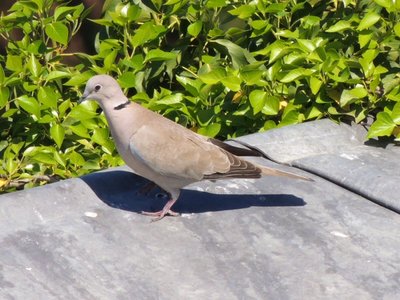 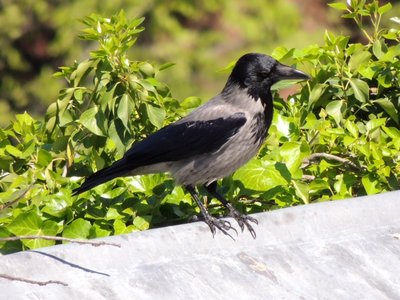 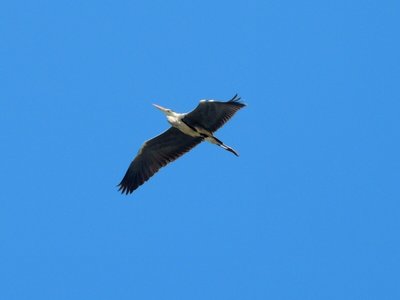 Then, we had lunch alongside the Bosphorus River. Since Istanbul is a major port, I saw these three cruise ships docked there: 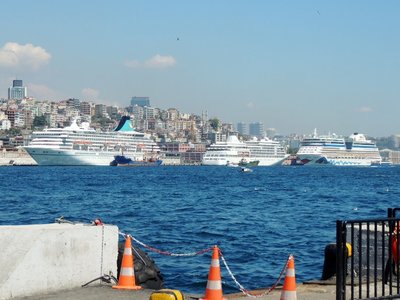 I saw this EUROPEAN SHAG in the river: 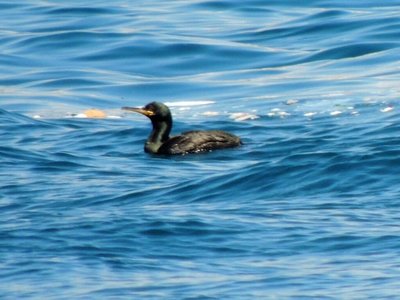 After lunch, my mom, Pearl, and I all headed back to the hotel to rest up for the activities later in the afternoon. Here is a photo of my little sister Pearl sleeping, with her new blindfold from Turkish Airlines :-) 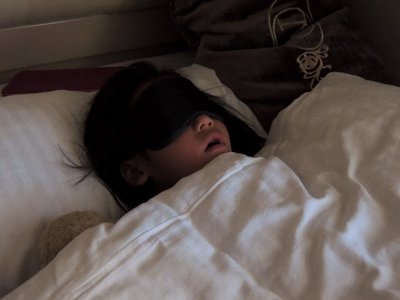 Our first afternoon activity was touring the Blue Mosque. It was wonderful! Again, if you would like to see the many architecture photos I took/will take, email me to subscribe to my photo stream, but here is one of the best ones: 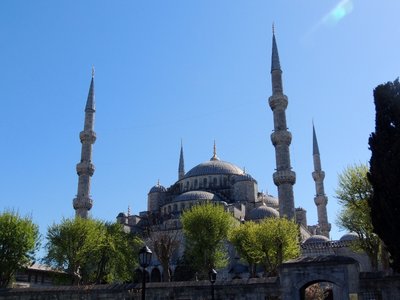 On the way to our next stop, I paused for a moment to photograph the beautiful Hagia Sofia: 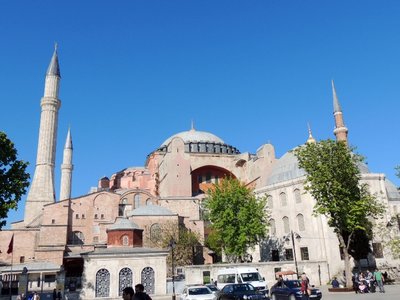 Our next and final sightseeing destination for the day was touring the Basilica Cistern, which was basically a gigantic underground series of passageways dotted with huge pillars so that the ground above wouldn't cave in. The cistern, which had about three inches of water in it complete with fish, has been around for about 1,500 years (it was excavated during the rule of Emperor Justinian the Great during the ancient Byzantine Empire)! The cistern reminded me of the Chamber of Secrets from the second movie of Harry Potter. 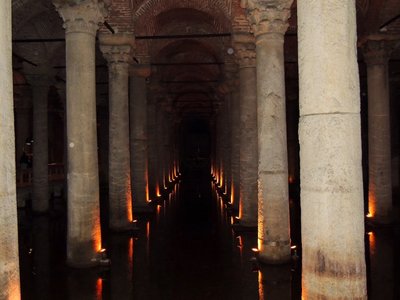 After that, we had dinner at a lovely outdoor restaurant and headed back to the hotel room for a quiet evening. The last two noteworthy birds of the day were an EURASIAN MAGPIE and this lovely LAUGHING DOVE: 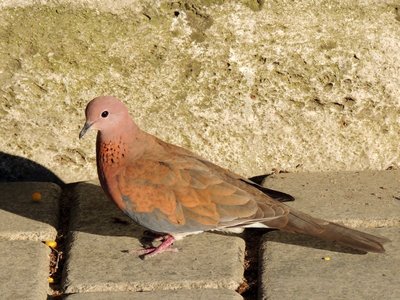 The funny thing about the magpie was that the only other time I have ever seen this species was when I was looking out the window at a brief layover at the Beijing International Airport on the way home from Singapore to Chicago, which also happened to be the only time I have ever been in China. Therefore, I will give the EURASIAN MAGPIE the bird-of-the-day award. Runners-up to the ALEXANDRINE PARAKEET and the GREAT TIT, and while the latter has a slightly disturbing name, they were the most photogenic bird species today.

Henry
World Life List: 700 Species (13 life birds today)
I have finally made it to 700 species, which was my goal for the END of this trip, so it is great I achieved it so quickly. I wonder if 800 species is feasible by the time I arrive home from my trip in May...?

Here are the life birds I have obtained since I arrived here in Turkey yesterday:

Posted by skwclar 10:25 Archived in Turkey