Today I saw two WHOOPING CRANES (life bird #674), and Whooping Cranes are an endangered species, given the fact that their current wild population is under 300 birds, and possibly still declining. There are two breeding populations in the world. One is comprised of a couple hundred birds in Canada and the other is just under ten birds in Wisconsin. Today I saw two Whooping Cranes at Necedah National Wildlife Refuge in western Wisconsin, which means I saw about one fourth of the Wisconsin population and about one hundredth of the total Whooping Crane population, even though it was just merely a fleeting glimpse of two fly-over birds.

Here is an extremely crappy photo, the best I managed, of the second crane disappearing in flight behind a tree: 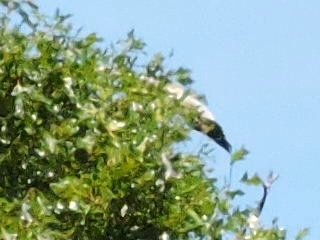 Even though, photographically speaking, it was disappointing, the experience of seeing one of the rarest birds in the world fly overhead is an invigorating and unforgettable experience.

I birded Necedah with my aunt and uncle from about noon to 4:15pm. Other than the cranes which we saw within five minutes of entering the preserve, we looked for and found other goodies, as well, such as the birds I photographed below.

A beautiful male SCARLET TANAGER at the tippy-top of a large tree: 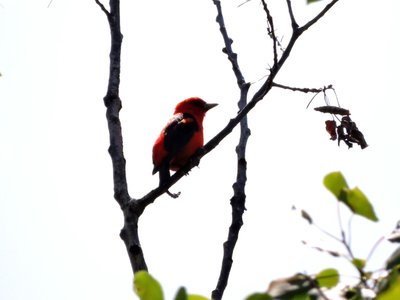 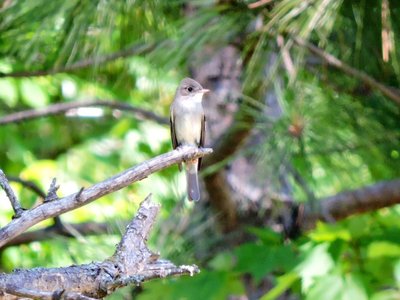 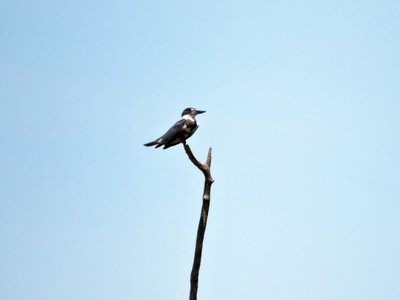 The second best bird species today were the 13 federally threatened RED-HEADED WOODPECKERS (the most I have ever seen at one time) that we saw at the refuge. Here is a photo I took of an especially photogenic one: 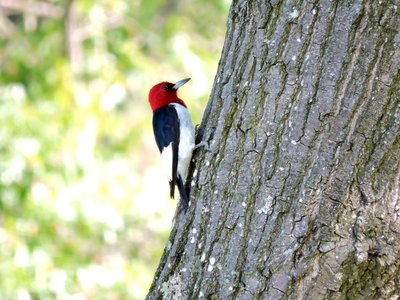 It was a fantastic outing and a great experience to see the mega-rare WHOOPING CRANES, which will have to be the bird of the day.

Tomorrow will be my last full day spent birding with my aunt and uncle in the western Wisconsin area, and then I will drive up with my mom to the pristine Madeline Island, which is part of the Apostle Islands chain, north of mainland Wisconsin in Lake Superior.

The full species list for today is attached below my signature.

Posted by skwclar 15:46 Archived in USA