After a hearty breakfast at my aunt and uncle's house, my uncle and I hopped into his car and started on our quest to find the first rare bird of this journey: a Northern Hawk Owl (a species that usually resides in Canada) that has been hunting for mice at a certain subdivision of Eau Claire, Wisconsin, for over a week. We picked up our birding friend, Bruce, and were soon on our way to Eau Claire.

After an hour and a half of driving from La Crosse to Eau Claire through beautiful Wisconsin countryside, complete with a glistening two-inch coating of snow, we arrived at the subdivision where the owl was being seen. The sky provided absolutely brilliant light for photography, as it was a perfectly clear day today, but the temperatures were downright miserable. Throughout the day, the temperatures hovered between 5 and 10 degrees, with wind chills below zero.

We scanned the subdivision from our car, methodically cruising down every road and searching every tree in sight. After at least an hour of this nonsense, I suddenly exclaimed, "Stop! Look in that tall tree to our right! Is that it?"

A plump avian silhouette, a touch larger than your average Sharp-shinned Hawk, was perched at the top of a bare tree, and all three of us immediately got our binoculars/cameras on it and almost simultaneously confirmed that yes, we had finally found the bird we were after! Life bird #703, Northern Hawk Owl! Hooray!

For at least another hour, we followed this owl around the neighborhood because it hunts during the daytime and therefore moves frequently from perch to perch, scanning for mice to snatch from under the snow cover. We saw it catch multiple mice; it was an expert hunter. The three of us had a five-minute cycle of photograph the bird, warm up in car, drive to a more convenient photography position, photograph the bird, etc. It was challenging to enjoy the majesty of the creature whilst enduring the utterly frigid cold all the while, but we managed with the help of multiple layers of clothing and neat little hand/feet warmers that my uncle provided.

At one point while I was photographing this bird from a distance, it spread its wings and flew directly towards me. Just shy of reaching me, it stretched out its large talons and landed on a plant just a mere five feet in front of me. My jaw dropped and a giddy smile poured out over my face, but I dared not even breath as I snapped the below photos of this amazing bird: 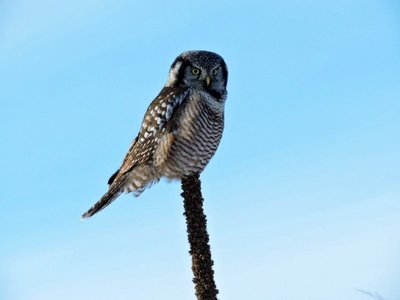 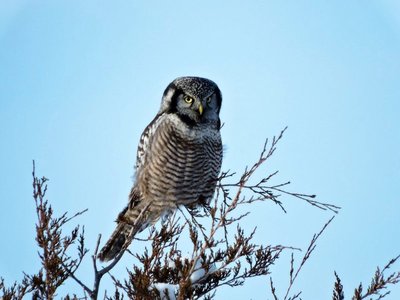 Wow, what an encounter! Bruce, my uncle, and I all celebrated once we reached the car and happily drove away. First target bird of the trip, check.

Then, we were off to...of all places...a cemetery to see if we could find some recently reported rare Bohemian Waxwings. After cruising around the premises in our car, we decided that the cemetery held exactly zero birds. This miss wasn't terribly tough on us because the Northern Hawk Owl is much rarer than Bohemian Waxwings any day, and the waxwings had only been reported by one person, which makes their presence even less likely.

After a quick stop at Subway, a three-and-a-half hour drive, nearly running out of gas, and refueling the car at a gas station, we arrived at our motel in Duluth, Minnesota, where the three of us will spend the night. We had a nice dinner at the Duluth Grill and then promptly returned to our motel in order to get enough rest in preparation for the big day of birding we have planned for tomorrow, speaking of which...

Tomorrow my uncle, Bruce, and I will bird the world-famous Sax-Zim Bog in northern Minnesota in hopes of finding winter specialties ranging from anything from Evening Grosbeaks to my nemesis bird, the Great Gray Owl. This bog has many accolades, including being featured on the successful movie "The Big Year" as well as attracting visitors from everywhere from Florida to Japan. Stay tuned!

Bird-of-the-day goes to, of course, my life bird NORTHERN HAWK OWL, which unbelievably perched five feet away from me! Runner-up to a PILEATED WOODPECKER which we saw flying over when we picked up Bruce at his house. The full avian species list for the day is attached below.

Posted by skwclar 19:12 Archived in USA

Dad says: Reading about a "plump avian" makes me hungry!