Today my aunt, uncle, and I hopped into the car from their house near La Crosse, Wisconsin, at around 9 in the morning for a day of birding.

On the highway, I spotted this beautiful dark-morph ROUGH-LEGGED HAWK which was a lifer for me just two days ago, so we stopped on the shoulder so I could capture this photograph: 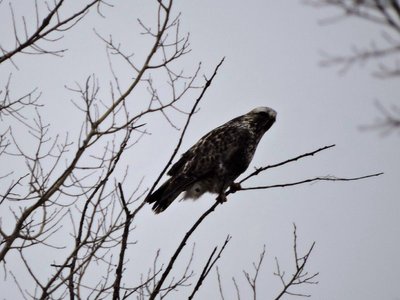 Soon thereafter, I spotted another ROUGH-LEGGED HAWK a short ways down the highway; this time, it was a light-morph individual: 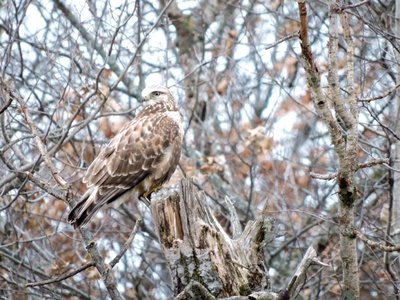 Our first planned stop was at the Peten Well Dam, which had created an area of open water below it. Due to all other bodies of water in the area being iced over in the cold, this area attracts many fish-eating BALD EAGLES in the winter. Here are a few of my photographs of them: 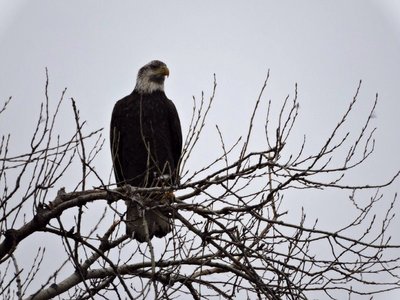 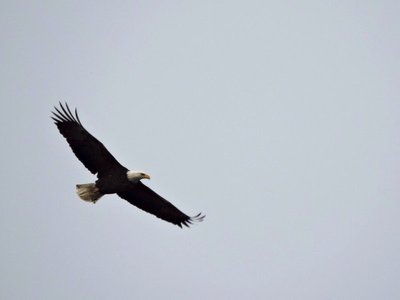 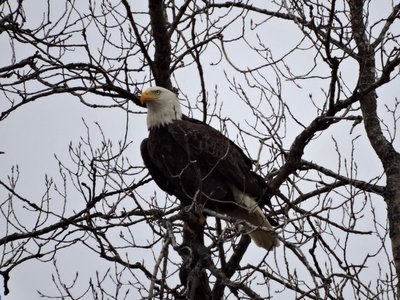 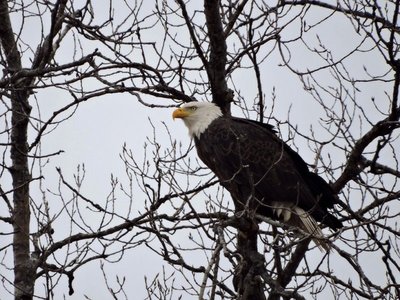 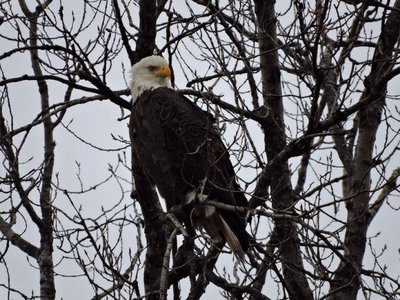 There were also a few diving ducks around, namely COMMOM MERGANSERS and COMMON GOLDENEYE. Here is a shot of two mergansers: 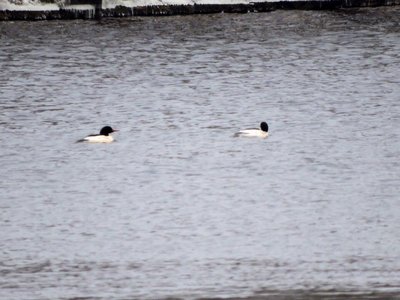 Then, we drove to Subway for lunch. When we came back out to the car, we spotted a large rodent foraging in the parking lot. On closer inspection, it was a muskrat, which rarely venture out of the water except for in winter when it is frozen over: 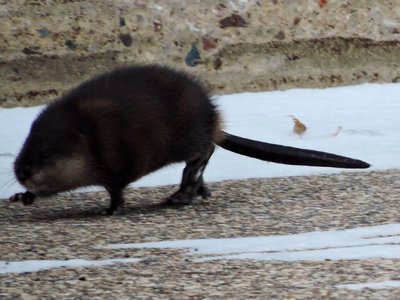 After that, we drove to the Buena Vista Grasslands, our main birding destination for the day. Here is a photo of my aunt and me posing in front of the entrance sign: 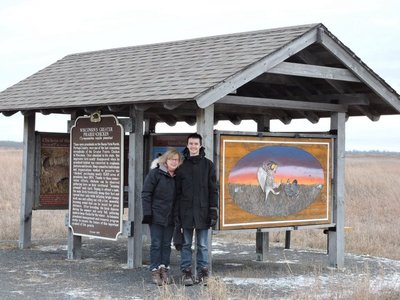 We were there to find two target birds: Greater Prairie-Chickens and Snowy Owls. We started cruising down the many dirt roads that criss-cross this preserve, which is owned partially by public organizations and partially by private farmers and land owners.

Suddenly, I spotted a SNOWY OWL, our first of the day, very, very, far out in a field: 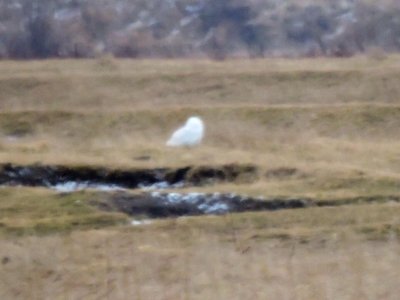 After quite a bit of searching unsuccessfully for elusive prairie-chickens, I spotted a second SNOWY OWL, only a little bit closer to the road than the first one. Note the dark markings on this individual, which make it a female and/or a juvenile bird: 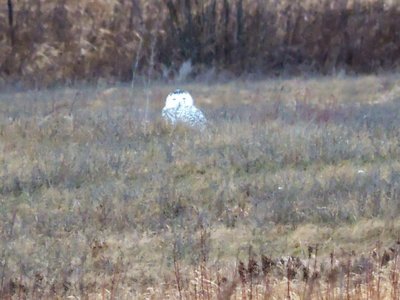 A few minutes later, I spotted this pretty NORTHERN SHRIKE perched on a wire alongside the road: 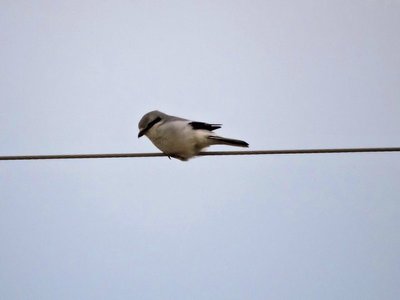 We then went through another period of searching for prairie-chickens and other birds without productive results. At one point, a beautiful male NORTHERN HARRIER flew over, but it passed over too quickly for any photos. We spotted mixed flocks of AMERICAN TREE SPARROWS, COMMON REDPOLLS, and PINE SISKINS, but they also flew away too quickly for photos.

Suddenly, I spotted a THIRD Snowy Owl, and this time it was perched on top of a post right next to the road! 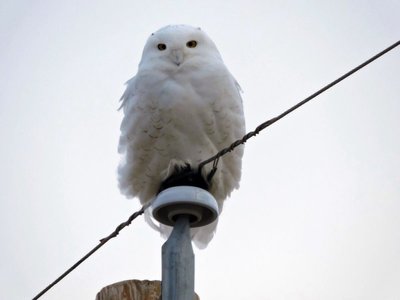 It was the most beautiful Snowy Owl we had ever seen. This bird, as you can see from the photos, possessed very few black markings, making it an adult male specimen. It was a really, really stunning bird. 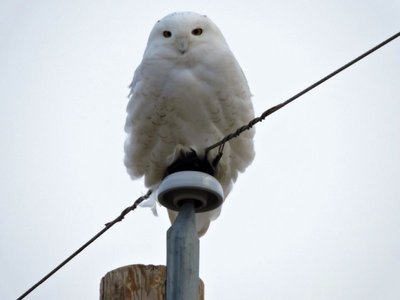 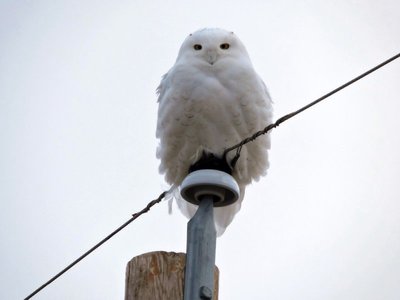 We followed it around the preserve as it flew around from perch to perch, hunting for rodents. It was so extremely white that it looked like a ghost gliding effortlessly over the grassland. Here are some more photos of this truly spectacular owl: 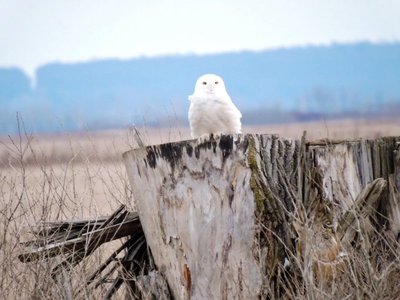 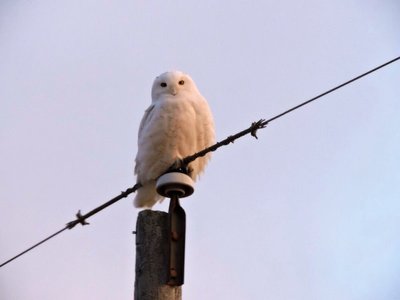 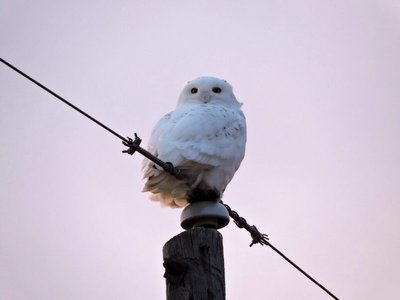 "SNOW" is the birding acronym for Snowy Owl (taken from the SN in Snowy and the OW in Owl), and we saw three Snowy Owls today, so now you know why the title of this post is "SNOWstorm" (although we did pass through a snow shower while driving today, as well).

Bird-of-the-day goes to, of course, the phenomenal photogenic male SNOWY OWL which perched so nicely for pictures. Runners-up to the many BALD EAGLES seen, as well as the NORTHERN SHRIKE. I may post again tomorrow if I see any interesting birds, but if I don't, please stay tuned for possible posts in the near future. In the long run, I have trips lined up for New York City/Washington DC with my choir, the Voice of Chicago, in late June, Costa Rica (!!!) with my school biology group in early July, and my annual journey with my family to Idaho in August.

What a fantastic end to this trip and beginning of the year 2015! May this year bring you happiness, prosperity, and abundant birds. Happy birding!

Posted by skwclar 16:54 Archived in USA

We love the snowy pics!! Glad you're enjoying so many great birds! Happy new year!