This Memorial Day Weekend, my family and I had a short but very relaxing vacation at our lake cottage on the campground we own in southwest Michigan, Warner's Landing Campground: https://sites.google.com/site/warnerslandingcampground/

Before I write about the weekend, however, there were a few birds to break up my busy past week of schoolwork and choir.

Before I left for school on Monday, my dad spotted this GREAT BLUE HERON fly into a TREE in my backyard! This is very, very unusual because this is an aquatic species and we don't live near any large water bodies! 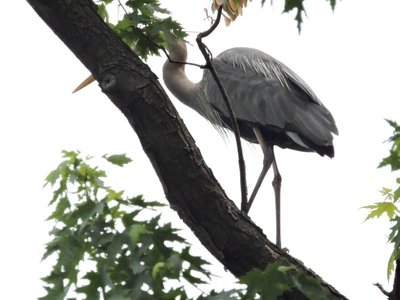 Tuesday was my BIRTHDAY, so that was fun! My best present was a green laser-flashlight that I will use to help point out birds on the Oak Park Bird Walks I lead.

Wednesday was late arrival at my high school at 9:45am, so I led an Oak Park Bird Walk for ten birders before school. 33 species of birds, including a total of 11 warbler species (surprising for this late in spring migration!), were identified on the walk. The most cooperative birds were this male BLACKPOLL WARBLER, my first of the year: 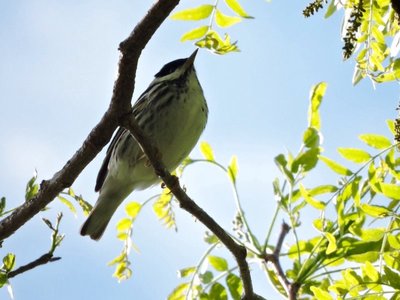 And this VERY late PINE SISKIN - they should have headed up north 2 or 3 months ago! 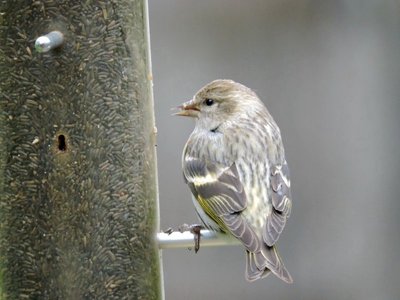 Here is the full avian species list for the bird walk on Wednesday.

After school on Friday, my family and I drove to our cottage in Michigan. Some birding on the grounds yielded some nice, albeit common, species:

This female BALTIMORE ORIOLE on the water's edge was my first bird as soon as I got out of the car! 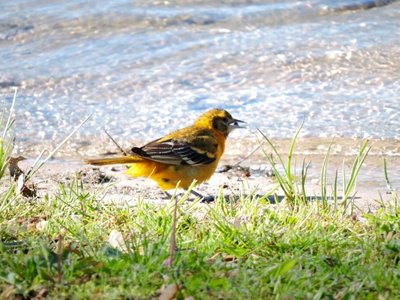 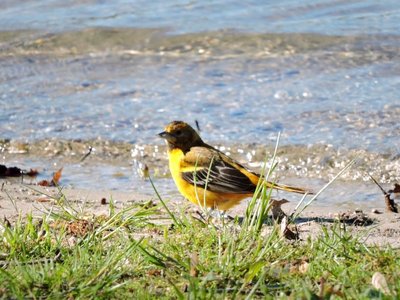 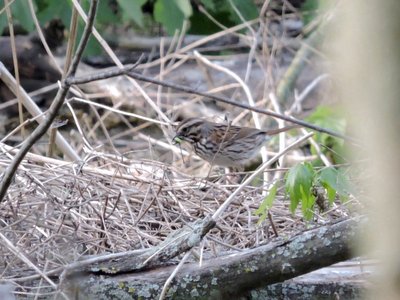 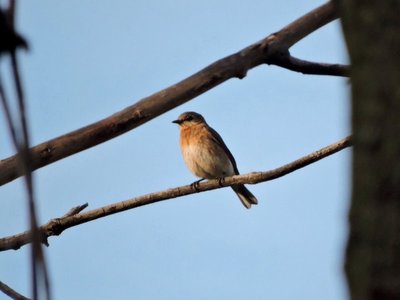 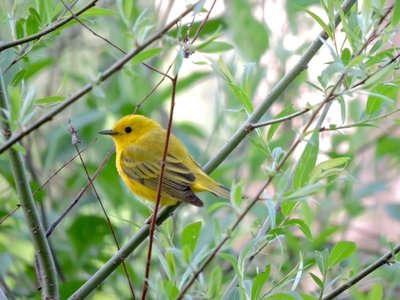 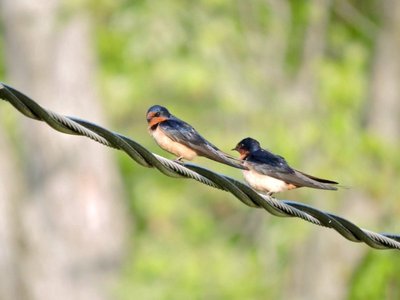 Bird-of-the-day for Friday goes to the female BALTIMORE ORIOLE which was a nice greeting into Michigan, with runner-up going to the male YELLOW WARBLER. Below is the bird list for Friday.

Yesterday, I woke up bright and early and my mom drove me to drop me off at the nearby Yankee Springs State Recreation Area so I could search for the fastest-declining songbird in America: the Cerulean Warbler.

We spotted this FAMILY of SANDHILL CRANES in a field along the drive, which was so cool because I have never seen crane chicks before: 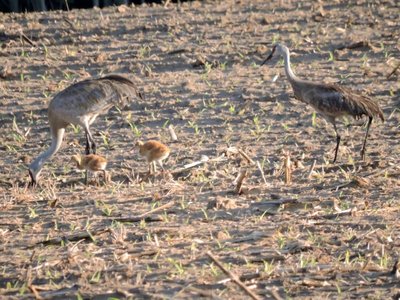 At Yankee Springs, I was soon confronted with a wealth of bird activity. ACADIAN FLYCATCHERS, a very uncommon bird this far north in the country, proved to be so common along the trail that they could almost be considered a "trash bird" there! This is due to the large tracts of fantastic native deciduous and mixed woodland that is found at Yankee Springs. 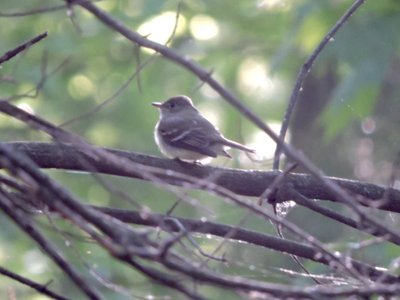 Vireos, such as this RED-EYED VIREO, were also common: 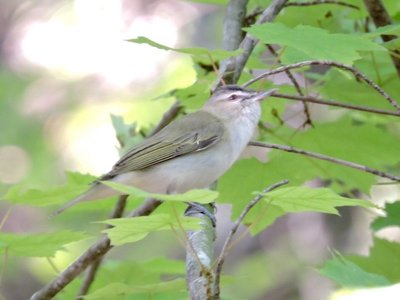 After nearly an hour of birding and hiking, I arrived at the place where I had seen Cerulean Warblers before, but they were conspicuously absent and I didn't hear a single one singing!

Another half hour passed, and I soon entered an area of shorter, scrubbier forest where a wall of bird song hit me. To my pure delight, I soon had my #2 favorite bird singing on my left and my #1 favorite singing on my right!!! My target bird for the day, my second favorite bird, and a federally threatened species, the CERULEAN WARBLER, was piping away his buzzy, rising song on the left side of the trail. A male HOODED WARBLER, my absolute favorite bird and a Michigan state-endangered species, was chorusing his caroling, spirited warble on my right. The Hooded Warbler, although being overall a more common bird than the Cerulean, is considerably more uncommon in Michigan, because the greatest number of territorial male Hooded Warblers documented any single year in Michigan is 12! That means that this bird is one of at most 12 adult male Hooded Warblers in the entire state!!

Because it was my target bird for the day, I searched for the Cerulean first and soon found this tiny, sky-blue beauty flitting around in the bushes to the left of the trail, what a stunning bird: 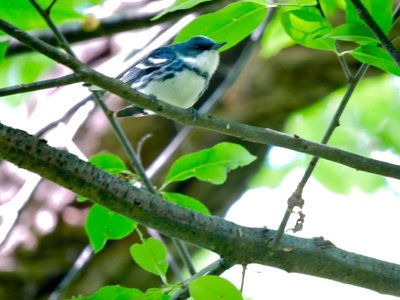 Then, I pursued the Hooded Warbler and after quite a bit of searching through very thick clumps of trees and shrubs, I found this gorgeous bird: 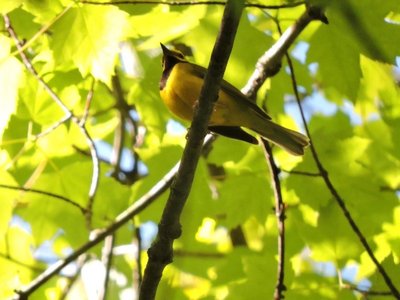 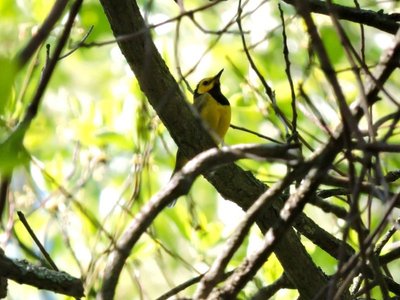 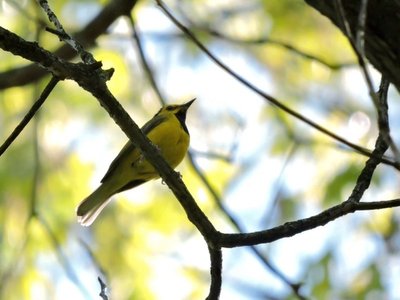 Then, a massive, crow-sized PILEATED WOODPECKER flew in; always a most impressive species to see! This bird is a male due to its reddish mustache; the females have a black mustache. 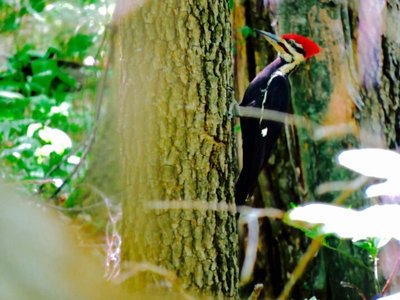 The last bird to be cooperative for photos at Yankee Springs was this stunning male SCARLET TANAGER that always looks like it would belong more in Costa Rica than in central Michigan. 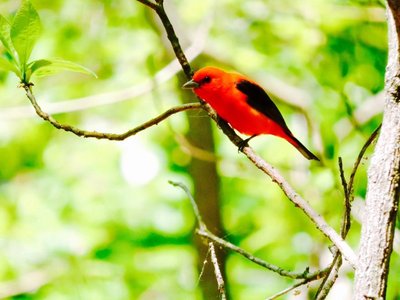 I spent the rest of the day relaxing, casually birding, and kayaking near my family's lake cottage. A couple birds were cooperative for photos: 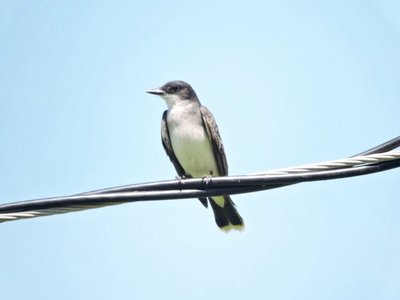 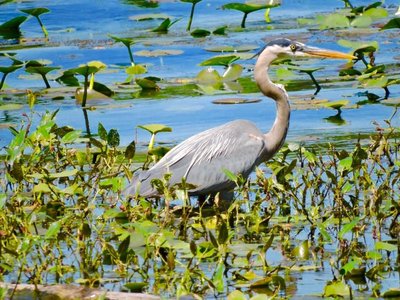 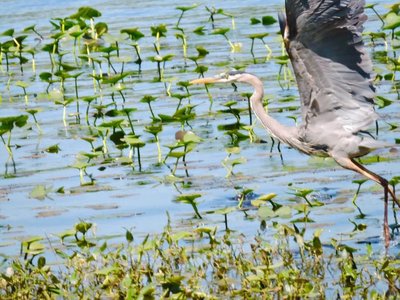 Bird-of-the-day for yesterday goes to the male CERULEAN WARBLER, a federally threatened species, the fastest-declining songbird in America, and my #2 favorite bird of all time. Runner-up goes to the male HOODED WARBLER, a Michigan state-endangered species and my #1 favorite bird species of all time. Birding experience-of-the-year so far goes to having these two birds, my first and second all-time favorite species, singing alongside the trail at Yankee Springs simultaneously!

Here is the final avian list for yesterday, a whopping 74 species in total, including an impressive 16 warbler species, my personal best daily warbler total this year!

Today I was feeling tired and rather lethargic from all of the walking I did on Saturday, so I stayed close to our cottage. It was also rainy outside, so I didn't bother taking any bird photographs. It was a nice, relaxing day however and I enjoyed spending time with my family and taking it easy.

Overall, a great week of birding despite spring migration coming to a close. Stay tuned for more birding adventures because this coming week is my final week of school and I will have much more time for birding with the onset of summer.

Have a happy, bird-filled Memorial Day!

Posted by skwclar 15:26 Archived in USA

Beautiful pictures, the colors of the birds are breathtaking and the woodpecker is really impressive looking. Happy, healthy birthday to you too!!