Sorry about the recent backlog on my blog postings! I have been rather busy, so this post is about my tour I took to New York City & Washington DC from June 21 to June 29 with my choir, the Voice of Chicago. Although there is one bird photo in this post (of course!), this trip was not about birding at all so this is a rare non-birding post!

The tour was so much fun for everyone, some of the best 9 days I have ever had and the choir bonded and musically grew in leaps and bounds.

We flew a Southwest Airlines flight from Midway Airport to Newark Airport in the afternoon of Sunday, June 21. I sat with my friends towards the back of the plane and it was a great flight. We had great views of New York City as the plane was about to land and once we were on the ground, the choir sang a South African song, "Lizela," for the flight crew and passengers. View of the city on our approach: 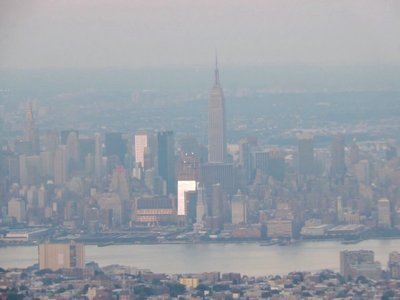 We checked into our first hotel, a very spacious one in Hoboken, New Jersey, and were soon fast asleep.

On Monday, June 22 we woke up bright and early for a ferry tour to Ellis Island and the Statue of Liberty. Some photos are below. 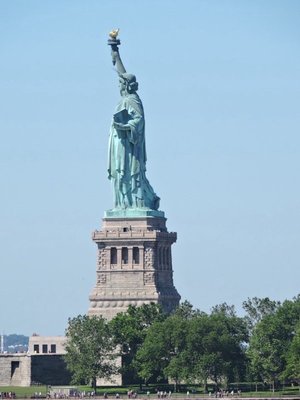 This post wouldn't be complete without a bird photo: a GREATER BLACK-BACKED GULL, a species I have only seen once before, at the London Wetlands Centre in England with my Dad in spring 2014. 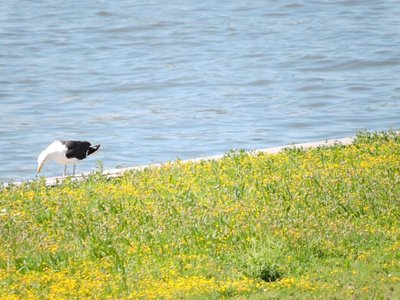 We toured the Ellis Island Immigration Museum - probably some of my ancestors from Ireland, Wales, and other European countries passed through Ellis Island hundreds of years ago. 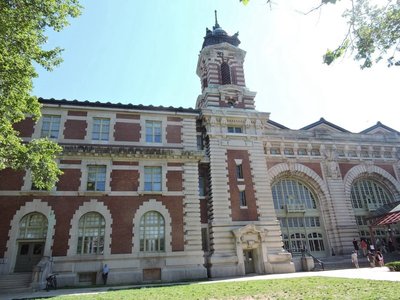 Then we toured parts of Manhattan. Two famous figures of the American Revolution are buried in a cemetery we visited. John Watts: 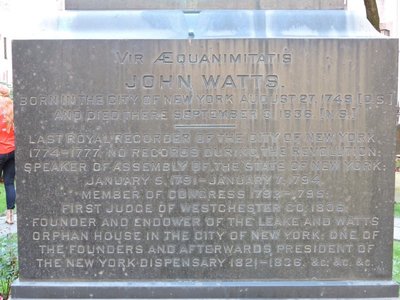 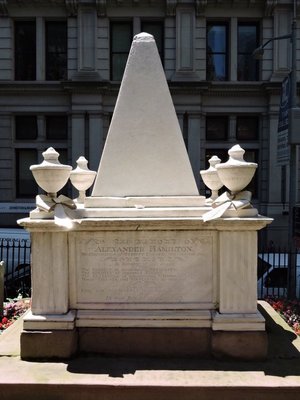 The very touching 9-11 Memorial. We sang a beautiful piece called "Sing Me to Heaven" there. 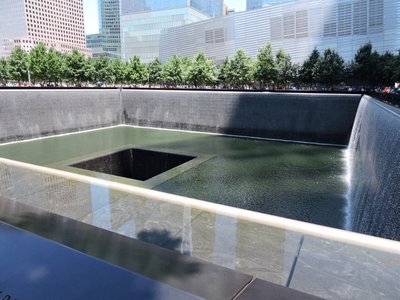 In the afternoon we had a workshop with the New York City Young People's Chorus and the Jerusalem Youth Chorus, and ensemble comprised of young adult Israelis and Palestinians from both sides of Jerusalem. It was a very moving and educational experience and we learned a song called "Give us Hope" from the New York choir and a Muslim piece called "Adinu," meaning "Religion of Love," from the Jerusalem choir.

On Tuesday, June 23 we toured the famous Radio City Music Hall in the morning where we weren't allowed to take pictures except for of the signature book of famous people. I think I spotted John Legend's signature. 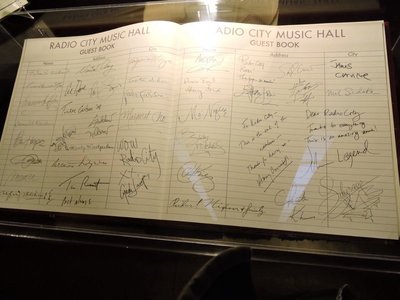 Then, we gave a performance at the headquarters of social media network Tumblr's headquarters, which was great fun. Then we spent the greater part of the afternoon preparing for what turned out to be a wonderful concert with the New York City Young People's and the Jerusalem Youth Choruses. It was extremely memorable to perform songs about freedom and hope with the other choirs, standing among both Israelis and Palestinians.

I can't really remember what we did on Wednesday, June 24 except touring the Top of the Rock (Rockefeller Center), when I realized I had left my camera on the bus for the day! Doh! I also know we switched hotels to one in Midtown a few blocks away from Times Square.

On Thursday, June 25 we spent the morning working with clinicians from Broadway Showchoir Connect on a piece called "Revolting Children" from the musical "Matilda." It involved a lot of dancing which I didn't particularly care for but at least I liked the music. Then, after lunch, we joined and led clinics at the Choirs of America Festival at the Aaron Copland School Music on the north side of the city. In the evening we watched the Broadway musical "Matilda," which is currently "on Broadway." This means that it is playing in theaters with 500 or more seats ("off Broadway" means a musical is playing in theaters with 100-499 seats, and "off off Broadway means a certain musical is playing in theaters with less than 100 seats). It was a great show and the first Broadway musical I have ever seen! After that, we toured Times Square and had a great time and checked into our second hotel of the trip which was only a few blocks away. 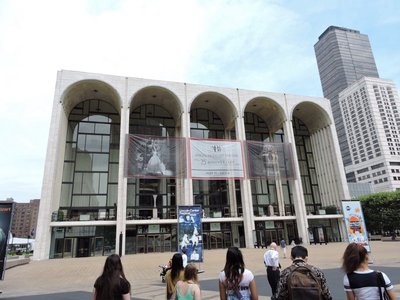 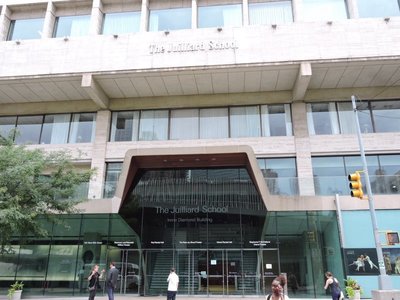 In the afternoon, we prepared for our concert as part of the Choirs of American concert at Carnegie Hall! This marked my third time performing in the most famous concert hall in the world, and it was an awesome experience because we were the featured choir in this concert.

After heading to our hotel rooms after 11:00pm, we woke up at 3:00am - yes, 3:00am! - and drove to Washington DC under nighttime and then dawn skies. A rest stop in Delaware was a new state for me, and we made it to DC by mid-morning. The reason why we left so early was so that we could catch an early-morning tour of the White House. Although it was of only a few rooms in the building, the tour was still a cool experience made better by the fact that afterwards, we sang the National Anthem right in front of the White House. My favorite thing about the White House was getting my life bird FISH CROW in front of it - the only lifer of the trip! Sadly, I didn't get a photo because photography was not allowed on the White House tour. Then, we spent the afternoon preparing for a concert in the Terrace Theater of the John F. Kennedy Memorial Center for the Performing Arts. It was a fantastic concert, probably our best of the year, and it can be watched at this link - I highly recommend watching it to really get a feel for my choir, the Voice of Chicago:
http://www.kennedy-center.org/explorer/artists/?entity_id=227005&source_type=B

Sunday we spent most of the day at the Holocaust Museum, which was extremely moving and included hearing a very informative presentation from a Holocaust Survivor. We even got to sing for and take photos with him afterwards, which was such a cool experience. In the evening, we took a tour of the city. 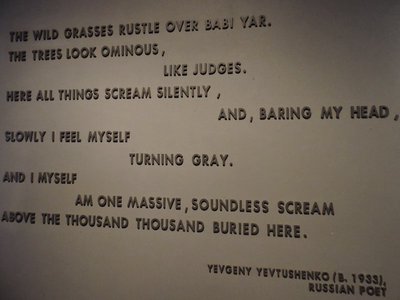 Me in front of the Lincoln Memorial: 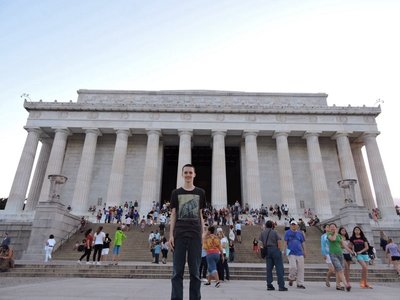 Washington Monument in the evening light: 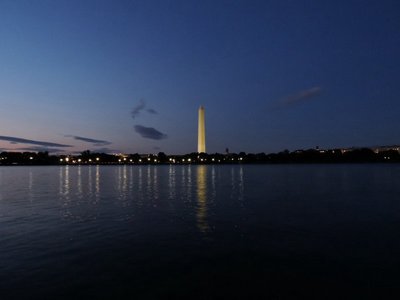 The White House in the night: 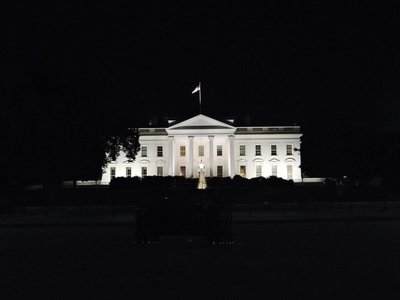 Monday, June 29 was our last day of tour. We spent the day touring the extremely cute town of Alexandria, Virginia. In the afternoon, we had a very hot walking tour of the Arlington Cemetery which was interesting but hard to appreciate because of the stiflingly hot temperatures. We flew home in the evening and thus ended a really, really awesome tour! A big thank you goes to my parents and Chicago Children's Choir staff members!

Bird-of-the-weekend to my life bird Fish Crow, my only lifer of the tour. Runner-up to my first North American Great Black-backed Gull, which was also my only photographed bird of the trip.

Posted by skwclar 19:57 Archived in USA

Thanks, Henry. That was a very informative and enjoyable travel blog. I appreciate learning from you about birds and am now more watchful and aware of birds on the street. New travel information is always good to have.

Hi Henry, sounds like you had a great trip. You saw so many amazing things! Do you hope to go to Julliard? Congrats on your life bird Fish Crow.