Day 5: Journey to the Land of Quetzals

This is the report about my fifth day on my recent trip to Costa Rica, which was Saturday, July 18. I will post reports about days 6-7 later today (July 25) and post about days 8-10 tomorrow (July 26). Then, on Monday, July 27 I will leave for my annual 3-week trip to Idaho with my family, so I will post daily about that starting then. Before reading any further, remember that my #1 target bird for the trip to Costa Rica as a whole was the Resplendent Quetzal, the main target bird I missed when I visited Panama in 2013. I will remind you of this fact at the beginning of every post because this bird was in the back of my mind every moment of every day during the trip, so we'll have to wait and see if I find it sometime!

Again, italics will indicate copied journal entries from the journal in which I wrote during the trip. Enjoy!

6:30am - the boys wake up for a 7:00am breakfast, I pack quickly, and then go birding/apply sunscreen and bug repellent on the back porch of our beautiful cabin at Don Juan's Farm near the town of La Fortuna, Costa Rica.

Here is the forested view from our back porch: 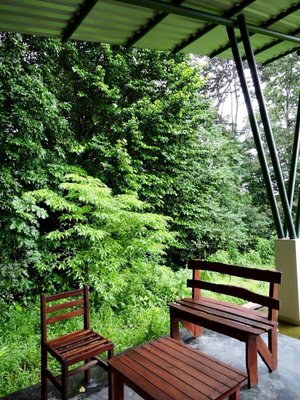 I took photographs of the surrounding views and birds at the open-air dining area during breakfast. The view overlooked a beautiful stream in a dense rainforest: 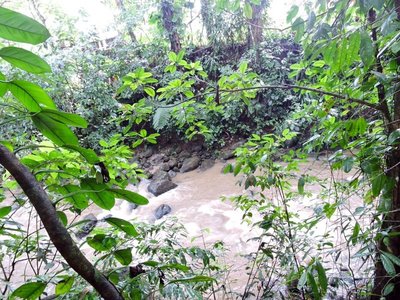 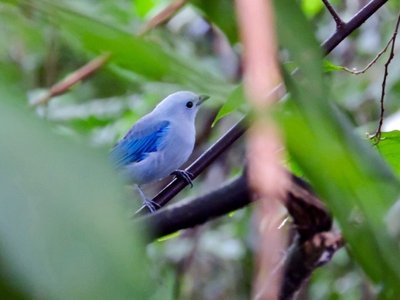 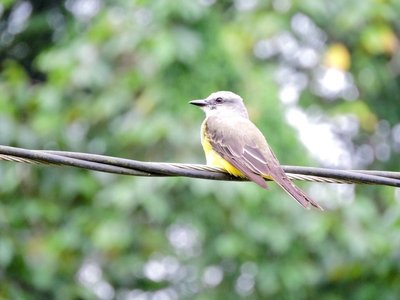 After breakfast, the group had a listening activity in the surrounding rainforest led by our expedition leader, Alexa, where we heard many sounds including: birds, insects (esp: cicadas), our hearbeat, our breathing, cows in the nearby pasture, the wind in the trees, and the nearby stream.

Then, we left Don Juan's for the morning and departed by bus. We stopped by a grocery store and had to pick up groceries for the orphanage we would later visit. We were divided into groups of 4-5 kids and each group had to purchase all of the food from a certiain list in 30 minutes, coming as close to $100.00 USD as possible without going over. This involved converting colones to dollars (w/an exchange rate of 525 colones to the US dollar) and adding sales tax on certain items. Then, we visited an orphanage in La Fortuna where we dropped off our groceries, donated our personal gifts we brought with us during the trip, and played with the kids for about 45 minutes on their outdoor playground. I felt awkward because the language barrier was hard for me, however it was just another barrier I needed to overcome so I put on a positive attitude, tried my best to engage the kids, and ended up having a good time with them and feeling satisfied that hopefully in some little way, I made their lives a bit better. They were good kids and loved playing with us, constantly with smiles on their faces.

After lunch back at Don Juan's Farm for the last time, we spent the afternoon transiting to MONTEVERDE! Monteverde is one of the foremost places in the world to find my nemesis bird for the last two years: the Resplendent Quetzal. This is a very large trogon about the size of a large parakeet or small macaw with iridescent blue-green plumage, a bright red belly, and four truly resplendent extended uppertail covert feathers on the male birds that extend behind the bird nearly 2 times the length of the quetzal itself. It is truly a spectacular animal and my #1 hope for this trip is to see one of these.

From Don Juan's Farm, we took a half-hour bus ride ride to a 45-minute boat ride across the beautiful Lake Arenal, a reservoir and the largest lake in Costa Rica.

Here is another nice view from the bus: 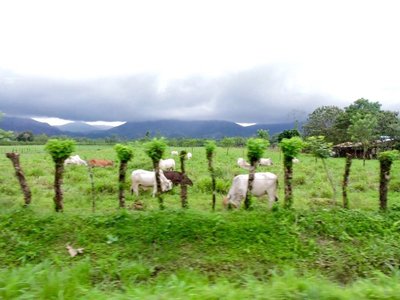 RINGED KINGFISHER from the boat: 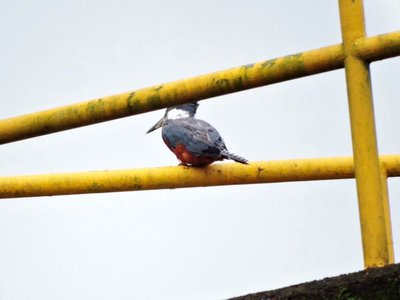 MANGROVE SWALLOW from the boat: 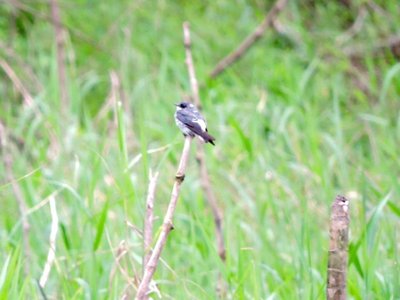 BRONZED COWBIRD from the boat: 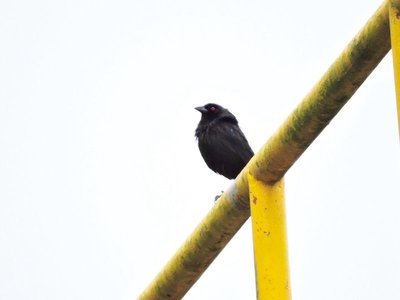 The group played a game of "Costa Rican trivia" while on the boat and I won this coconut-flavored lollypop for knowing that San Jose's airport is not in San Jose proper, but in the city of Alajuela. 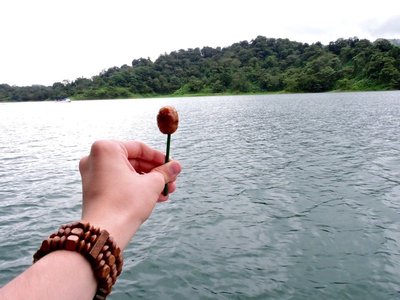 While on the boat, we were afforded breathtaking views of the mountains, including the amazing Volcan Arenal, formerly one of the most active volcanoes in the world. 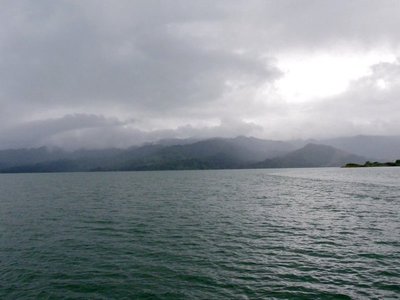 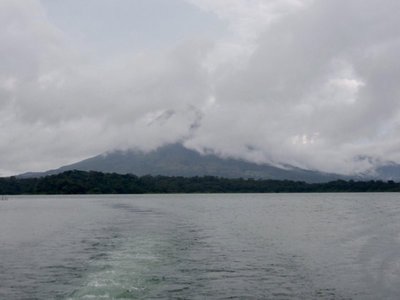 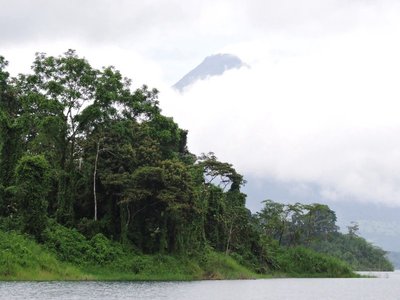 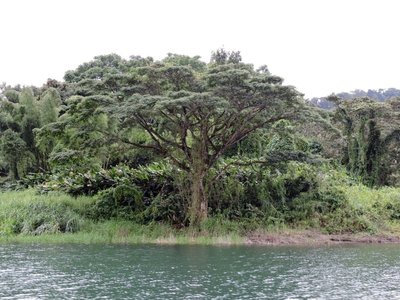 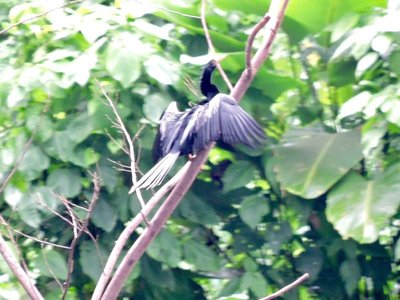 While we boated across the lake, our bus driver, Louis, braved the long and bumpy road that twists alongside Lake Arenal. We beat Louis and did not expect to see him until we arrived at Monteverde in the evening simply because the road is so terrible. Once on the shore, we had a quick bathroom break and then boarded two shuttle buses for the extremely long and very bumpy road up to the town of Monteverde.

While at a pit stop along the drive up the mountains, we suddenly heard a honk on the road and it was Louis and our nice bus! He had made record time and we got to drive up the bad road in the comfortable bus the rest of the way to Monteverde! We treated Louis like a celebrity the rest of the trip because this is truly an unprecedented driving feat - he made "No Barriers' history," as our expedition leader, Alexa, put it!

Once we arrived at the beautiful lodge at Monteverde in which we would stay for two nights, I birded a bit on the grounds which turned out to be SUPER productive.

Here is a SOCIAL FLYCATCHER I found: 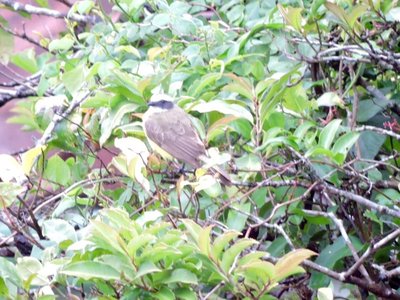 Andrew, my roomate, and I are in a deluxe room with an awesome balcony with beautiful views of the surrounding mountains that stretch for miles all the way to the Pacific Ocean! It is a great place. It is also much cooler here, in the 70's during the day as opposed to the 90's, because we are in the higher mountains and with higher elevation comes lower temperatures.

Views from the common area in the lodge: 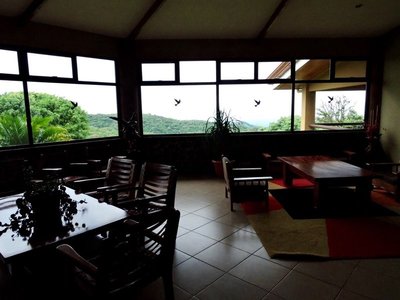 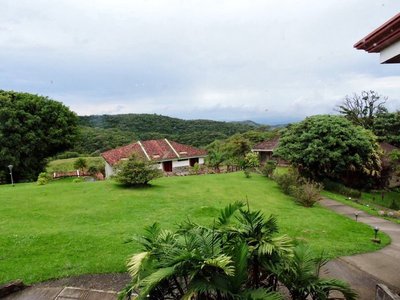 Views from our hotel room: 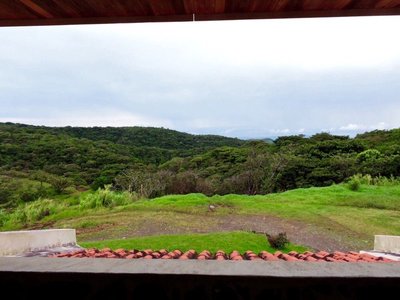 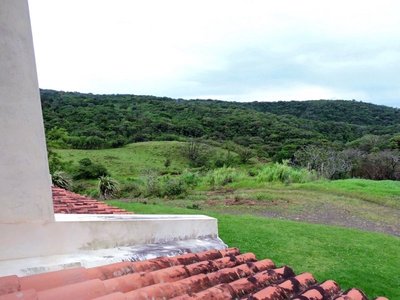 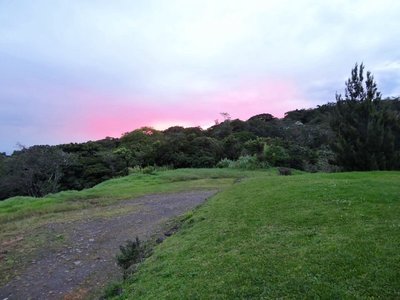 The group was in very high spirits that evening. 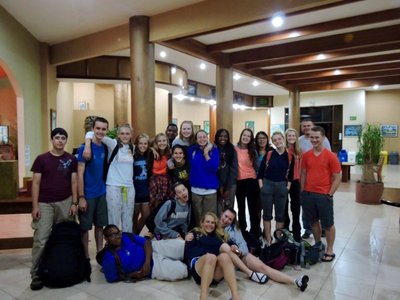 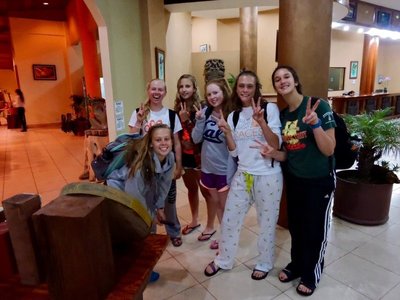 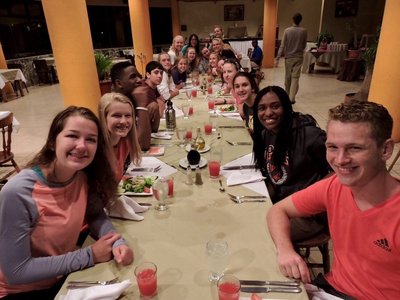 After dinner at the lodge, we ended our day with the No Barriers' "Mid Trip Meeting." We were all in fantastic moods, we discussed the trip, had so many laughs, played a game of musical chairs where I provided the music by singing, and played many other team bonding games. Although we had such a great time, it was at that "Mid Trip Meeting" that our first wave of nostalgia hit us in that this fantastic trip was already half-way over - unbelievable!

After the meeting, all of us boys went to the other boys' room and watched part of a movie. Then, Andrew and I returned to our room and I managed one okay photograph of a spectacular lightning storm that we saw from our balconies but miles away over the Pacific Ocean: 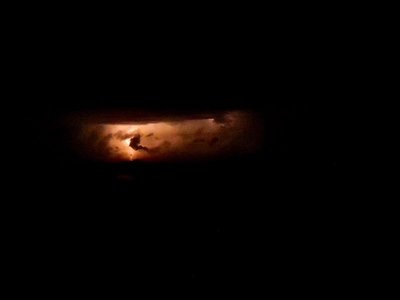 I am SO excited - tomorrow is my one and only chance to find my #1 target bird for this trip, the Resplendent Quetzal!

The full avian species list for the day is below. Stay tuned and good birding!