Day 7: From Ziplining to Stargazing

This is the report about my seventh day on my recent trip to Costa Rica, which was Monday, July 20. I will post about days 8-10 tomorrow (July 26). Then, on Monday, July 27 I will leave for my annual 3-week trip to Idaho with my family, so I will post daily about that starting then. Again, italics will indicate copied journal entries from the journal in which I wrote during the trip. Enjoy!

I awoke at 6:10am to the striking sounds of the very uncommon Three-wattled Bellbird calling from the cloudforest behind the lodge in which we were staying in Monteverde. At 6:30am, I joined our guide Mario and a select group of people for a guided bird walk around the lodge property. Although we didn't see the hoped-for Bellbirds, we did find some other neat things... 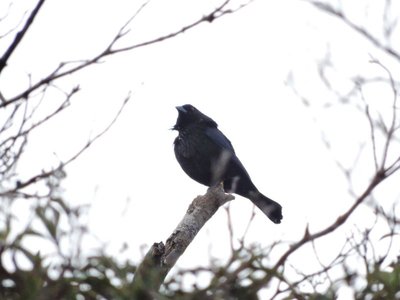 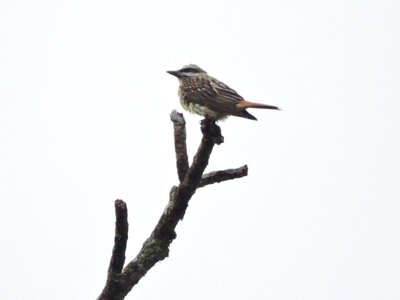 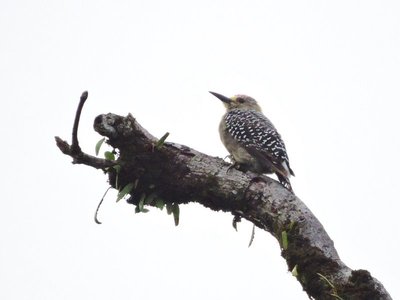 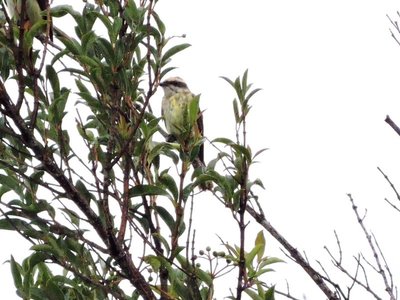 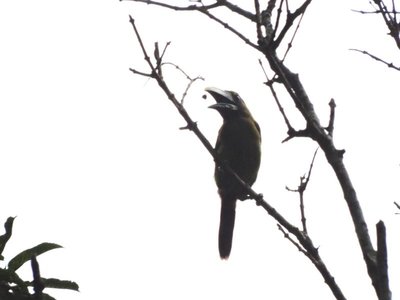 Next, the group had our last meal at Monteverde; breakfast in the dining hall at 7:00am. Before we bussed to go ziplining at 8:00am, I managed to photograph some of the hummingbirds frequenting the lodge's great feeder display.

There was also a beautiful rainbow providing for great photo opportunities from the luxurious balcony of the dining hall: 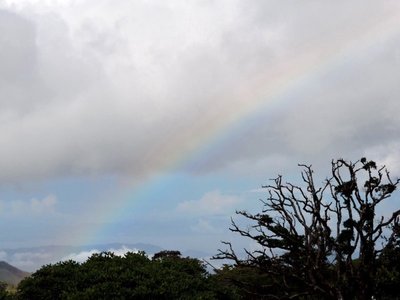 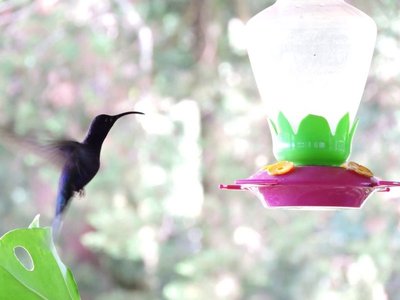 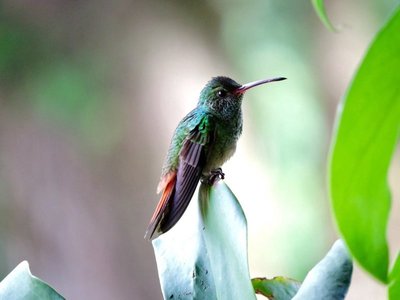 By 8:00am, we had left for ziplining. I did not take any photos from this because our group leader, Alexa, wisely advised me to leave my camera on the bus due to safety issues presented by bringing it ziplining. After a bit of waiting around in lines and taking a while to attach all of the necessary gear to ourselves, we were finally ready to go and soon I was zipping down the first wire, gliding over the fog-shrouded cloud forest and, for a few precious moments, only seeing the trees and clouds below and around me. It was SO much fun and very thrilling - even better than the fantastic ziplining I did in the cloudforest of Panama! There were 16 courses that take one from one treehouse in the canopy of a large cloudforest tree to another, and the ropes themselves were super long - a few appearing to completely disappear into the clouds from the perspective of someone waiting on the platform. It was mind-boggingly beautiful.

Towards the end, I came to a platform that was 30 feet high and from that platform, you are attached to a rope which was attached to another platform in front of you. After one is attached, you are pushed off the ledge by one of the employees and are in free-fall for a frighteningly long time until the angle of the swing catches you a few feet above the ground and you start to swing wildly back and forth. It was scary, but so much fun!

The afternoon was spent on a long and bumpy but fun bus ride to our next destination: the town of Sarapiqui on the Pacific Coast side of the Nicoya Peninsula in northwest Costa Rica. We had many pitstops along the way in order to make the ride bearable, and one place was an easy way to see SCARLET MACAWS (where they feed them), an elusive species elsewhere in the country. 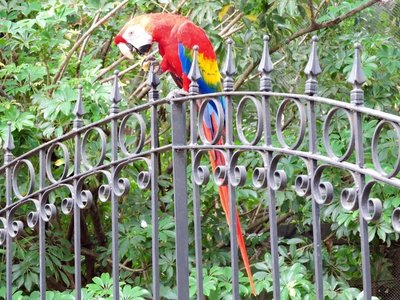 I also got my life bird RUFOUS-NAPED WREN there: 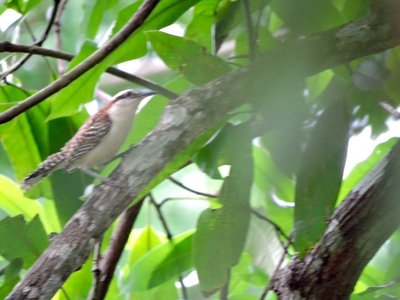 An unplanned stop was to admire a rare DOUBLE-STRIPED THICK-KNEE in a pasture alongside the road: 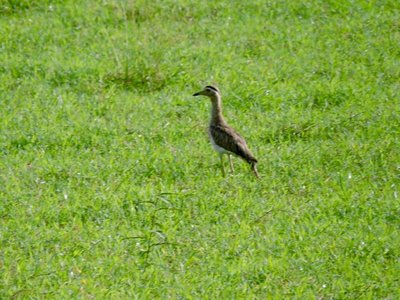 I also spotted a female EASTERN MEADOWLARK at this location: 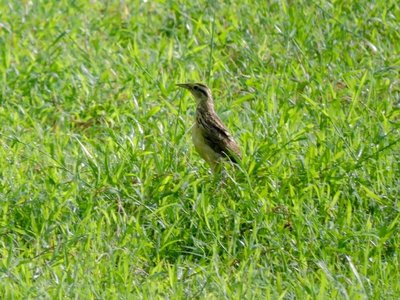 Finally, in the late afternoon, we made it to the one lodge in Corozalito where we would be staying for the next two nights. We were happy to be off the bus! 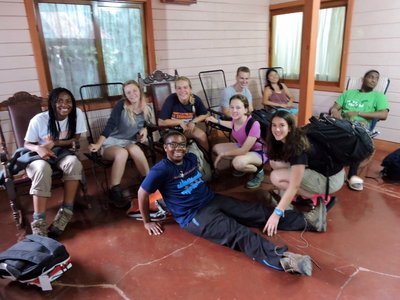 I wrote this entry right after eating dinner: We walked to dinner, a restaurant/outdoor family dining area of a house accessed from the lodge via a dirt road, which included fording a shallow stream to get there - very cool! I am having a fantastic time and never want this trip to end!

After dinner, our night activities were at the local Corozalito Beach where we stargazed and watched nesting sea turtles: When we arrived at the beach in the pitch blackness of nightfall, the group layed in a circle on the beach with our backs on our beach towels and our heads facing towards the center of the circle. For an hour, we gazed up into the vast, milky canvas of the night sky which cultivated a very meaningful and "deep" group conversation about the night sky, its importance in the natural world, and why it is such an obvious natural wonder but somehow seemed foreign to us Chicagoans. Whenever one felt the spirit, one would start a sentence with the phrase "I wonder" - and we kept this up for well over forty five minutes. It was an awe-inspiring and truly thought-provoking experience made even better by the fact that while we were laying down in the circle, a huge Olive-ridley Sea Turtle lumbered by us on her way to dig a burrow in which to lay her eggs under the beach. After she passed, we slowly got up and watched, with our nocturnal-friendly red headlamps, the mother, as well as a second mother, sea turtle lay dozens upon dozens of eggs in the sand. Then, we watched as one of the turtles slowly covered her eggs back up, lethargically turned back towards the ocean, and we followed her on her mighty trek across the sand all the way to the water's edge, where she paused for a few moments and then disappeared into the Pacific Ocean - never to be seen again by us.

Since we were only allowed to use our red headlamps on the beach, I only managed two very poor-quality photos during the evening, but here they are, nevertheless. 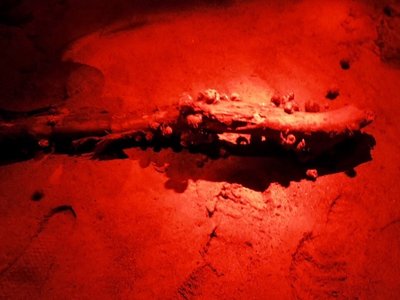 The dark patch to the upper right side of the patch of light is the faint silhouette of one of the mother Olive-ridley Sea Turtles seen that evening: 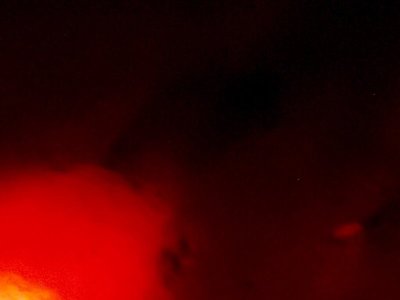 It was a truly life-changing evening and the group was back at the rustic lodge in the town of Corozalito at 11:00pm, successfully exhausted and eager to retire for the night.

What another fantastic, inspiring day in the beautiful country of Costa Rica.