This is the report about my eighth day on my recent trip to Costa Rica, which was Tuesday, July 21. I will also make posts about days 9 and 10 later today (July 26). Then, on Monday, July 27, I will leave for my annual 3-week trip to Idaho with my family, so I will post daily about that starting then. Again, italics will indicate copied journal entries from the journal in which I wrote during the Costa Rica trip. Enjoy!

Please note that I did not have my camera with me for most of this day for logistical/safety reasons, so this is not a photo-heavy post despite the group having spent a good part of the day at the very photogenic Corozalito Beach. Also, I focused all of my energies on this day towards the group activities so, apart from spotting a flyover MAGNIFICENT FRIGATEBIRD, I did not do any birding on this day.

The boys awoke at 7:30am to go to breakfast at the beautiful, small, open-air restaurant where we ate all of our meals during our stay in Corozalito. I had rice and beans (the staple food in Costa Rica), cheese, and toast

From the "cabinas" where we were staying, it took a beautiful, short walk down a dirt road, which included fording a shallow stream, to get to the restaurant: 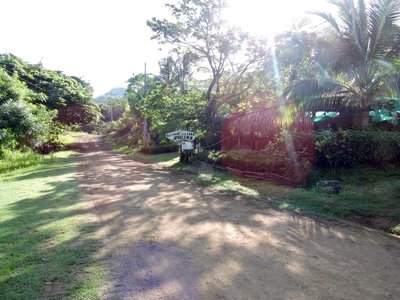 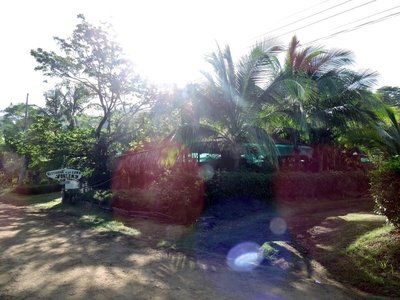 After breakfast, we walked back to our "cabinas" to gather the last of our personal donations which we had prepared for children who we would visit in a one-room schoolhouse later in the morning which was literally right next door to the "cabinas."

Once all of the donations we were gathered, we waited for the staff and had one of our last "free times" of the trip: 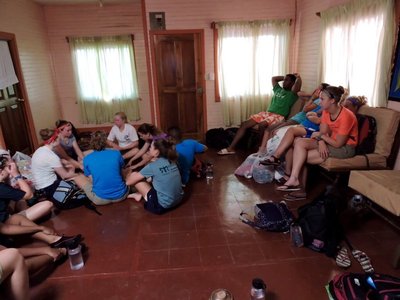 Then, we walked over to a one-room schoolhouse right next to our lodge. We met the 6 4th-6th grade kids who were having school in the morning (9 1st-3rd grade kids would replace them in the afternoon) and immediately started playing with them. It was a fantastic experience to play with and connect to these children (Corozalito is a very small, poor town) by playing games such as duck-duck-goose and heads-up-seven-up with them. After forty five minutes or and hour, we gave the children our personal donations and said our goodbyes...for the morning (we would later play with them in a soccer game in the evening).

Next, we got changed and bussed to the nearby Corozalito Beach where we saw the stars and sea turtles the previous night. I immediately wished I had brought try camera because it is a beautiful beach surrounded by rolling, green bluffs. Soon after we arrived, the group was split up into smaller groups of 2's and 3's, each group was given a garbage bag to fill with litter from the beach, and Alexa told us we had 30 minutes (until 11:23am...how do I remember that?!) for each group to pick up as much litter as possible in order for the winning group to earn an ice cream treat.

Riley and I ran up and down this beach carrying our garbage bag on our backs, sweating in the 90-degree-heat, but having a fantastic time cleaning up SO much rubbish from the beach...when we returned after 30 minutes, we had the fullest garbage bag and had won the game!

After that, the group went swimming in the Pacific waves and we had a BLAST. The entire group was on a huge positive high from this the rest of the day. The water was like warm bathwater, the weather was hot and sunny, and the waves were just high enough to have a lot of fun but not to be dangerous.

After swimming, we had a picnic lunch on the beach and then bussed back to the lodge, where most of the group used our afternoon free time to swim in the hotel pool (immediately after returning from the beach!). It was so much fun; definitely something to remember in the cold Chicago winter...

After refreshing in our cabin, the group came back together and we walked over to Corozalito's soccer field, a mere ten paces from the "cabinas." We split half of the about 15 local children present into two teams, and half of our group joined one team, and half, the other. It wasn't my personal favorite activity of the trip because I am not great at soccer; however, I kept a positive attitude and tried my best because I knew playing this game would be overcoming a "personal barrier" of mine because of this, and also it would be transcending a "group barrier" because, since both groups knew how to play soccer, we didn't have the need to use language for most of the game - so we connected through both groups giving their all in the game and always smiling. It was a great experience.

After soccer, we returned to the school house that we visited earlier and we listened to a fairly interesting lecture on the locally nesting sea turtles from the local nonprofit that studies their nesting habits.

Then, at 6:30pm (it was already dark by then), we walked down the trail and forded the stream to have our last dinner at the restaurant. Dinner was spaghetti and it was pretty good. Then, we had one of our last group evening circle meetings on the chairs and benches set up under a covered common area next to the pool back at the "cabinas." It was another heartfelt meeting where we discussed our trip, the impacts of us on Costa Rica, and we made a rough outline of the most important events of the trip in our journals. It was another powerful and meaningful meeting and we were all feeling a bit nostalgic because it was our penultament circle meeting and they have been great hallmarks of our amazing journey.

After our meeting, we returned to our rooms for our second-to-last night in the stunning country of Costa Rica. We worked on our thank-you gifts/presentations for Mario (our nature guide), Louis (our bus driver), and Alexa (our expedition leader) that we would finish on the long bus ride back to San Jose the next day. These three special people were fantastic the entire week and were always making sure that we had a safe but also exciting and fun-filled trip. Thank you so much Mario, Louis, and Alexa!

Here is my thank-you card to Alexa: 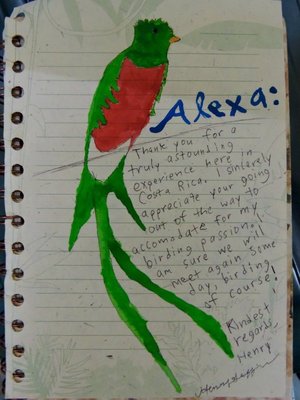 And a really special thank-you presentation my friend Justin made for Mario, Louis, and Alexa. 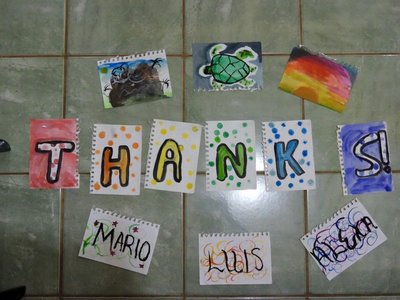 We finally retired to our beds well after midnight, having already started our last full day in Costa Rica before we were asleep.