This is the report about my ninth and second-to-the-last-day on my recent trip to Costa Rica (also our last complete day within the country), which was Wednesday, July 22. I will also make a post combining my Costa Rica trip recap and day 10, my travel day home, later today (July 26). Then, tomorrow (Monday, July 27), I will leave for my annual 3-week trip to Idaho with my family, so I will post daily about that starting then. Again, italics will indicate copied journal entries from the journal in which I wrote during the Costa Rica trip. Enjoy!

It just dawned on me that this might be among the last times I journal while actually in Costa Rica. I have been so immensely changed forever by this trip to this phenomenal country of Costa Rica so that now I am a "responsible global citizen" who shows compassion not only for the environment but for other people and cultures.

I woke up at 6:00am for a bird walk around the "cabinas" property in the beautiful little town of Corozalito on the Pacific Coast of Costa Rica. That bird walk with Mario, our last one of the trip, as well as with four other people from the group, was great and very productive and we saw quite a few high-quality avian species... 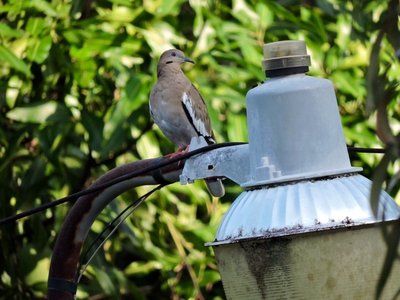 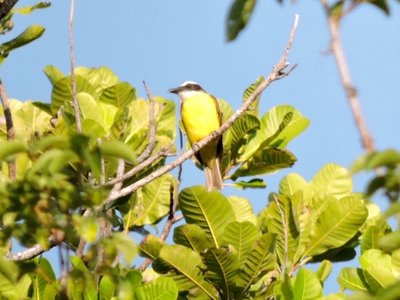 Female HOFFMAN'S WOODPECKER, probably the most common woodpecker during this trip: 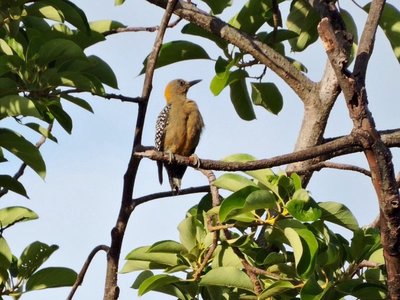 I was absolutely delighted when Mario pointed out this fabulously beautiful TURQUOISE-BROWED MOTMOT perched on a nearby wire - what a stunning life bird! 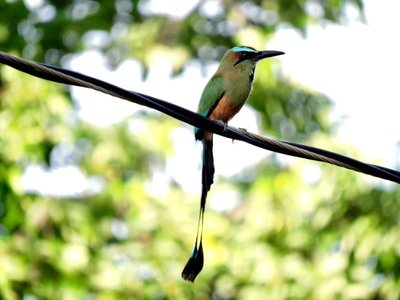 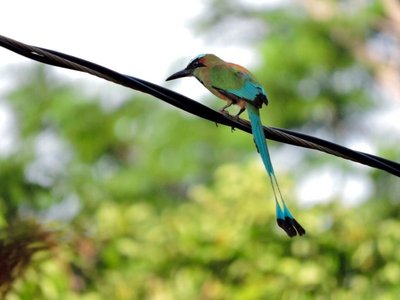 GREAT KISKADEE, an omnipresent bird throughout Costa Rica because of its adaptability to many different habitat types: 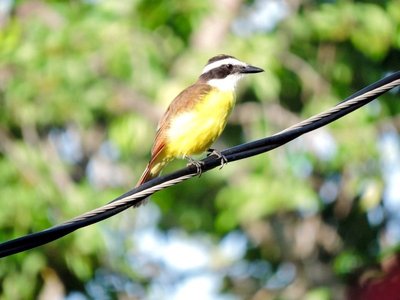 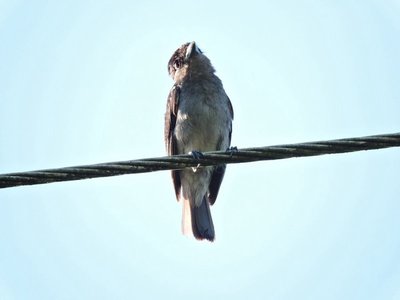 At one point, we crossed a very lovely and tranquil stream: 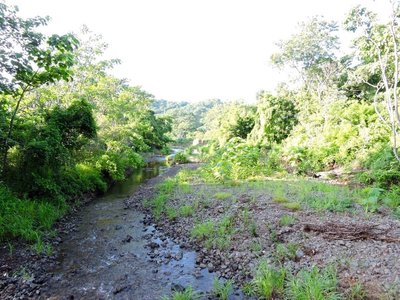 INCA DOVE, a species that is expanding its range into Costa Rica from the north: 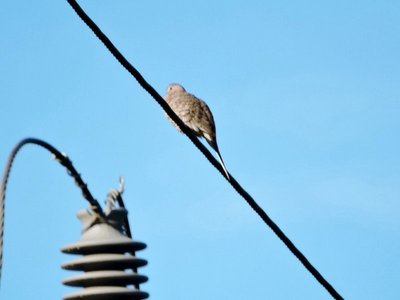 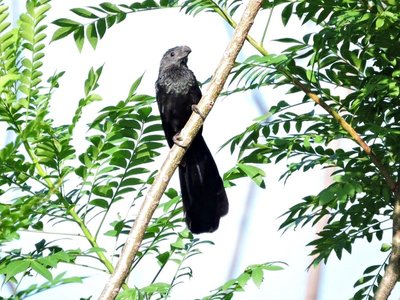 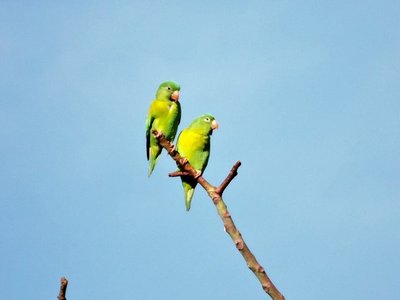 After breakfast, our last meal at the familiar restaurant in Corozalito, we headed back to the "cabinas" to get ready for the short, but steep hike to the place where we would have our "closing ceremonies" circle meeting.

Before we left for the hike, I snapped this photo of the boys' "cabina," the mostly-obstructed yellow structure behind the miniature palm trees: 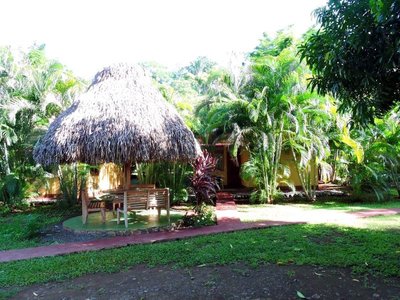 Although it was hot outside and the trail had steep footing, the group cherished our last hike in nature in Costa Rica. We soon arrived at a magnificent giant fig tree, but it, surprisingly, was not the one where we would have our closing ceremonies. 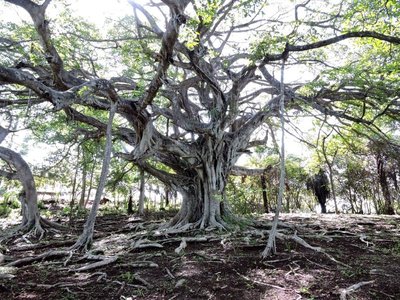 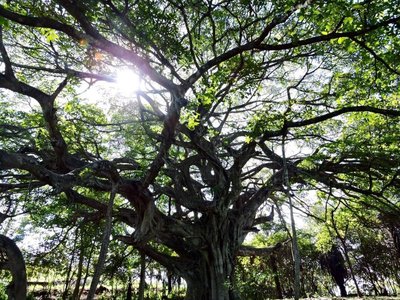 Soon, the group arrived at the appointed tree, which was equally impressive, and we all squeezed onto a semi-circle of rough wooden benches that were under the shade of the giant, reaching branches of the fig tree.

Some cattle came in from the nearby pasture and decided to join us for our meeting: 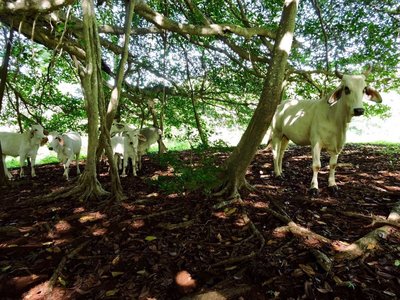 The closing ceremonies were extremely special and touching; we started by closing our eyes and simply listened to the sounds around us, which included many things like the rustling and breathing of the nearby cattle as well as the distant lap of the waves on Corozalito Beach - a moment I will never forget. After that, we ripped out a sheet of biodegradable paper from our journals and wrote a wish to the world and a promise to ourselves regarding ways we would change our lives in order to create a better world. After sharing those wishes and promises with the group, we walked back to the "cabinas" in silence, taking in the nature around us and thinking about what we had just discussed and written during our closing ceremonies.

Then, we packed up, bid farewell to the trusty Corozalito "cabinas," and started our day-long bus trek back to the city of San Jose.

A pretty church along the drive - over 70% of the Costa Rican population is Catholic: 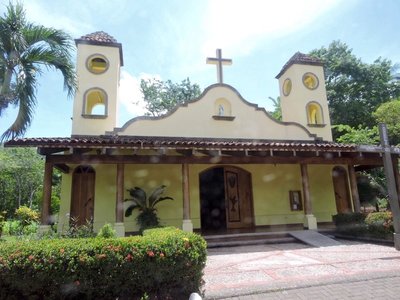 Our first stop was impromptu when Mario and Alexa spotted a troop of Howler Monkeys in the trees and wires hanging over the road. The group laughed when, after I had gotten out of the bus, a monkey scared me by jumping to a branch just five feet over my head! 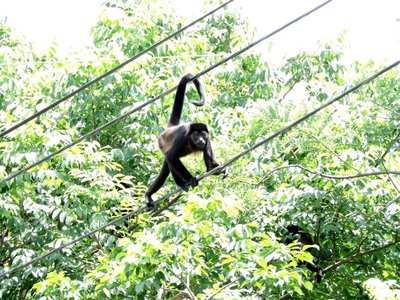 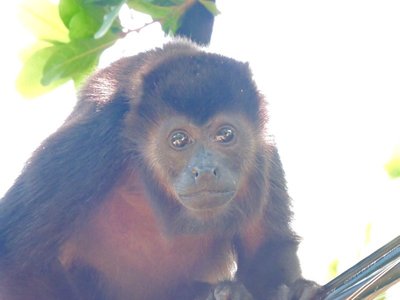 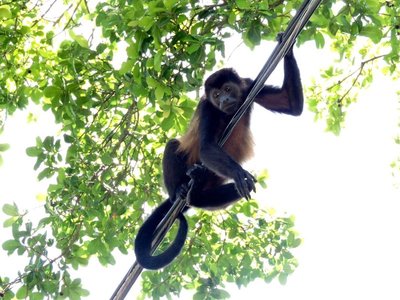 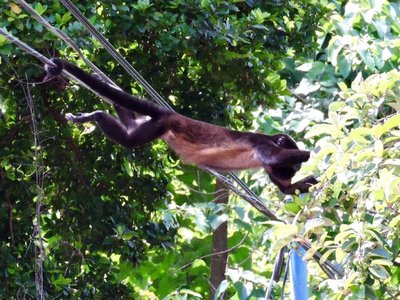 We spent most of the morning part of the bus ride sleeping, however things got very exciting when the people sitting in the back half of the bus had to get up and stand in the aisle in the front in order to balance out the bus because all of the luggage was underneath, in the back. We had to balance out the bus because there was a bridge that was being repaired over a river, so we had to use the alternative "road" and ford the river! Our awesome and always-reliable bus driver, Louis, forded the river like a pro and we were soon safely back on pavement. 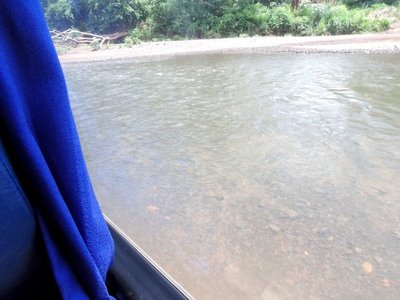 The group had a very late lunch at the exact location where I found the Scarlet Macaws on the way into Corozalito and then we bussed to an ice cream parlor with absolutely delicious ice cream. I got a cone with one scoop of chocolate almond and one scoop of mint chocolate chip.

The bus ride the rest of the way to San Jose was really fun with a lot of singing, laughter, and planning of the thank-you surprises for Alexa, Louis, Mario, and Mr. Farley. We stopped at one souvenir store and then, in the evening, we arrived back at the hotel in San Jose; in fact, the same one as the one in which we stayed the first night of the trip. When we checked into that same hotel, a wave of bittersweet nostalgia hit the entire group as we realized that we started this fantastic, life-changing trip from this very place. In order to celebrate this accomplishment, we had our last evening circle meeting of the entire trip in the lobby of the hotel, where the group presented Alexa, Louis, and Mario with thank-you cards and gifts; and the boys and girls even had a sing-off by changing two pop songs' lyrics to "Costa Rica thank-you" lyrics and performing the songs for the three of them.

The group posing for a photo with Mario: 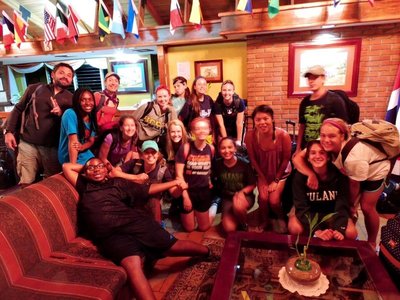 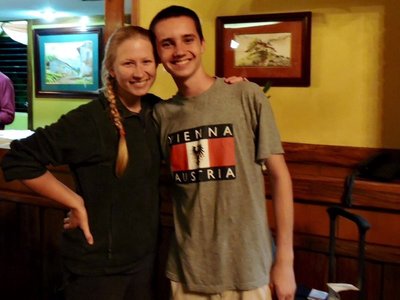 The girls performing their thank-you song for Louis and Mario: 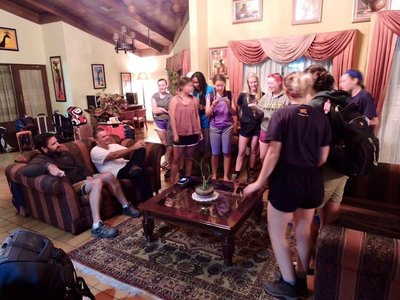 Mario (left) giving an appreciation speech to the group about what a fantastic time he had: 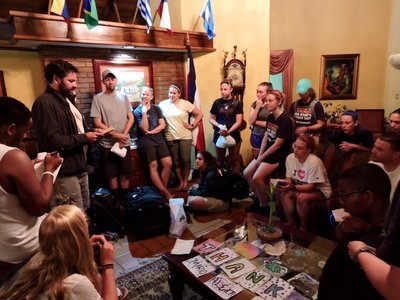 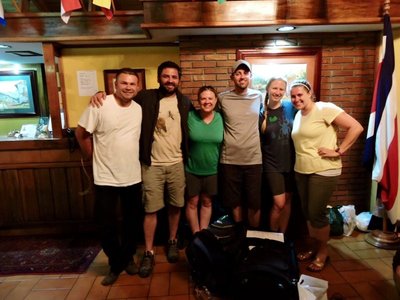 After the lovely group meeting, the group bussed to a great dinner at a restaurant in San Jose. I had a tasty nacho dish and enjoyed lively conversation with all of my friends. We also presented Mr. Farley with a cake because after this trip, he would not be a teacher at OPRF anymore because he would be moving to St. Louis to be closer to his family.

Before we knew it, it was time to drive back to our hotel for our final night in the enchantingly beautiful land of Costa Rica.