Travel to and Day 1 in New Zealand!

I am groggily writing this report, so please excuse any silly errors. This blog post covers from Saturday, January 11 largely in America to Monday, January 13, our first fullish (6:00AM-midnight) day in New Zealand. Sunday was non-existent for my family and I due to the International Date Line which we crossed over on the flight to New Zealand.

On Saturday, January 11, Chicago date, my mom, my sister (Pearl), and I were picked up by our favorite taxi at half-to noon. My dad is still on his CSO tour to the Canary Islands, so he will be unable to join us for about a week. We proceeded to the airport, and that was where the fun began. We tried to check our bags, but the computer wouldn't let us for some reason. So, we flagged down an airport employee, and she obviously had all the time she could possibly have on her hands, because she sauntered over to us at what would barely qualify for a slow speed. After explaining to her our simple problem (which she had managed to turn into a big one by making us repeat every word we said), she told us to go to a travel agent. Then we were like, "Which travel agent?" She pointed vaguely northeast and said, "Him, over there." The problem was, the airport was absolutely packed with people and there were multiple travel agents around. So, when we FINALLY saw the agent she was pointing two, after about a minute of flagging him down and making a fool of ourselves in front of the entire airport, he acknowledged us with a vague wave. Then, it took him about two minutes to walk thirty feet over to us (not because the airport was crowed, which it was, but because he chose to walk at about quarter=40), the recurring theme for the day. After explaining to him what had happened, he ever so slowly got behind the computer and soon figured out that our travel plans had been electronically switched. The flight from San Fran to New Zealand was shown first and the flight from Chicago to San Fran next. I am sure that those airline folks have sense enough to correct that mistake, right? WRONG. Absolutely incorrect. He explained to us that we could fly the flights in the proper order, but once we arrived in San Fran we would have to collect all of our bags at the claim and then re-check them again in the international terminal! How stupid. Anyway, after at least forty-five minutes of trying to check our bags, we finally arrived at security. And the line there was so long it could rival the length of the Great Wall of China. So, we mentally prepared ourselves for a grueling wait, gritted our teeth, and joined the line of miserable travelers.

Suddenly, an airport employee started shouting, "Security 3, no wait! Security 3, no wait!" He opened the line and the back half of the line (including us) shuffled across the airport to Security 3. The line was marginally better at best. We soon heard a group of people in their twenties mocking the employee, "Security 3, no wait!" Honest to goodness, my family and I felt like joining in at that point. Finally, after at least a half-hour wait in the security line, when everyone was putting their luggage, shoes, and whatnot into the bins, we heard a crash from just in front of us. After a moment, it was revealed that the man controlling the security had accidentally pushed some of the bins off of the shelf, one of which included someone's laptop. The owner of the laptop handled the situation quite well however, only saying, "You broke the screen off of my computer." to the employee and then continuing through security. After security, our family hustled to the gate and we were the only people there. To our relief, we learned that everyone else had boarded, but the plane hadn't left, so we boarded the plane and flew an overall uneventful flight to San Francisco. The wintery mountain scenery was beautiful from the plane.

Once we arrived in San Fran, we begrudgingly headed down to baggage claim to pick up our stuff. My mother was still very disgruntled about that situation, so we devised a plan, which we were sure would work. After ten minutes of searching for the international terminal, we found it, and waited in another endless line, which definitely improved our morale greatly. Finally, once we arrived at the baggage check-in counter, we explained our situation calmly and politely to the travel agent at the counter, and we asked for an upgrade, if possible, to business class. The travel agent flatly stated that the plane was 100% full and that flights getting electronically switched is just impossible. My mom said she would have agreed with him until today, and showed him our checked and now unchecked bags as proof of this harrowing situation. He still didn't believe us, so we were out of luck. At this point, my mom and I started snapping at him because he didn't even apologize on behalf of his airline for the trouble he had caused our family. With one last perturbed look over my shoulder, we trundled off to security, our other bags now re-checked. Thankfully, we got in the shorter security line (the first lucky thing that happened to us that day), and were soon through security. Then, our family traveled all the way down the terminal to find our gate, all the way back up the terminal again to find the United Club, all the way back down the terminal again to find something to eat (which we didn't find), and then all the way back up to the United Club. We had two passes for the United Club, but we had three people, so we put our bargaining caps on and marched up to the lady at the desk in front of the United Club. We explained that we had a pass for my mom and I, but not one for Pearl, but since she was so young and small could she get in free? Nope. So, in retaliation to that, I grabbed a few candies off of the front desk. The lady gave me a rather disgruntled expression as we glared back at her. At that point, we were almost yelling, telling her to have sympathy for us, who had just had about the worst travel day imaginable. We would still have to pay fifty dollars to get Pearl in, too, so after I threatened to come back and steal more candies, we stormed off.

Finally, after quite a but of searching, at the exact opposite end of the terminal we found a sandwich shop and ate and relaxed there, all of our tempers slowly fizzling down with the tangible relief of food, glorious food.

After a couple hours, we had made it onto our plane, a huge New Zealand Airlines 747. We jammed ourselves into three Economy Class seats and prepared for what would turn out to be a twelve-hour red-eye flight with less than an hour of sleep for all of us. On top of that, there was rather extreme turbulence at one point, which always heightens my fear of flying during the experience.

Finally, just at dawn, we arrived in Aukland, New Zealand (it was the smoothest airplane landing I had ever experienced). We groggily trudged through countless long lines, and after over an hour, we were finally in our car. That was when the fun started.

My mom had enrolled me as the "Navigator", so I had to tell every single direction off of the cheap, confusing, printed Google directions. For the first part of the drive, it went horrifically, because driving on the "wrong" side of the road as well as having these frustratingly vague directions confused me greatly. At one point we even had to pull over and retrace our steps. Within ten minutes after that, we soon noticed that New Zealand drivers' favorite game is tail-gating. It is like there is only a foot between every car, even when you are moving at 60 miles per hour!

Our first stop was at a random park. I saw a few birds, including this Common Myna pictured below: 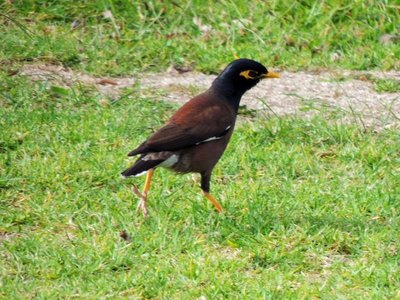 After another ten minutes of driving, we stopped at our next stop, Wenderholm Regional Park. I saw a wealth of great birds, including the ones pictured below.

This Fantail was a very friendly little bird. It twittered around our feet as we walked around, eating the bugs we stirred up by walking. In this picture you can tell why it is named a Fantail. 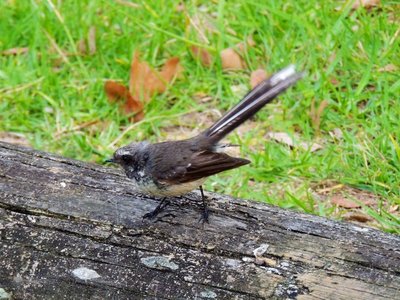 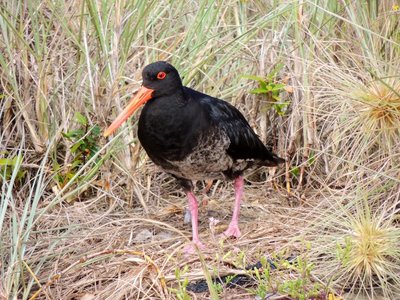 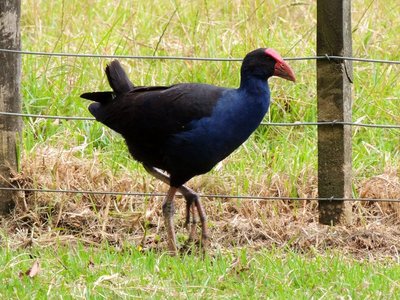 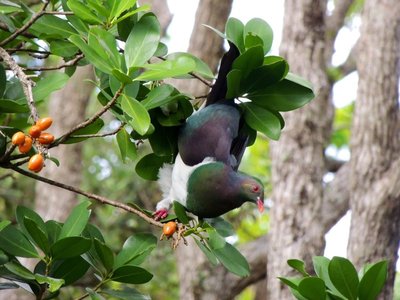 Anyone know what type of plover this is? I certainly don't. 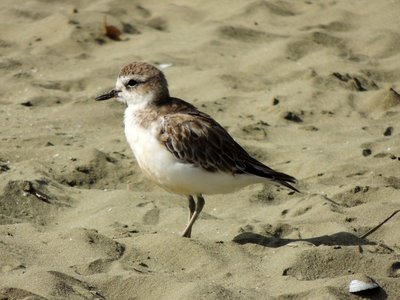 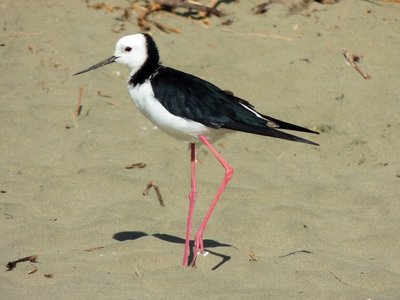 Before arriving at our comfortable motel, we had one more stop at a magnificent waterfall: 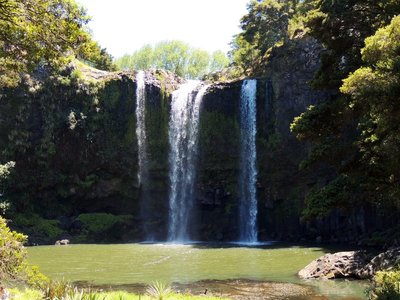 I now have 433 confirmed life birds, up from 428 only a few days ago. If people chime into what birds are pictured in the photos without names, I will be able to get my life list up. Bird of the day was the funny little Fantail which was such a friendly, beautiful, native little life bird (a bird I have never seen before).

As a last note, I will mostly be posting at what seems to be very odd times to most viewers of this blog, so just bear in mind the time difference, and please constantly check for updates.

Great hearing about your trip, Henry. To help with future travel out of Chicago, I would recommend getting TSA preapproval. http://www.tsa.gov/tsa-precheck-program The program just began last month. It was great. The lines were short,no taking off shoes, unpacking computers or liquids and no big X-Ray machines. We cleared security in 2 minutes at ORD and Orlando. My trip to Europe was fraught with airline ineptitude so I can sympathize with you. It took all my patience to problem solve, because no one else was willing to. Be sure to correspond with the airline customer service and complain about their error. You will be rewarded with frequent flyer points and you can take another world trip next year!! Love,m