I am taking a lazy day off birding today (although I did get one photo of a STELLER'S JAY from the condo today) because I had a huge birding excursion yesterday which this post is mainly about. Enjoy!

The Great Gray Owl has been a "nemesis bird" of mine for years - in fact, the only one other than the Resplendent Quetzal until I finally found the Quetzal in Costa Rica last month. I have tried to find this elusive bird - an amazing, large owl - in so many places including Yosemite (CA), Yellowstone, & Grand Teton National Parks (MT & WY), Sawtooth & Salmon-Challis National Forests (ID), and the Sax-Zim Bog (MN). Here are the links to posts I have made about all of the times I have searched for this phantom owl (one post is even from my former Blogger birding blog!):

Yesterday I teamed up with local birder Ryan Anderson who generously offered to drive me and bird with me for the afternoon and evening in search of the Great Gray Owl which is ALSO a nemesis bird for him as well! We planned on birding near the Stanley area in the Sawtooth Valley in central Idaho where there have been a few "hotspots" where the owl has been seen lately.

We met up at 2pm and were soon on our way driving north on Highway 75 towards Stanley. Our first noteworthy bird species, a covey of DUSKY GROUSE, was found alongside the road just after Ryan advised me to start having my eyes peeled for some interesting birds!

Here is the mother with two of her six chicks in the background. This is a very interesting chicken-like bird species that inhabits montane coniferous forests; I have only seen it once before. 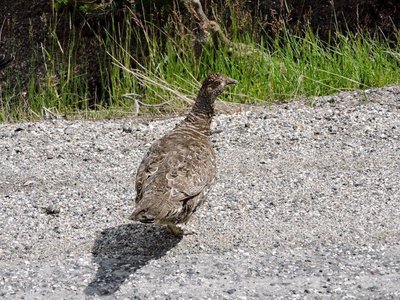 Here is one of the chicks: 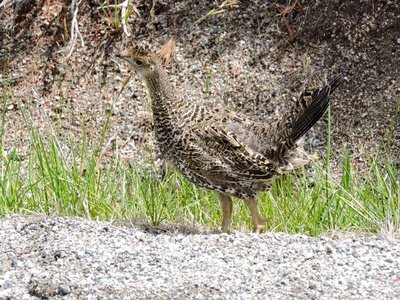 While driving through the Sawtooth Valley, we spotted this CLARK'S NUTCRACKER, a species of jay, perched on a distant tree: 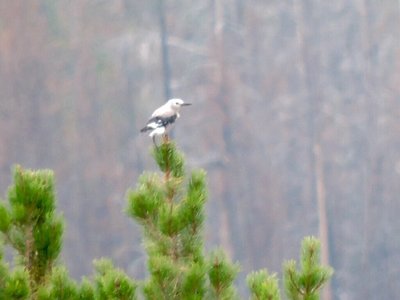 We arrived at Stanley Lake around 3pm and would spend most of the afternoon birding in the vicinity. Here it is with the beautiful Sawtooth Mountains just behind it: 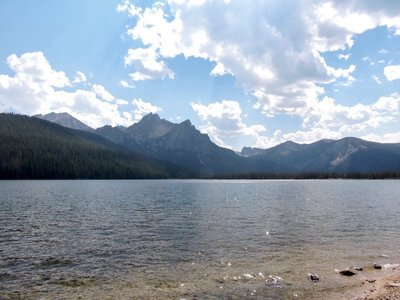 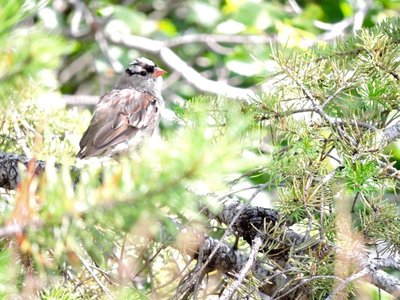 For about five minutes, we were convinced this small woodpecker was Ryan's lifer American Three-toed Woodpecker; however, after reviewing a bird guide, it turned out to be a juvenile female RED-NAPED SAPSUCKER: 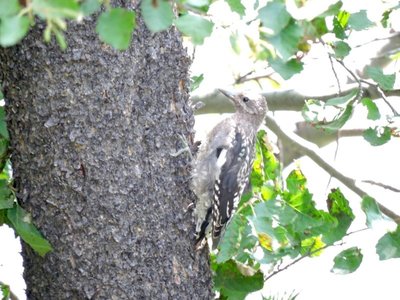 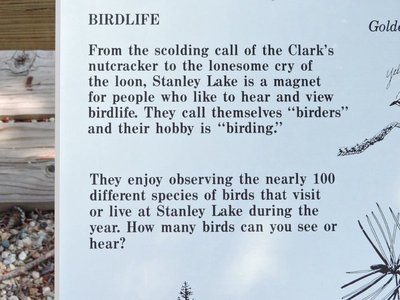 Then, we spent a good chunk of the afternoon hiking about 2/3 of the way up the nearby trail to a small waterfall called Bridelveil Falls which we didn't see. We hiked this trail because it is listed on the "Idaho Birding Trail" and quality birds like American Three-toed Woodpecker, Spruce Grouse, and even Great Gray Owl have been reported along the trail in the past. We would end up seeing one of those species...but which one? Stay tuned and find out later!

This apparent hybrid Yellow-rumped X Bay-breasted Warbler seen along the trail still has me scratching my head...does anyone have any insight as to what this mystery bird could be?

UPDATE August 11: Jay Carlisle, a kind Idaho birder, confirmed this bird to be an "Audubon's" race of YELLOW-RUMPED WARBLER with stains from fruit explaining the "chestnut sides" to the bird: 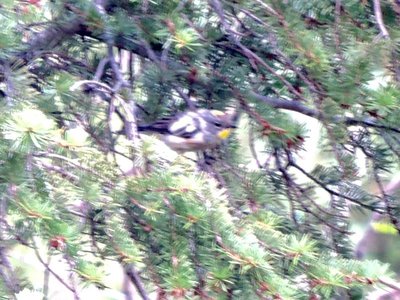 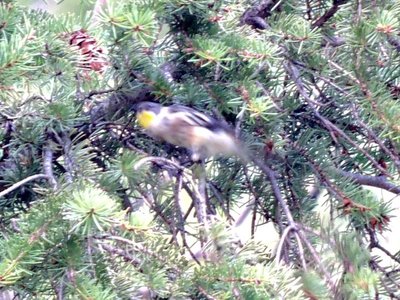 The trail had some beautiful views: 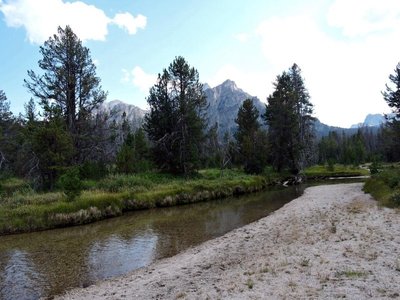 Barely a minute after I asked Ryan if we would be seeing a Townsend's Solitaire, we spotted this TOWNSEND'S SOLITAIRE at the tippy-top of a very large tree! 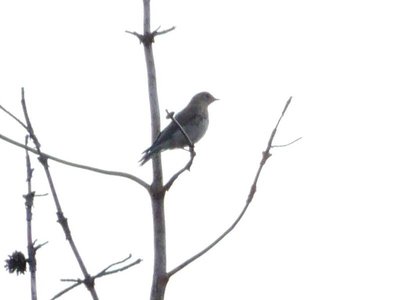 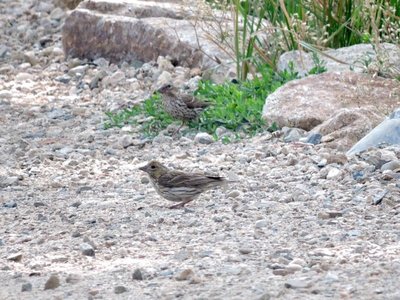 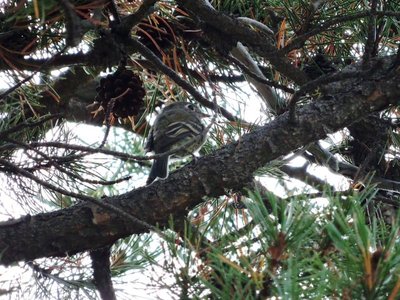 This uncommon female MACGILLIVRAY'S WARBLER was a surprise since this typically shrubland-loving species was in the middle of a coniferous forest. I guess it is the beginning of fall migration for songbirds, after all! 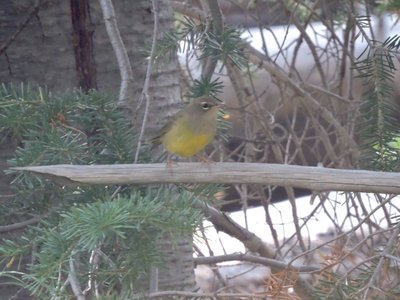 This cute pika was also a nice surprise. This is a small rodent of high, rocky alpine areas in the Rocky Mountains. The last time I saw this animal was in 2009 when I visited Rocky Mountain National Park with my family! 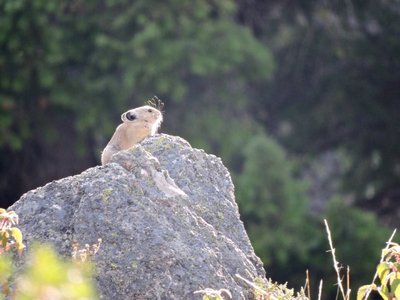 After finding these uncommon AMERICAN THREE-TOED WOODPECKERS along the trail, Ryan did a "lifer dance" because this species was a life bird for him! Congrats, Ryan! 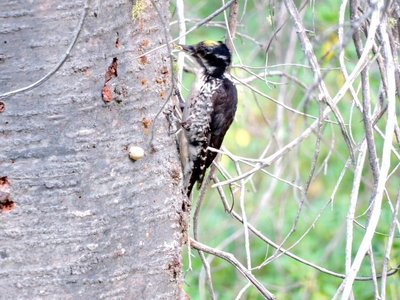 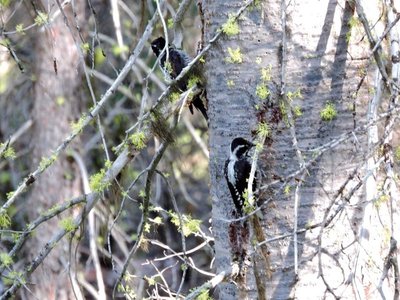 Another stunning view of the Sawtooth Mountains: 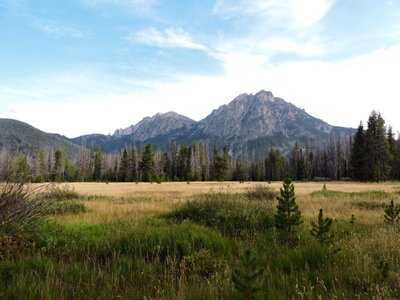 After talking about wanting to see an OLIVE-SIDED FLYCATCHER the entire hike, we finally found this one as we neared the trailhead at the end! 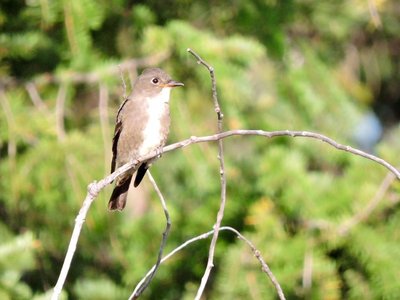 Then, we drove to a place called Park Creek Overlook where Great Gray Owls have been reported recently. 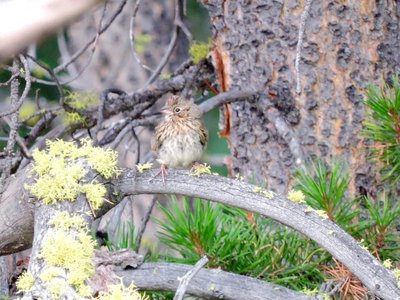 Nice mountains in the evening light: 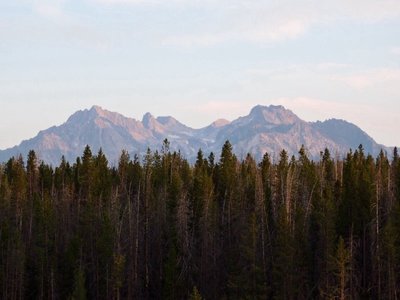 At one point, we flushed a large owl that flew far into the forest; however, we only obtained a very brief look at it, determining it was either a Great Horned or a Great Gray Owl - but not a good enough look for a positive identification! How frustrating! 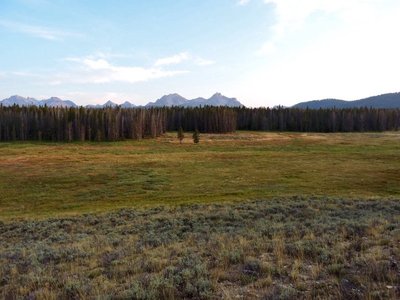 Alas, we did not find the owl but decided to check one more location and then return to Park Creek for one last scan before we would call it a day. It was quickly nearing the nine o'clock hour at this point.

We then drove part of the nearby Cape Horn Loop Road System where Great Grays have been known to hang out. Here is a herd of elk running away into the forest: 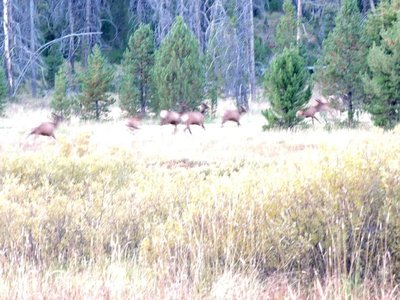 At this location, we also positively identified the raucous cries of my life-bird young NORTHERN GOSHAWK but didn't get to see him.

On our way back I showed Ryan a Great Gray Owl nest that was used by them in 2014 that I had directions to; however, Great Grays are nomadic and for the protection of their young they nest in a different location every year. We found the remnants of their former nest but once again failed to find the owls! 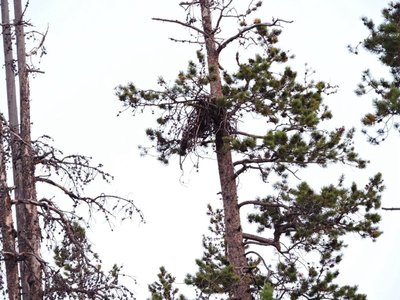 Shortly before we arrived back at Park Creek Overlook for a final scan, we found a mini-flock of four uncommon GRAY JAYS: 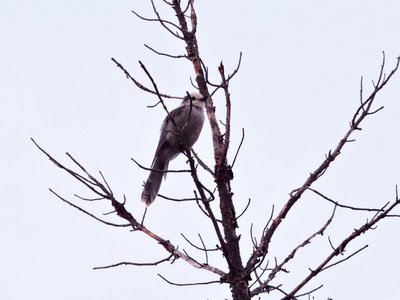 Female MOUNTAIN BLUEBIRD at Park Creek Overlook while we were scanning for Great Gray Owls: 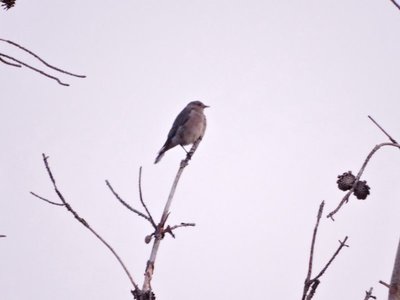 And the third time did NOT make the charm yesterday as we were not able to locate those darned Great Gray Owls! We were in the right location at the right time but they decided to remain our nemesis!

Despite missing the owls, Ryan and I had a great time - and thanks SO much to Ryan for driving all of the way!

Although the Great Gray Owl remains a nemesis bird for me, I will go on an intensive search for that species later this week with two experienced birders from the area: Kathleen Cameron and Poo Wright-Pulliam. This will be part of our annual Idaho "big day" and will involve searching for the Great Gray Owl!

Today is a lazy day spent recovering from yesterday's activities and relaxing at the condo area. The only bird I photographed today was this nice STELLER'S JAY: 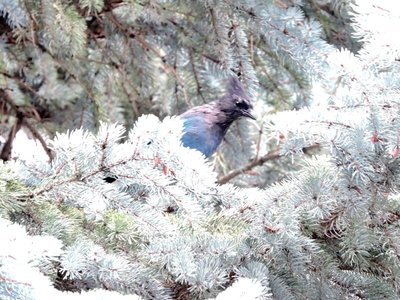 On a completely different note, today I posted my first report on my other birding blog called "Arrivals and Influxes." This is a blog that was started by young birder Nick Minor and is devoted to giving nightly "migration forecasts" for Illinois about what to see and when to go birding during spring and fall migration. It is very scientific and quite different from this blog in that it is not at all devoted to bird sightings and trip reports but to the science of birds and literally forecasting bird migration. Since Nick is a freshman in college this year, I have taken it over and will write nightly migration forecasts for Illinois every spring and fall until I go off to college. Hopefully you will check it out and maybe even subscribe!

The full avian species list from yesterday's outing is attached below.

Posted by skwclar 14:15 Archived in USA