Tonight will be a three-post night because I am VERY behind-schedule in posting due to three awesome, full days of birding I have had here in the Sun Valley area of Idaho. Two days ago, Thursday, August 13, my mom and I took a great hike in the mountains and then I spent the late afternoon/evening birding with two awesome birders and seeing awesome birds.

While my sister Pearl was at the nearby YMCA day camp, my mom and I hiked the High Ridge Trail in the eastern Boulder Mountains of central Idaho. This was a steep trail, 6.5 miles round-trip with 1,600 feet of elevation gain; however, it had great birds along the way and a spectacular, worth-the-hike payoff. This hike was in a beautiful sub-alpine ecosystem, ranging from 7,800 to 9,400 feet above sea level and flirting with the treeline at times. We were hiking from 10:00am to 2:15pm. 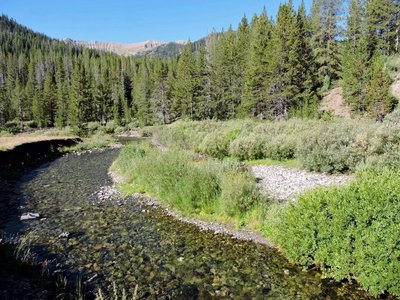 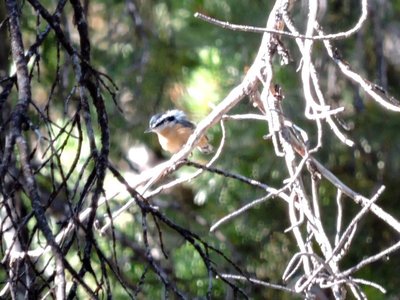 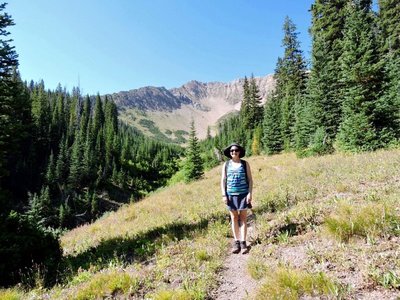 There were many views along the trail that looked exponentially better in real life than they do in photos, such as this high ridge of alpine mountains: 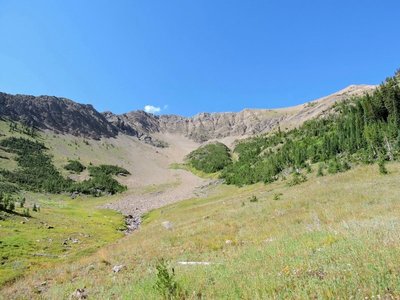 Female MACGILLIVRAY'S WARBLER, an uncommon species especially at such a high elevation: 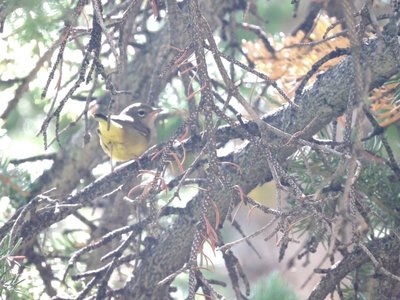 The payoff of the hike was a rocky outcropping on on a very high ridge with absolutely stellar views such as this: 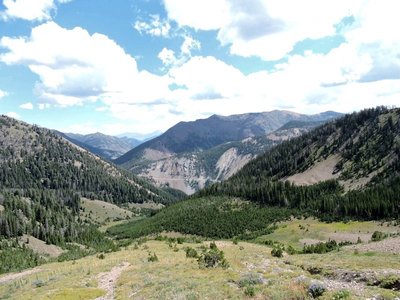 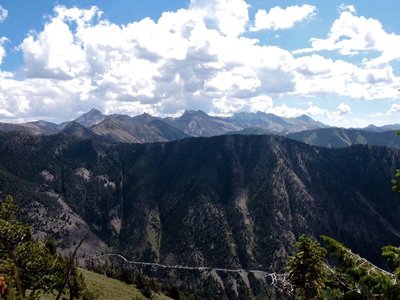 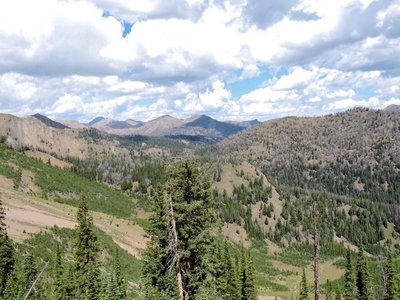 While eating lunch at the rocky outcropping, my first of five life birds for the day, a WHITE-THROATED SWIFT, quickly flew overhead - too fast for any photos but a satisfactory-enough look for identification: a swift, larger than a Violet-green Swallow and with a noticeably white throat.

A great bird seen on the way down was this ROCK WREN, and, true to its name, it was found on a large alpine scree (rocky) slope. 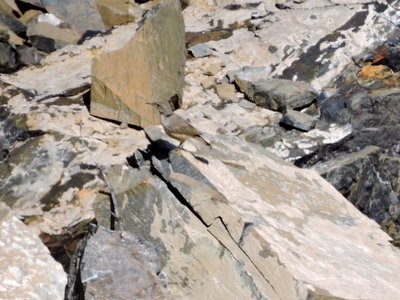 At the trailhead, this beautiful adult male RED CROSSBILL, a very uncommon to rare species, allowed for outstanding views: 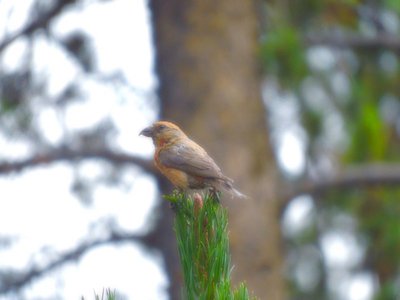 After arriving back to the condo at 3:00pm, I showered, practiced trumpet, and then it was time to leave for my evening birding excursion! My mom and I met local birding and artist celebrity (and blog subscriber!) Poo Wright-Pulliam in downtown Ketchum and I left with Poo to drive with her down the Wood River Valley towards her house near the town of Hailey. At her house, we met another awesome birder named Maria Allen, who has mapped all of the ranges for South American birds!

Poo, Maria, and I immediately started birding and we found this mystery raptor: our best guesses are dark-morph Swainson's Hawk, Turkey Vulture, or Golden Eagle. Leave a comment if you have an ID! 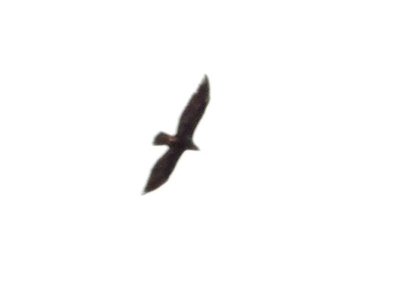 We drove south, down and out of the Wood River Valley on Gannett Road and found many avian delights including an abundance of raptors. This is a beautiful immature male NORTHERN HARRIER that posed oh-so-cooperatively by the side of the road for his photo: 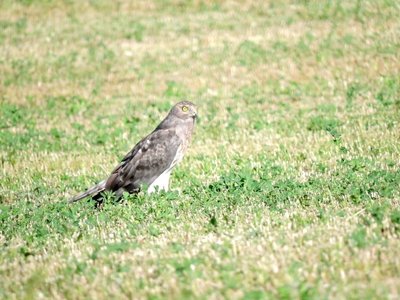 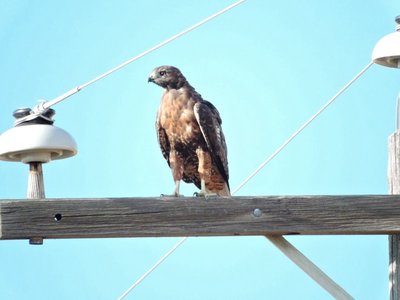 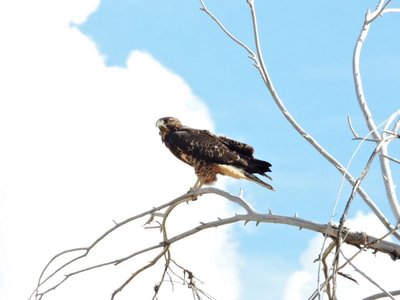 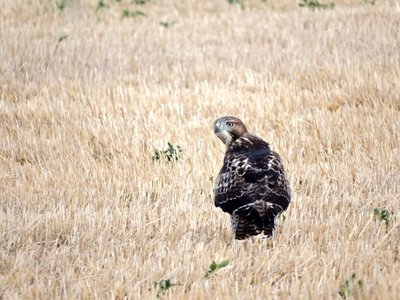 Then, Poo had her most fantastic spot of the day - she spied this rare BARN OWL, mind you, while driving, that was perched in a shrub at least two hundred feet away from the road! This was a completely unexpected find as Poo says she has only ever seen one in the Wood River Valley vicinity before. This was my second life bird and the rarest find for the day! 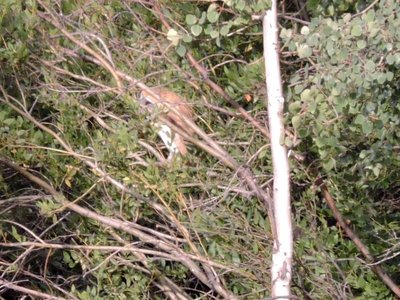 As we were approaching Silver Creek Preserve, we found this herd of elk: 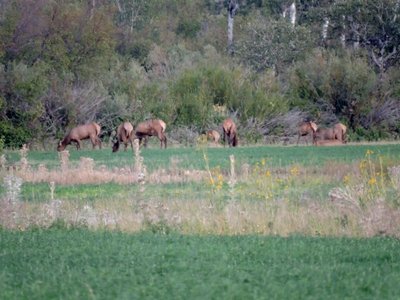 Then, we found my third life bird for the day - this uncommon migrant GRAY FLYCATCHER which was characteristically bobbing its tail down (rather than up like other flycatcher species), confirming its identification: 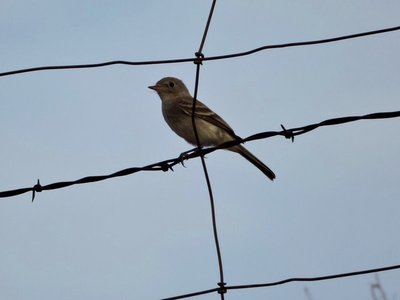 Next, we found this Bull Moose that was surrounded by willows: 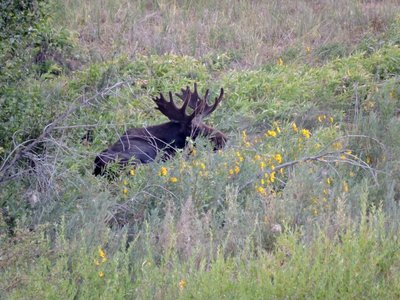 And even a cow moose with a Mule Deer right behind it! 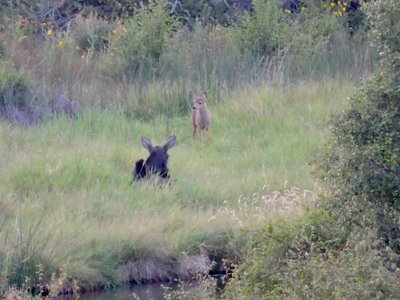 It took us 24 hours of studying my photos of this bird to confirm its identification with the help of Idaho birder Jay Carlisle as being a confusing juvenile YELLOW-RUMPED WARBLER. Thanks, Jay! 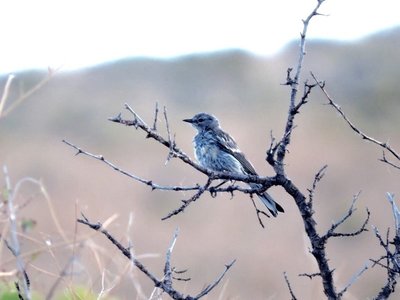 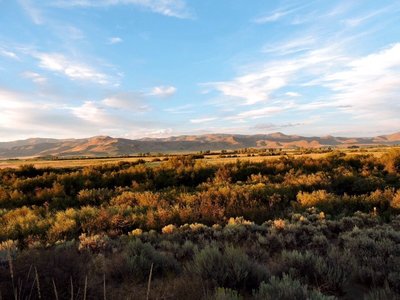 We looked for the Long-eared Owls at Silver Creek and failed to find them; however, Poo did show me the nest they used this year: 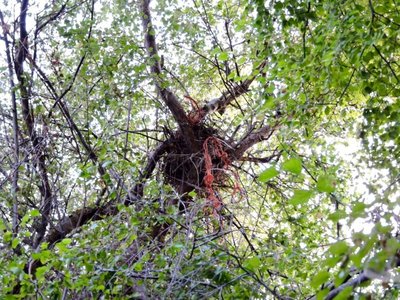 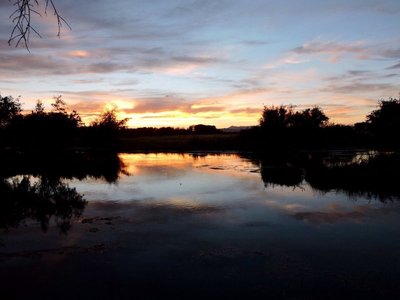 We spent the early evening until about 10:45pm owling on roads near the town of Picabo. We found two unphotographed GREAT HORNED OWLS fairly quickly, our second owl species for the day.

We also found this COMMON POORWILL (life bird #4!), a species of nightjar that was sitting on the road in front of us, occassionaly sallying into the air to "hawk" insects, and would then return to its spot on the road. I was lucky to get this individual as my life bird for this species because Poo and Maria informed me that this is typically a species that does not allow for great looks. Here is an okay picture I managed of it sitting on the road in the car's headlights: 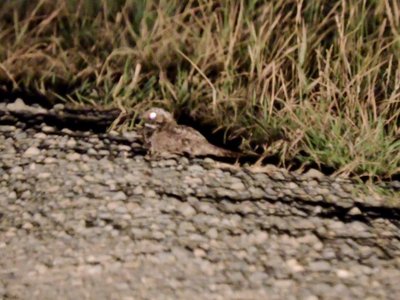 Then, we drove and drove slowly along this one road looking for a possible life bird for me: the Short-eared Owl, a medium-sized owl species that flies low to the ground around open grasslands and sagebrush steppe during evenings and early nighttime hours. After at least an hour of not seeing this bird, Poo said, "I bet one will fly right in front of the car."

Sure enough, ONE SECOND LATER, the pale, bat-like flight of a hunting SHORT-EARED OWL zoomed directly in front of the car and then disappeared into the darkness. Poo, Maria, and I broke into laughter at this unbelievable situation on which I was presented my 5th life bird and 3rd owl species for the day - completing an "owl trifecta!"

It was a fantastic outing and Poo and Maria agreed with me that it was one of the best, most productive, and most memorable evening birding trips on which any of us had ever been!

Here are the three owl species we had:
1. Barn
2. Great Horned
3. Short-eared

Bird-of-the-day goes to my life-bird SHORT-EARED OWL that, as if one cue, flew right by the car after Poo said she thought one would! Runners-up go to the BARN OWL which was an extremely pleasant anomaly as well as the unexpectedly photogenic COMMON POORWILL. A fantastic day!

Thanks SO much to Poo Wright-Pulliam for driving Maria and I to all of these wonderful birds. It was also great to meet you, Maria!

Stay tuned - yesterday (the next post tonight), Poo, Maria, and I joined Kathleen Cameron for nearly an all-day birding adventure in which the primary goal of the day was to find my nemesis bird: the Great Gray Owl!

Posted by skwclar 20:09 Archived in USA

Wonderful adventures! And Great owl sightings! Your trip has so many highlights thus far.

Hi Henry, can't believe that the Short Eared Owl flew right past your one second after you said it would! I don't think your bird is a turkey vulture due to the shape of the wings. I am not sure enough to count it, but I'd guess your raptor is a Swainsons Hawk.