On Friday, the Emerald Princess cruise ship made its second and final port of call on Eleuthera Island, the Bahamas. My sister was under the weather, so she stayed aboard the ship with my mom; however, my dad and I took a beautiful hike on the island.

We hiked the three-mile trek to Lighthouse Beach on the tip of Eleuthera Island for two main reasons: one was that Lighthouse Beach is regarded as possibly the most beautiful beach on the island, and the second is that it passes through a known wintering territory of the Kirtland's Warbler, which is arguably the rarest warbler in the world with only about 3,600 individuals in the wild.

The trail passed by many salt ponds (which would be called "salinas" if we were still on Grand Turk. The first one held this BLACK-BELLIED PLOVER (in nonbreeding plumage, so no black belly): 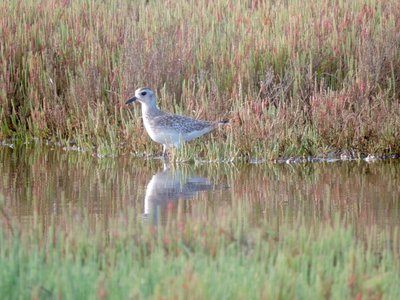 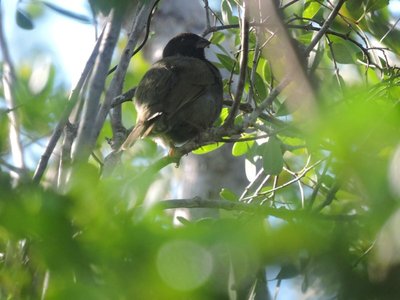 Here is the female: 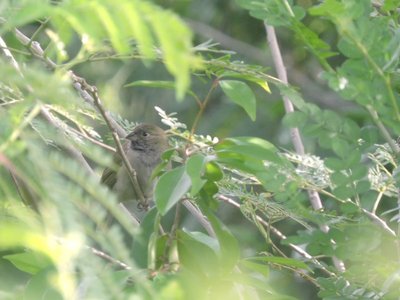 In order to have a greater chance in finding the Kirtland's Warbler, I used the playback method. This method is discouraged by many birders and conservationists due to cases where it can stress the bird. I; however, set rules for myself and used playback ethically. Since this is not the breeding season, using playback would not be detrimental to a bird's reproductive success. Also, I did not overuse this technique as I broadcast this species' recorded song eight times in a row at locations spaced approximately 100 meters or greater apart from each other. Also, if the bird did appear - I set the rule for myself that I would not play the song anymore. I was determined to find this bird!

Then, I came upon a TRICOLORED HERON (right) and what I thought to be a Cattle Egret (left): 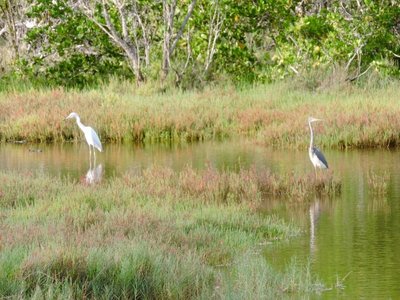 My eyes popped out of my head; however, when I inspected the bill pattern of this bird - which I initially thought to be a common Cattle Egret. It turned out; however, to be my life bird REDDISH EGRET, an uncommon species! This bird comes in two forms, the reddish phase which cannot be confused with another species, as well as this white phase which can be distinguished from other egrets by its elegant pink bill with a black tip. This was a lifer for me! 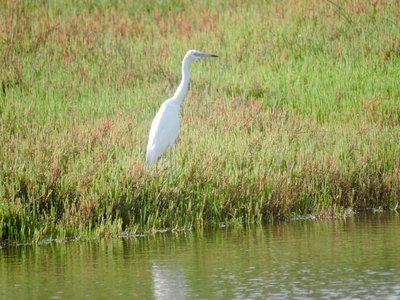 Here is a close-up on the TRICOLORED HERON it was with: 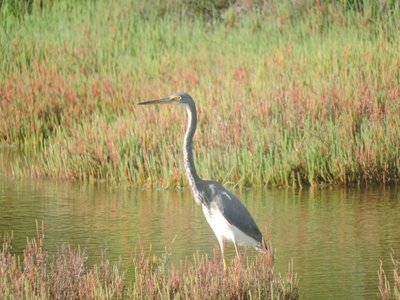 Another heron species was in the vicinity - a GREEN HERON: 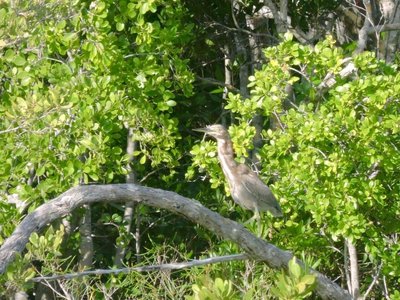 Then, I spotted my life bird COMMON GROUND-DOVE foraging on the trail ahead of me. This was the bird I missed as a vagrant at the Lincoln Park Zoo in Chicago a bit over a month ago. 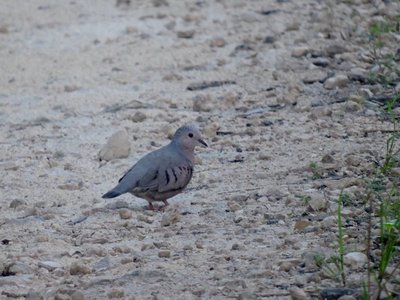 THICK-BILLED VIREOS, yet another life bird for me, were omnipresent along the trail with their scratchy, unique songs: 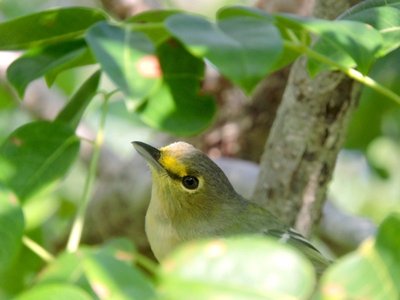 Another omnipresent sound during the hike was the scratchy pitter-patter of crabs scurrying away from the trail. They were everywhere! 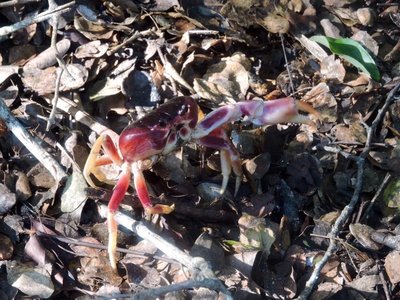 As I put my iPad away after broadcasting the Kirtland's Warbler's song at what must have been the tenth location, I noticed a small passerine (songbird) fly into a nearby shrub. A second later, as I registered its defining characteristics, I immediately knew it was my life bird KIRTLAND'S WARBLER!!!!! This is the rarest warbler in the world and my 3rd favorite bird of 2015, so you could not even imagine my excitement!!!!! 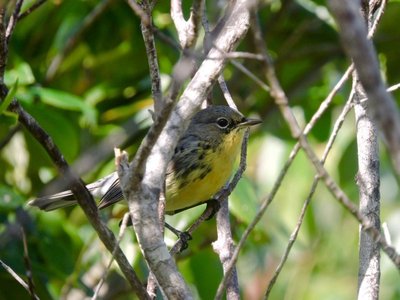 This was a monumental find because this bird is rarely ever found on its wintering grounds - which includes isolated areas on only a few Bahamian Islands. To give you prospective on how rare it is, this bird only breeds in about 14 counties in Michigan and 1 in Wisconsin. At the beginning of this trip, I gave myself a 3 in 10 chance in finding this bird so I was absolutely elated to see it!!!

Here is a BANANAQUIT, a classic Caribbean species that I was finally able to photograph:

LESSER YELLOWLEGS at one of the ponds along the trail: 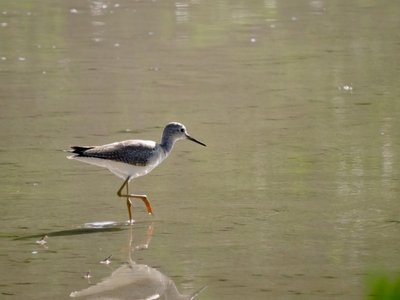 Here is the pond that was on the opposite side of the trail from the yellowlegs: 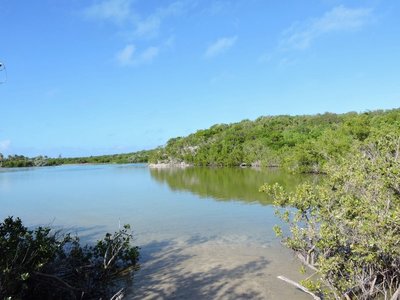 We finally made it to Lighthouse Beach after a long and sweaty, but bird-filled, trek there. It was well worth the effort: 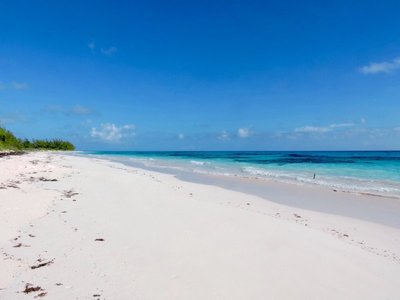 The water was as beautiful and clear for swimming as it looks, and even though it was a bit choppy that made it even more fun and I still saw a few fish. While we were there, an OSPREY and an unidentified pelagic species flew by.

The hike on the way back was quieter bird-wise because it was the middle of the day, when birds typically fall quieter to conserve energy in the heat of the day. The scenery was absolutely beautiful, though: 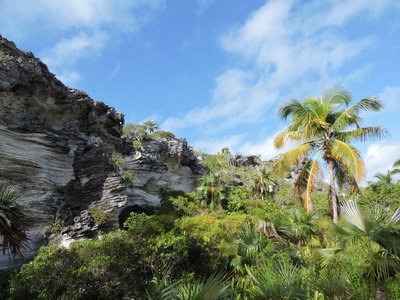 This was a mystery bird for me while on the trail, but I identified it after the fact as my life bird PAINTED BUNTING, a female. Too bad I didn't see the male because his plumage contains all the colors of the rainbow! 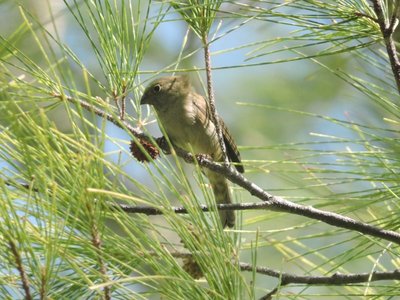 View of Lighthouse Bay on the way back: 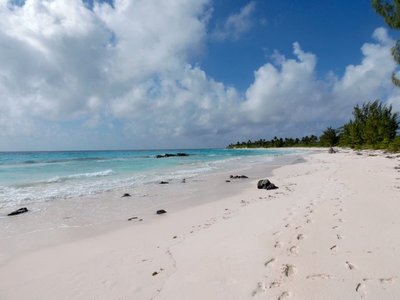 There was a sign along the trail describing the avifauna one can see on the way, which included the Kirtland's Warbler. Yep, found him! 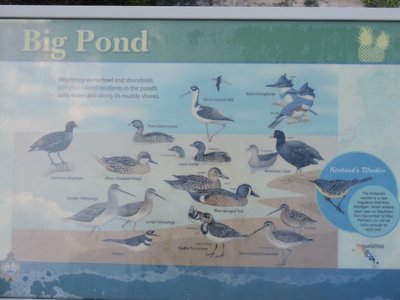 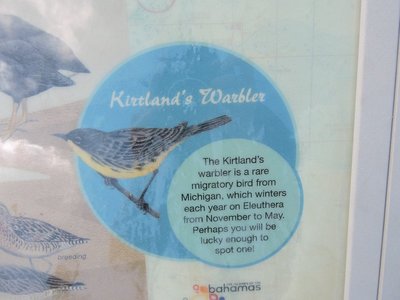 On the way back, I took a picture of the location where we found the Kirtland's. This photo represents typical habitat one could reasonably expect to find them in during the winter: 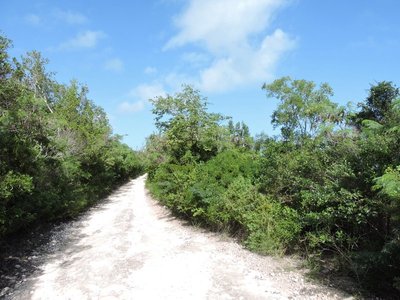 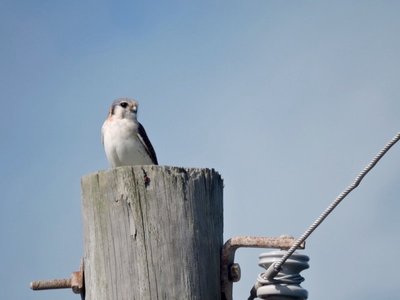 My second favorite bird of the day was this GREATER ANTILLEAN BULLFINCH, a lifer for me and an uncommon species that has a patchy range limited to the Caribbean. It was another target bird of mine for this trip. 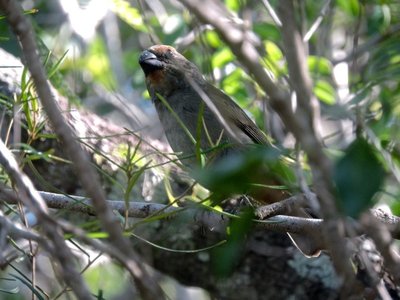 Our ship, the Emerald Princess, stayed offshore during this port of call and passengers traveled to and from her and the island via tenders (the ship's life boats). Here is the view of our ship from shore: 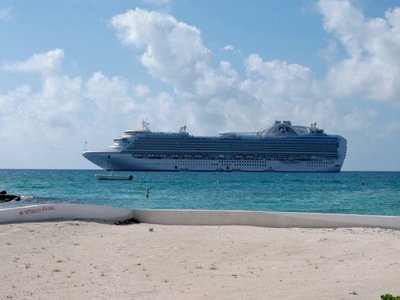 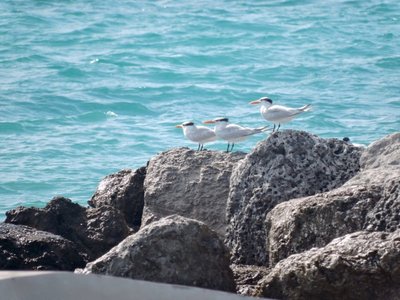 RUDDY TURNSTONE, the last bird I saw on the island of Eleuthera: 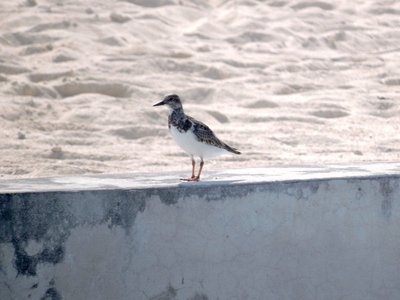 Finally, here are some scenery photos from the evening. This is the last view of the island of Eleuthera. Bye bye Kirtland's Warbler! 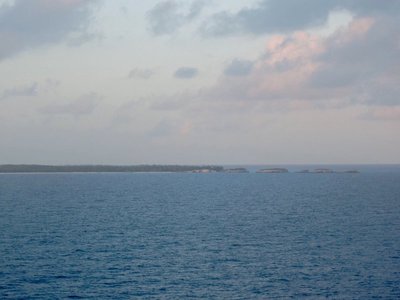 Late afternoon/evening scenery from the ship: 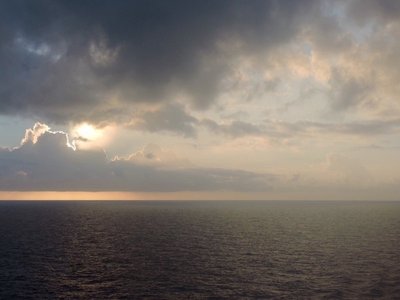 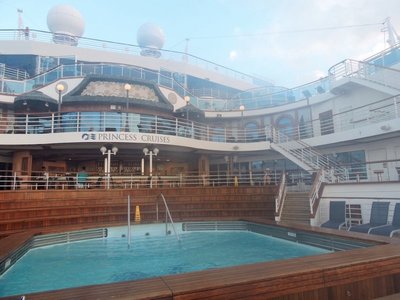 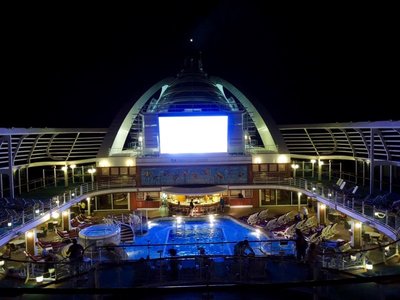 The evening was rather bittersweet as even though we knew it was our last night on the cruise, we still had a fun, relaxing time and savored the experience. It was an awesome final day on the Emerald Princess! Bird-of-the-day, of course, goes to the KIRTLAND'S WARBLER which was my #1 target bird for the entire trip, and runners-up go to the beautiful white-phase REDDISH EGRET as well as the very uncommon GREATER ANTILLEAN BULLFINCH, which were other targets for the trip. The full species list is below.

Posted by skwclar 12:37 Archived in Bahamas