Today I birded with my Uncle Mory at the Allegan State Game Area in southwest Michigan in search of a few target warblers. We were hoping to find Cerulean, Prothonotary, Hooded, and Blue-winged Warblers, with our main goal being a prospective life bird for both of us - the Worm-eating Warbler.

We found this INDIGO BUNTING near the beginning of the trail where we would search for the warblers. 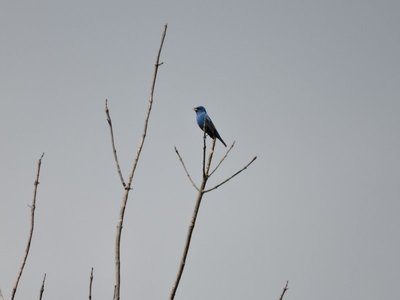 We ended up seeing or hearing all of our target warbler species except for the Prothonotary; however, they were all extremely, let me repeat - extremely, uncooperative and allowed for fleeting glimpses at the most.

The only photo I obtained of the main target bird of the day, the Worm-eating Warbler, was this terrible one. And the only reason why I got this photo is because I had to creep around through the dense thorns and briars, on a 45-degree angle wooded hillside, for twenty minutes. In the process, I got a few scratches, picked up a tick (what a nasty creature!), obtained this miserable photo of the bird, and became very frustrated and hot! 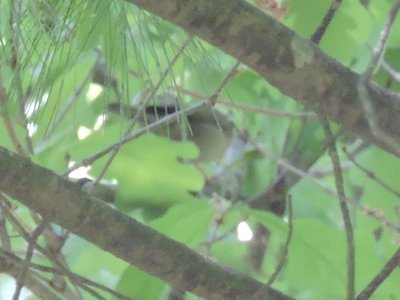 It was actually productive, yet frustrating, birding. I identified many birds by ear, including goodies such as BLUE-WINGED WARBLER, OLIVE-SIDED FLYCATCHER, and even YELLOW-BILLED CUCKOO, yet I failed to see any of these - and this was the case for many more birds today, as well.

Later in the evening because my uncle and I were in Grand Rapids for a wedding reception, we searched for a pair of PEREGRINE FALCONS that are nesting downtown. At one point, one falcon flew over us; however, it soon flew out of sight and we were never able to obtain any photographs.

Bird-of-the-day goes to the Indigo Bunting, with no awards to the annoying warblers. Runner-up to the Peregrine Falcon. The full list can be found below. It was a good day of birding, but the birds were just not very cooperative!

Thanks to my Uncle Mory for driving and birding with me today!