Today our family went on a marvelous bus tour with a fabulous guide named Berry.

At 7 in the morning, we were picked up at the front of our motel's driveway by our wonderful tour guide, Berry. Then, we drove for nearly four hours with Berry talking passionately over the loudspeaker. After a brief stop for an early lunch, we kept heading north, approaching the most northerly areas of New Zealand. Birds seen along the way included MARSH HARRIER, SPUR-WINGED PLOVER, PURPLE SWAMPHEN, TUI, NEW ZEALAND PIGEON, and much more. Then, as we were driving over the high cliffs, we started seeing both the Tasman Sea on one side and the Pacific Ocean on the other. Berry, who can speak fluent Maori, started singing a beautiful Maori song about northern New Zealand, and it was beautiful listening to him sing and seeing two amazing bodies of water--the Tasman Sea and the Pacific Ocean--meet (with a gorgeous backdrop of precipitous cliffs). Then, our family walked to the most northerly accessible point on New Zealand's north Island. "Stunning" can't even describe the views, and no photos can do this magnificent place any credit.

Here is a photo of a BLACK-WINGED PETREL I saw chasing gulls around the point. It was very surprising to see this seabird from land, because seabirds like this typically can only be viewed by boat (like on the pelagic trip I went on a few days ago). 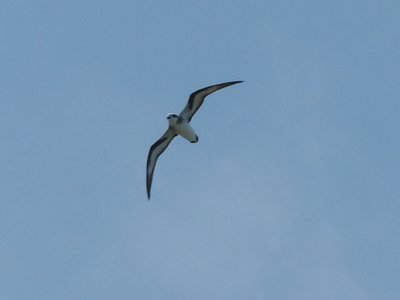 After that, Berry took us sledding down sand dunes, which was extremely fun, and then he drove the bus for 50 miles on a beach! It is called the Ninety Mile Beach, and it is a very long beach that has been allowed to become a highway. It was awesome to drive on a beach! A few birds were seen there, including WHITE-FRONTED and CASPIAN TERNS, BLACK-BILLED, RED-BILLED, SILVER, and KELP GULLS, as well as a few BLACK OYSTERCATCHERS. Here are the photos:

WHITE-FRONTED TERNS and a SILVER GULL: 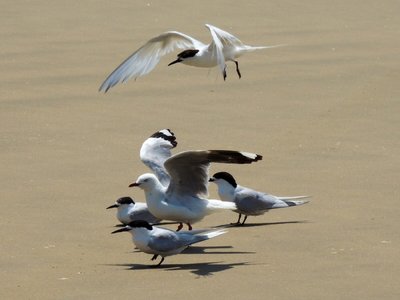 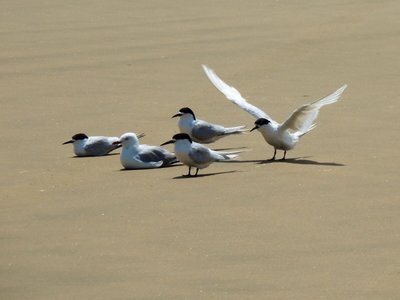 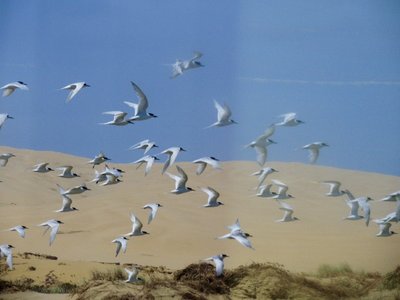 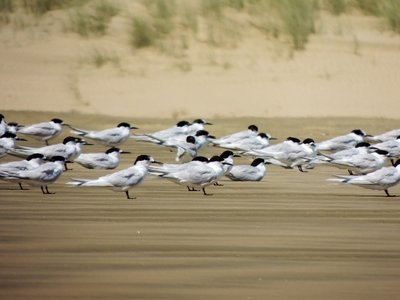 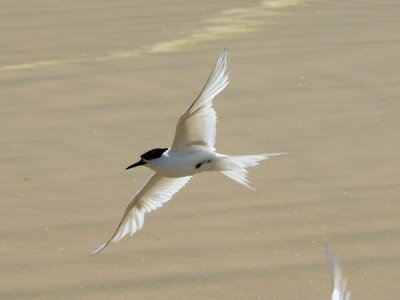 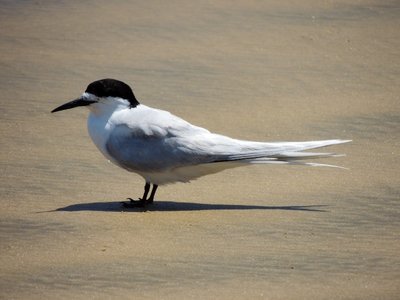 It was an extremely fun bus tour, and our guide, Berry, was very kind to us. HE EVEN GAVE AS AN EXACT LOCATION TO SEE THE ENDANGERED KIWI BIRD RELATIVELY CLOSE TO OUR MOTEL....so, stay tuned, because tomorrow, hopefully I will have the North Island Brown Kiwi on my life list!

How wonderful that Berry sang for you! I often miss music when I am on vacation. Places often do not have any music. Will you be studying any aspects of music while you are traveling?
Aunt Mary