Before the term above becomes too much of a personal cliché, I am using it again on this blog post, except this time I was not looking for a quetzal, but a kiwi! WAIT A SECOND, I am getting much too ahead of myself already! Let me go from the beginning of the day and lead up to the evening events.

The morning was devoted to relaxation and homeschooling in our motel room, and then after lunch our family decided to go kayaking. After we got our kayaks, we rowed out into the bay and towards a nearby secluded island. It was beautiful! We kayaked in narrow water passages through rock formations connecting to the island, we stopped in some beautiful coves and admired the scenery, and I even swam a bit! Once we got about half way around the island, we found a good-sized beach and landed our kayaks there. I soon found to my initial annoyance that half the beach was roped off! Soon after that, I discovered why it was roped off--an endangered NEW ZEALAND DOTTEREL and its chick were strutting about nervously in the roped-off section. That is amazing because there are only 1400 birds of that species left in the wild, and they are a New Zealand endemic (not found anywhere else in the world), so it was great to see the parent with its chick! I didn't manage to get a photo of the baby, although I was lucky to get this good of quality of a photo (see below) because I only had my sister's little pocket camera of which I had to take the photo. It was extremely nice of the dotterel to come running towards me and posing just five feet away from me, allowing for excellent photographs despite not my favorite choice of camera. It was probably trying to lead me away from the nesting area. Here's the picture: 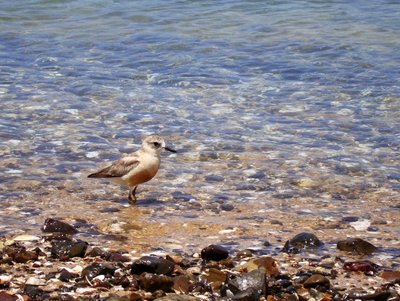 I also photographed a family of VARIABLE OYSTERCATCHERS on the same beach with the same camera: 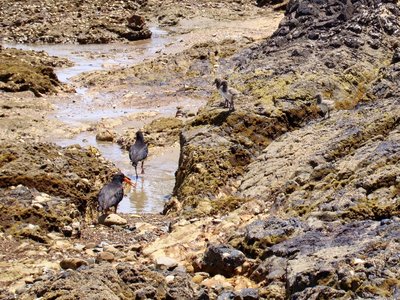 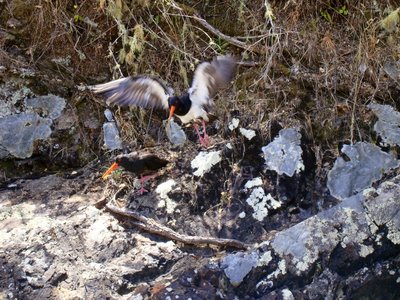 Other birds seen near the island were nesting KELP GULLS and WESTERN REEF-HERONS and fly-over PIED CORMORANTS and AUSTRALASIAN GANNETS, as well as SILVER, RED-BILLED, and BLACK-BILLED GULLS and PARADISE SHELDUCKS. 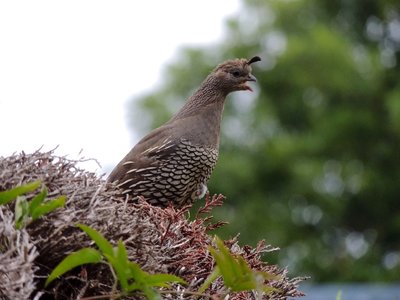 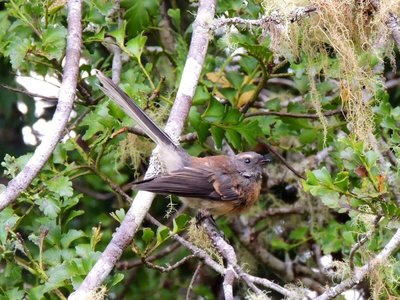 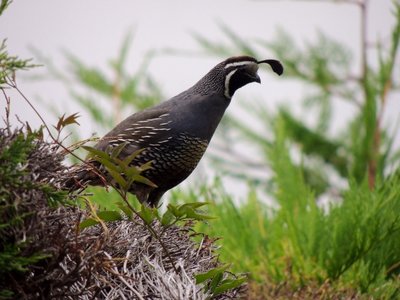 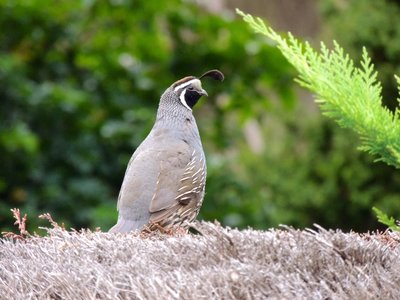 At dusk, our family headed up into the jungle to have a quest for the elusive Brown Kiwi. We passed by signs on the road that are exactly like deer-crossing signs in the USA, except instead of them being a deer-crossing sign, there are kiwi-crossing signs! We arrived at the kiwi spot and my mom and Pearl stayed in the car while I headed into the jungle to look for the kiwi. I stayed in there for an hour an ten minutes, battling Mosquitos, straining my ears over the dawn choruses of Tui and Moreporks, battling Mosquitos some more, hunkering down in the dark and spooky forest, and, did I mention battling Mosquitos? And guess what was my reward?! Only one single BROWN KIWI song the entire night, not to mention that it had to be over five kilometers away. Did I enjoy hearing it sing? Not really, because I was battling Mosquitos at that time, getting stuck in thorny vines, and battling Mosquitos some more! So, I guess I can include the BROWN KIWI on my life list, but it was a bummer not to see one and to not even have them singing in a closer range or more frequently.

So, now here are the bird awards for the day:

Brown Kiwi, since you were so disrespectful to have me wait in the buggy, boggy jungle for over a hour just to have me hear you sing once, you only get runner-up for today. Bird-of-the-day goes to the equally rare, more obliging, and quite frankly more beautiful New Zealand Dotterel seen on the island offshore.

So (I try not to start my sentences with so), so (there I go again, you can tell I'm tired now!), I will hopefully get another chance to see a kiwi some other place in New Zealand, because tomorrow, my last day in Paihia and the Bay of Islands area, is forecast to be rainy and windy all day.

Good idea not to bring your camera kayaking! You managed to get a very nice picture of the Dotterel with Pearl's pocket camera. Mosquito spray should be next on the agenda! Love, AM