Owl Around the Bog!

Today, I birded the Sax-Zim Bog of northern Minnesota in search of owls, Sharp-tailed Grouse, and Bohemian Waxwing. We were on the road by half past seven and were treated to an absolutely stunning northwoods sunrise with deer in the foreground: 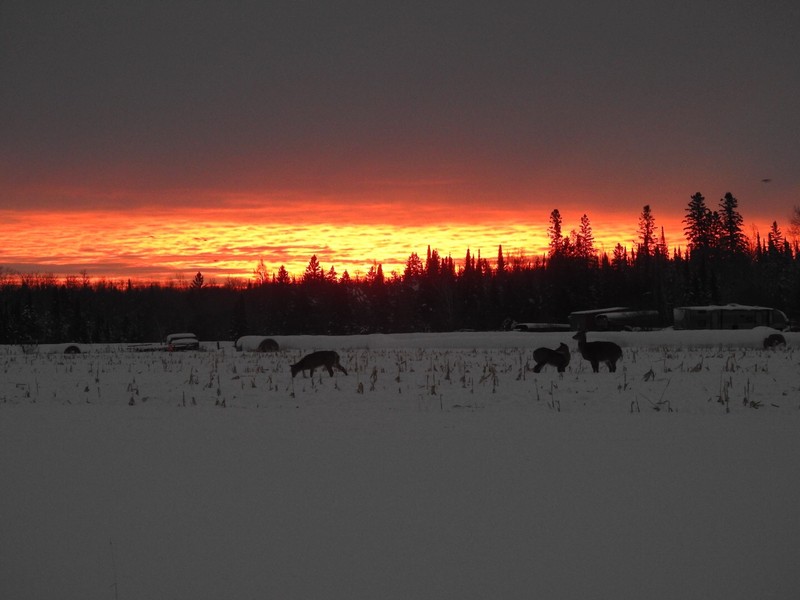 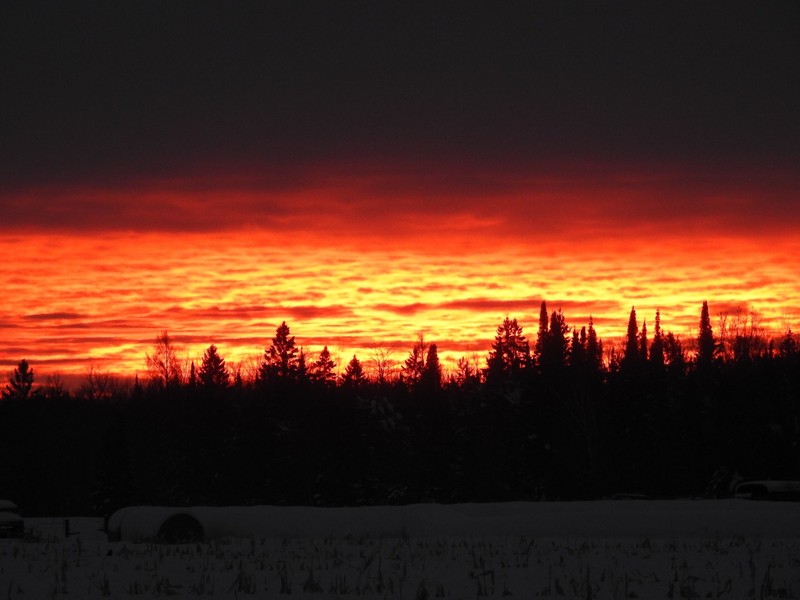 After checking Racek Road in search of Sharp-tailed Grouse which we unfortunately failed to find, we headed to Highway 7 to check for GREAT GRAY OWL. Sure enough, one mile south of the greenhouses where the owl was described to be, a huddle of cars was parked alongside the road and we were afforded some rather distant but clear views of my favorite ABA-area bird. I cherish every single moment I see this incredible species, the “Phantom of the North.” 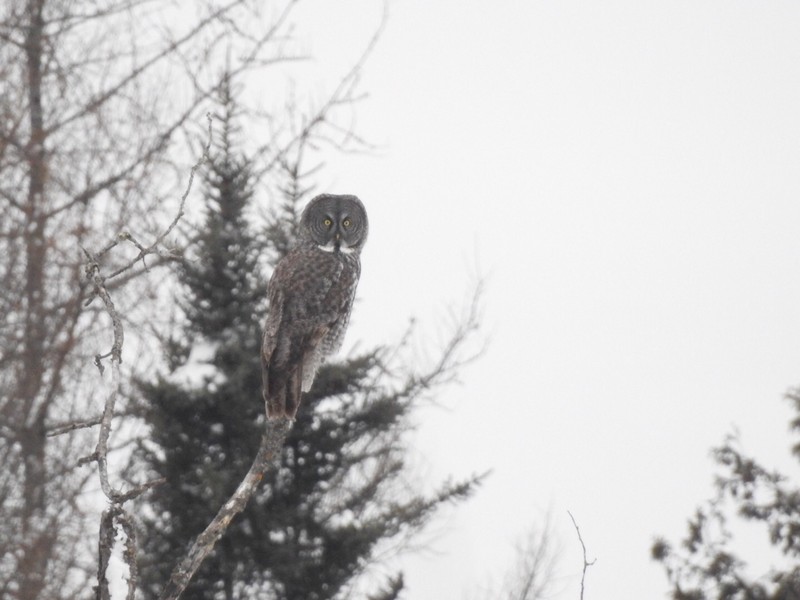 Then, a Canadian National train came roaring along the track parallel to the highway and the owl wasn’t found again. 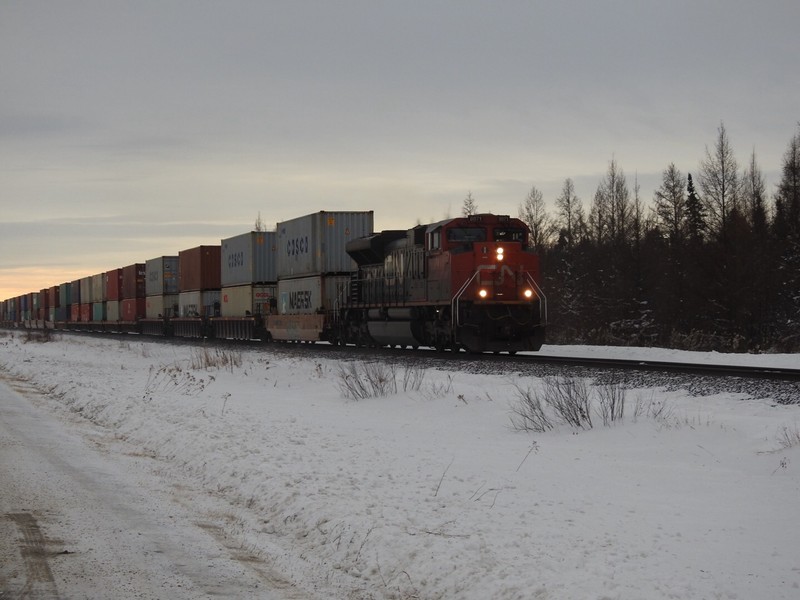 The Admiral Road feeders proved to be fruitful once again, immediately providing us with brief but plentiful views of two BOREAL CHICKADEES: 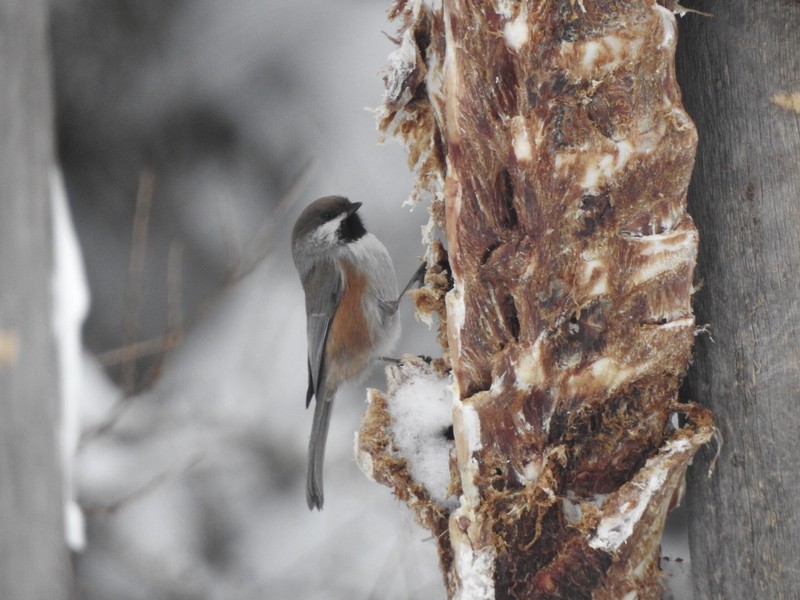 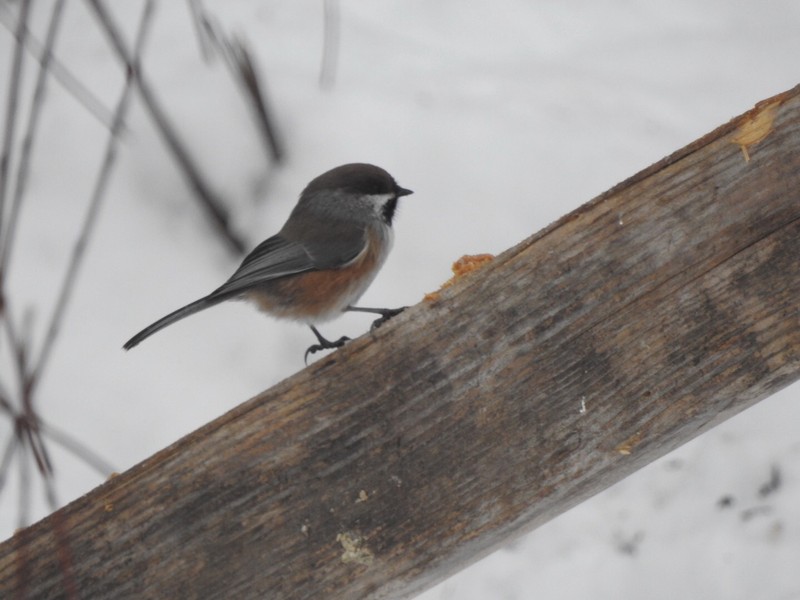 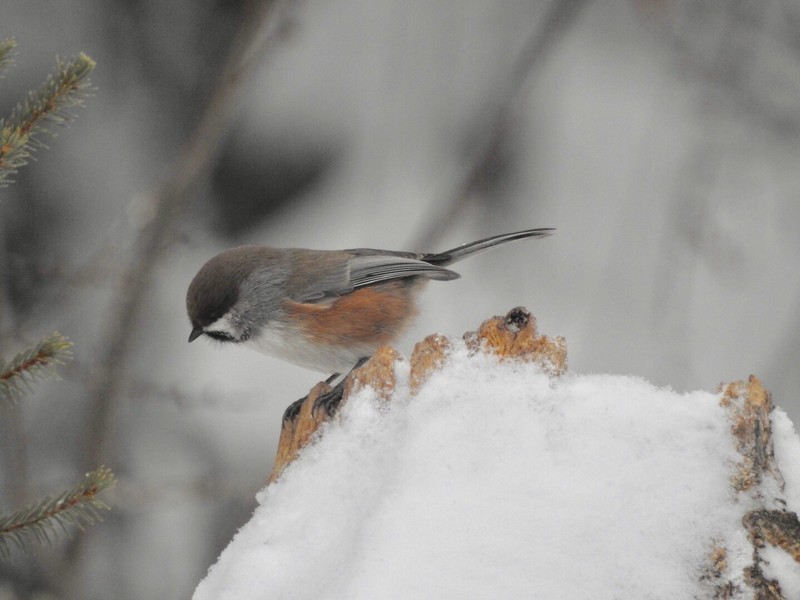 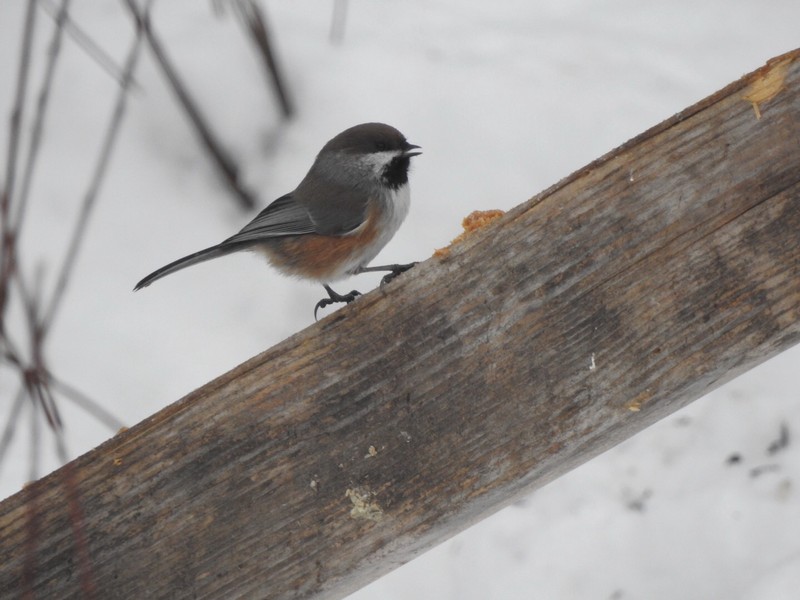 Soon, the flock of PINE GROSBEAKS flew in: 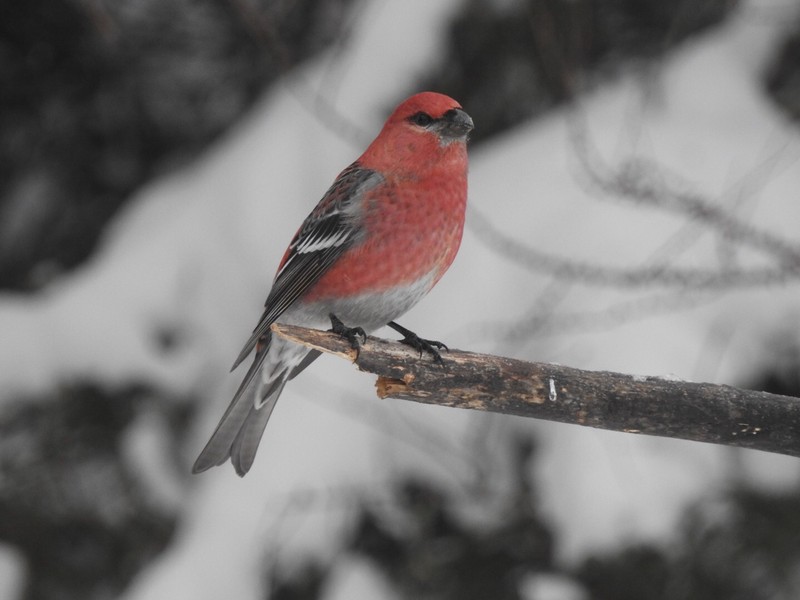 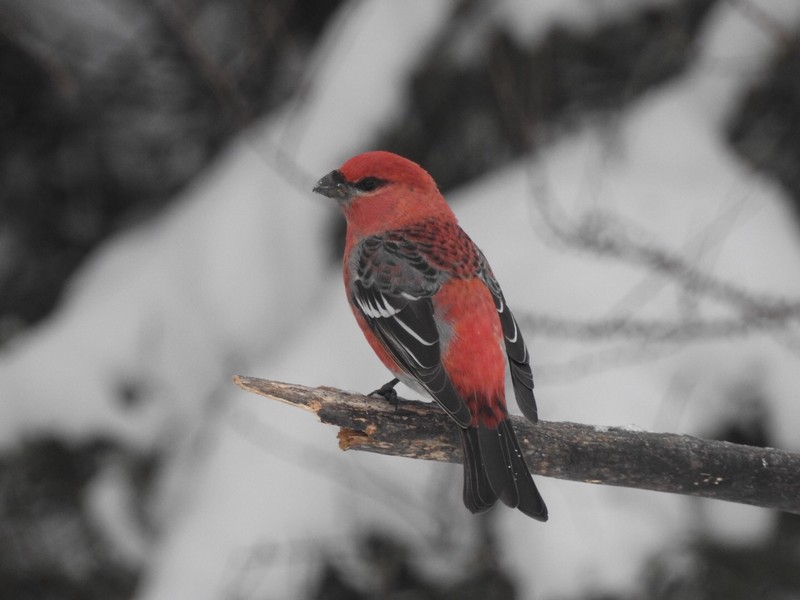 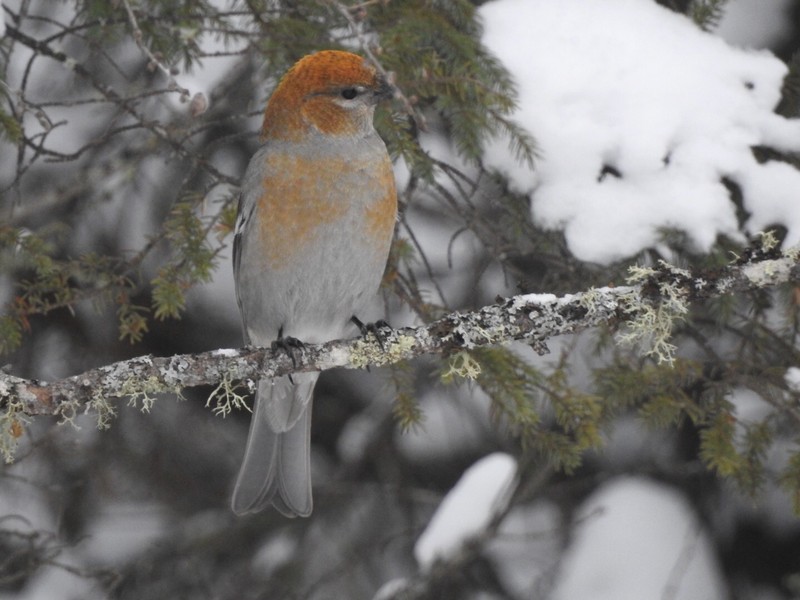 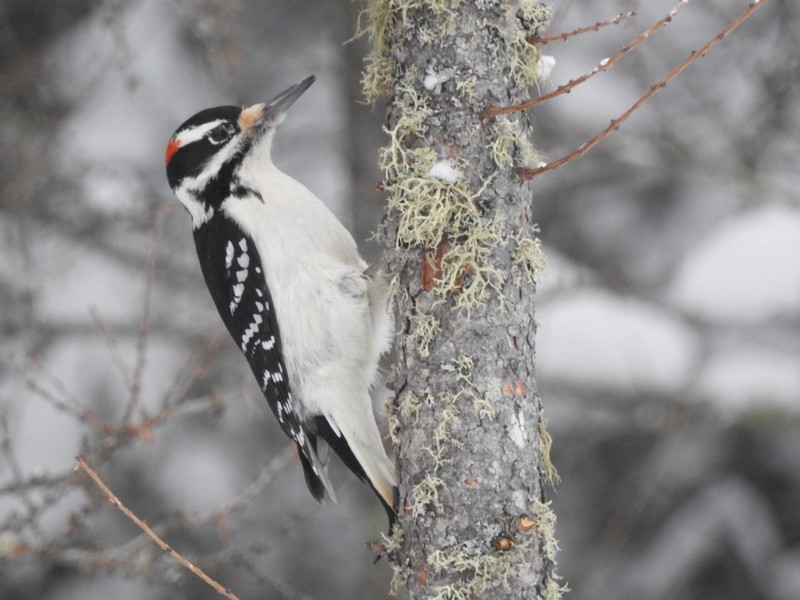 Then, it was back to criss-crossing the Bog looking for whatever we could find. This NORTHERN SHRIKE provided wonderful roadside views: 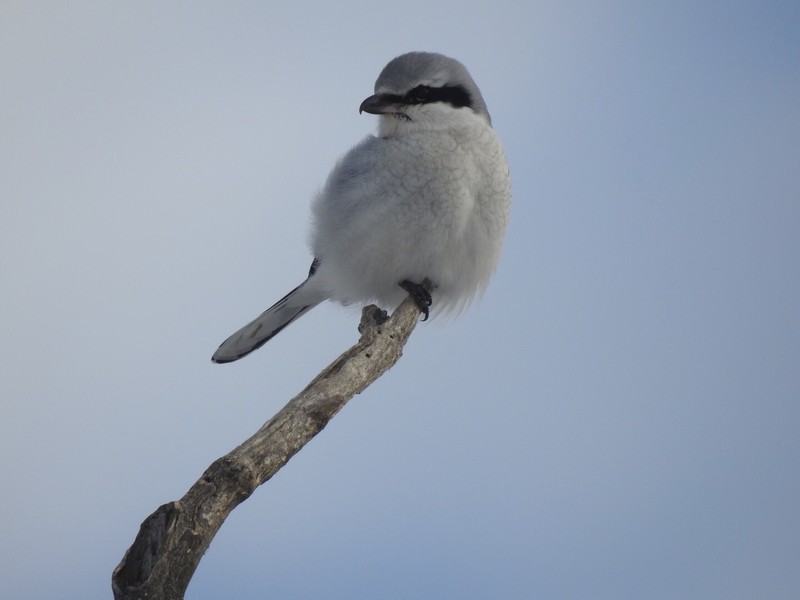 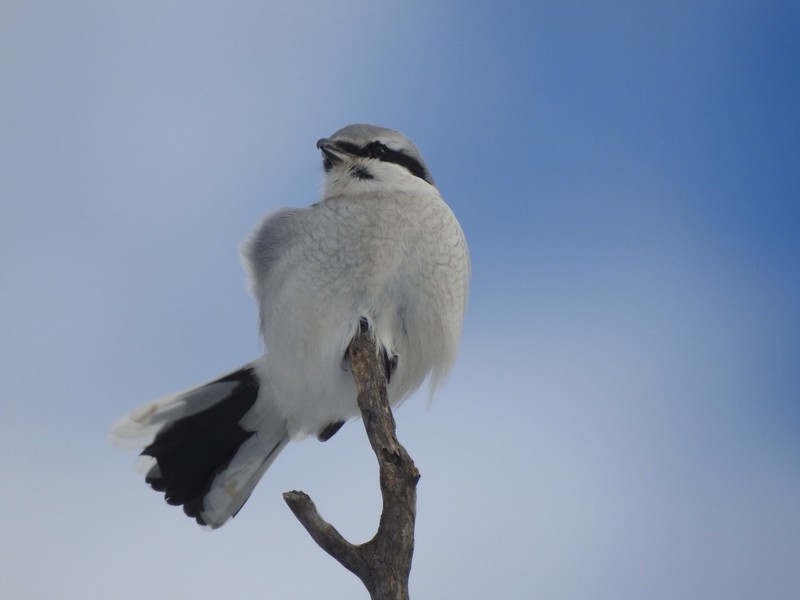 A brief look at this BLACK-BILLED MAGPIE was nice — Sax-Zim Bog hosts an isolated population which is by far the easternmost place on earth where this species is found. 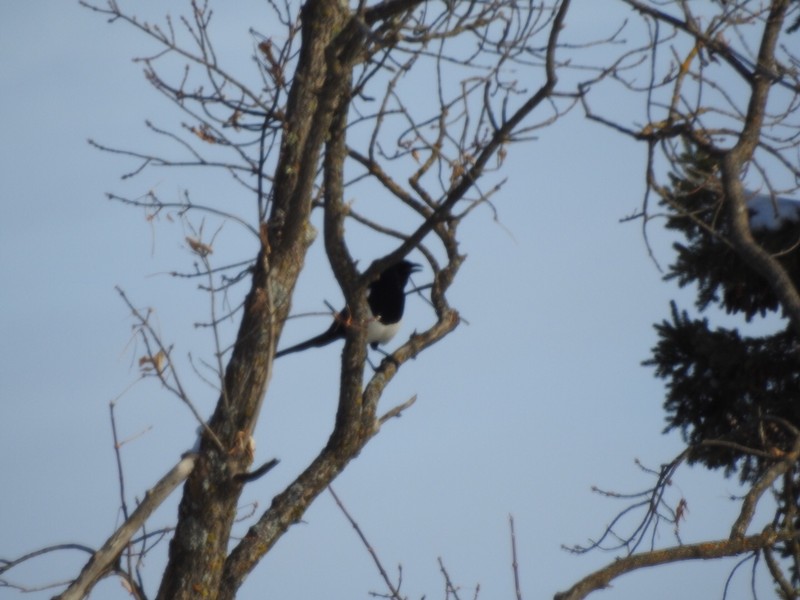 Our next stop was at a private residence where we once again missed the hoped-for Bohemian Waxwing, but at least there was a WILD TURKEY in the yard: 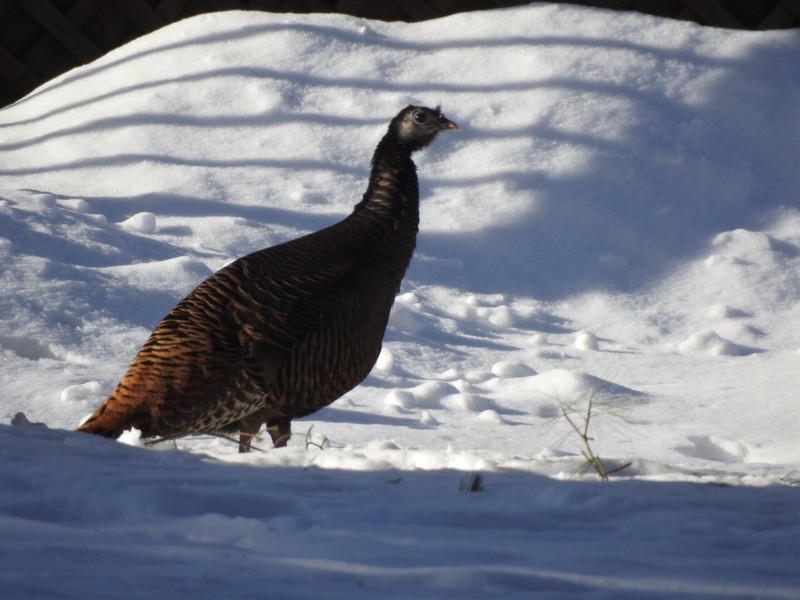 Before pulling into a place to look for the Black-backed Woodpecker, we were turning the car around and all the sudden we fell into the ditch alongside the road! This happened because there was about 18 inches of snow on the ground and it was very unclear where the ditch was, and where it wasn’t. 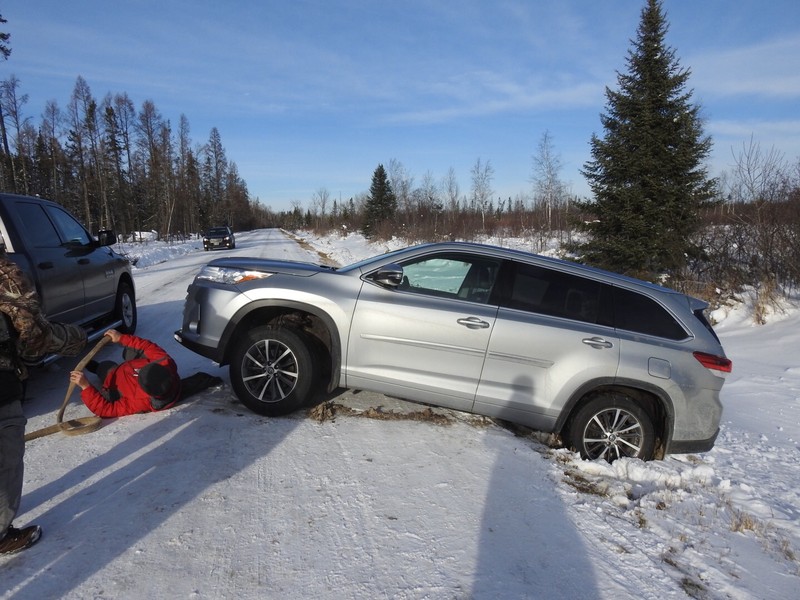 And it was only downhill from there— 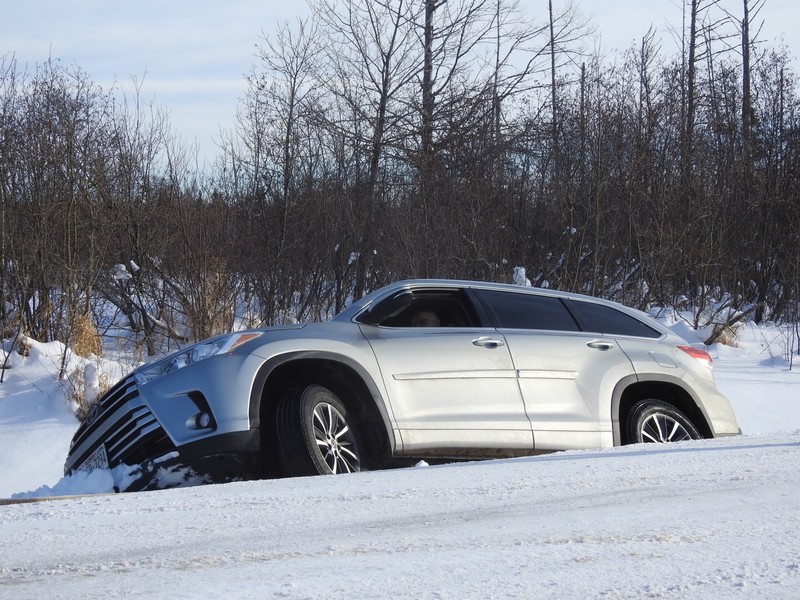 Luckily, the car was out after about an hour because three pick-up truck-loads of kind locals generously pulled us out of the ditch after quite a few failed attempts. 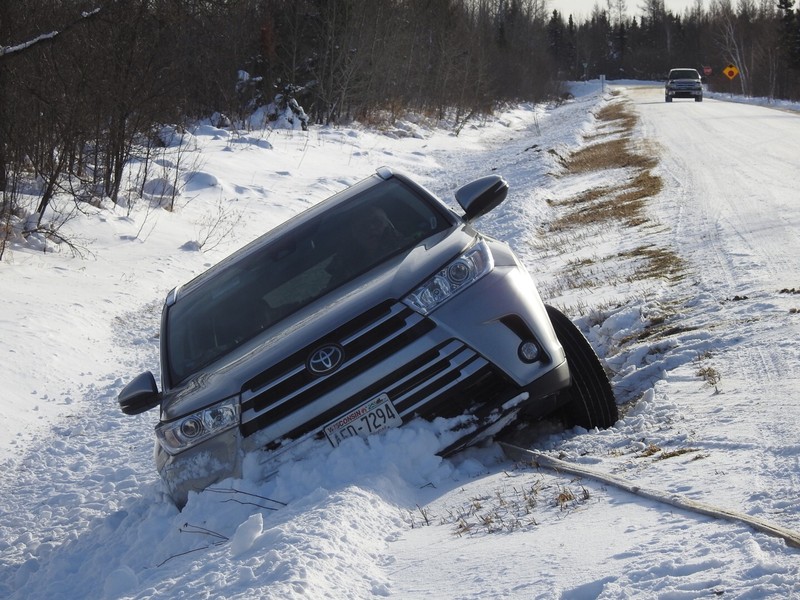 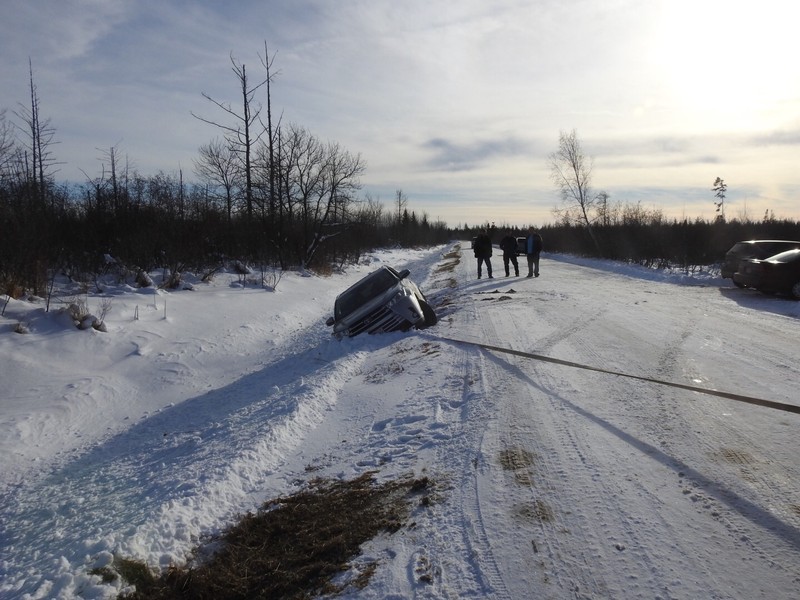 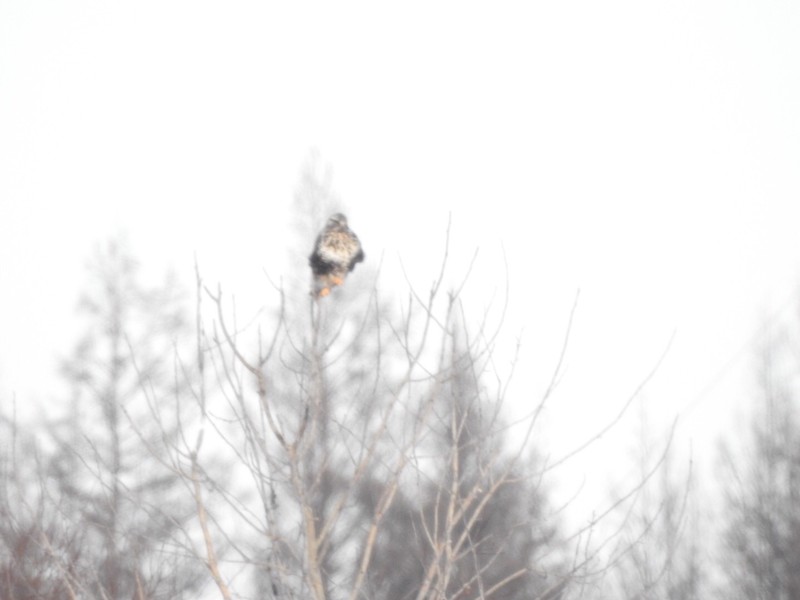 Just before we were about to call it a day and drive back to La Crosse, Bruce got a report on his phone of a Northern Hawk Owl along McDavitt Road. We pulled a (successful) U-turn and high-tailed it back to the NORTHERN HAWK OWL, which provided us with magnificent views! 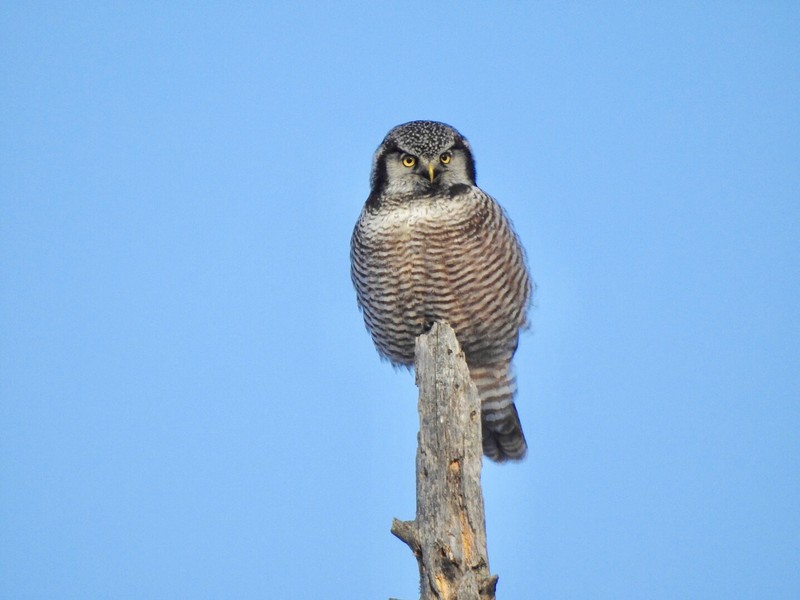 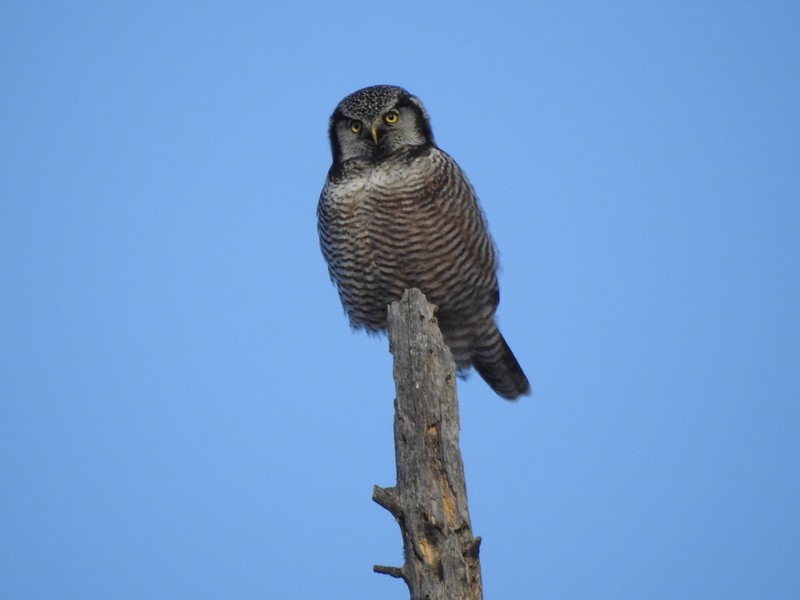 At one point, a few COMMON REDPOLLS flew over and even buzzed the owl: 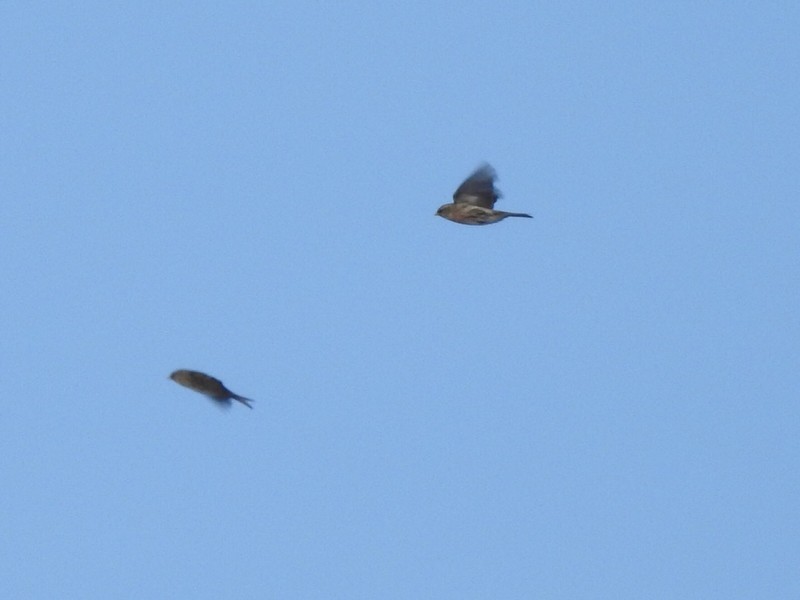 After a few minutes, the owl flew across the road and landed in another tree: 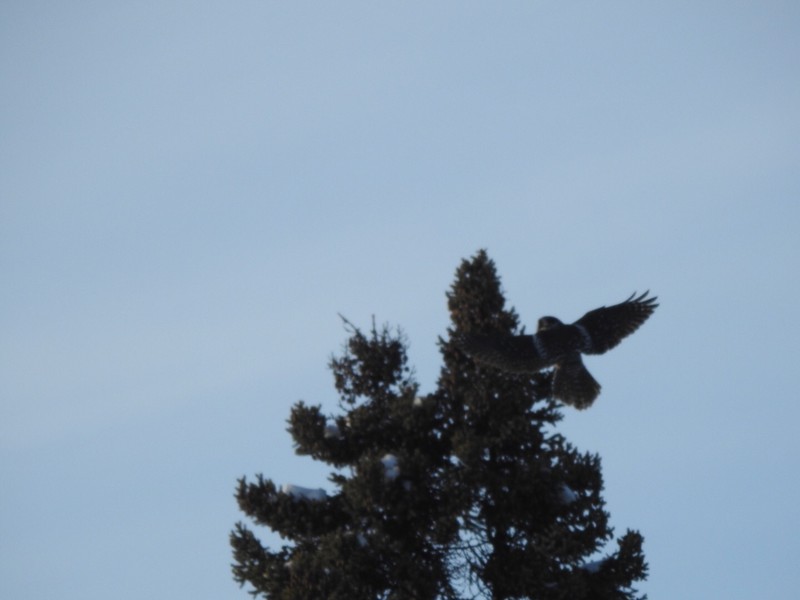 There, he provided great views once I walked around to get it in the nice evening light again: 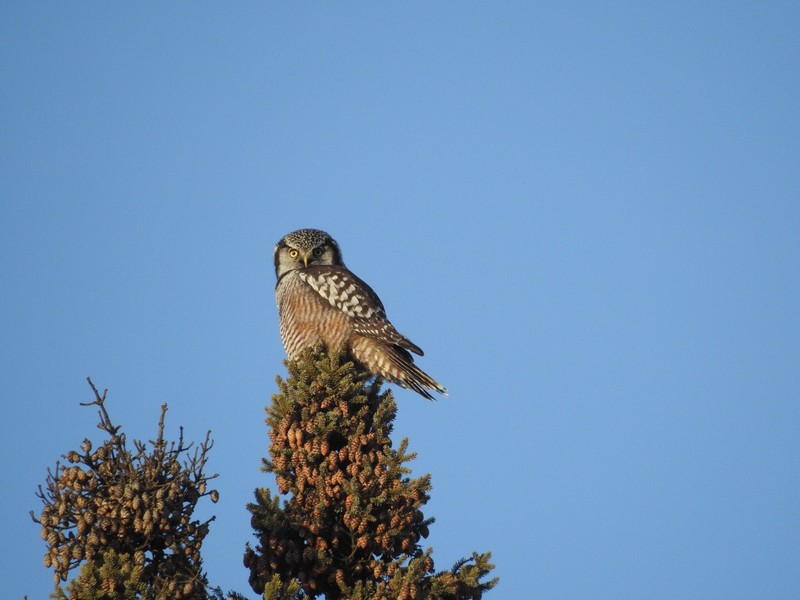 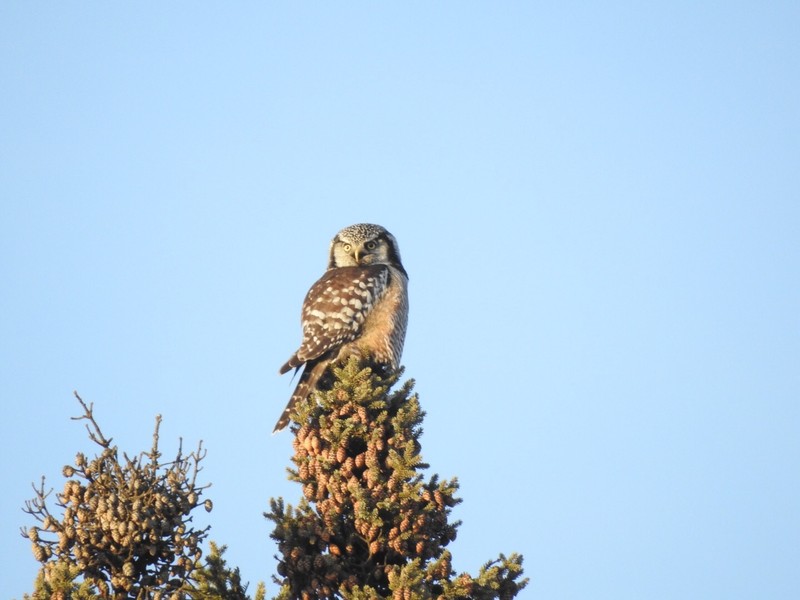 And a beautiful sunset to cap off a wonderful day. 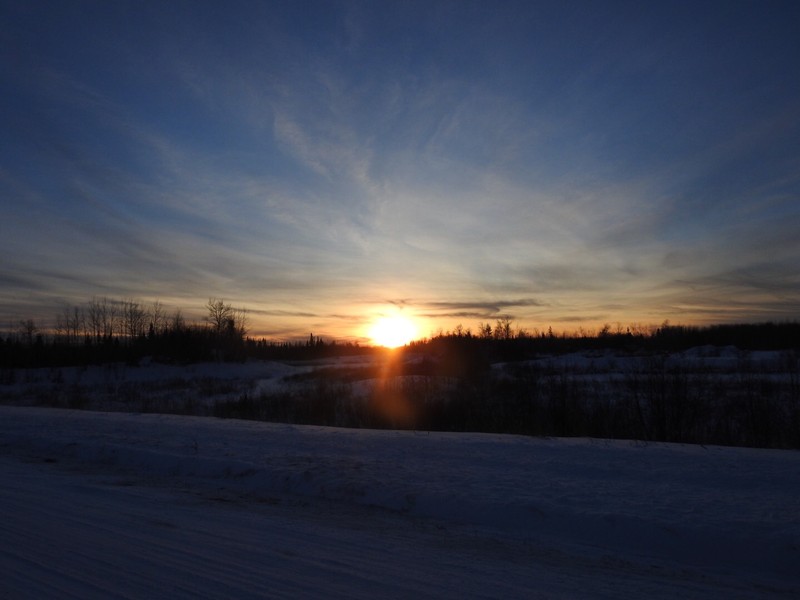 Bird-of-the-day is shared by the GREAT GRAY & NORTHERN HAWK OWLS, and runner-up to the BOREAL CHICKADEES — not bird species one sees every day!!! A very, very cool day and a successful trip, big thanks to Uncle Mory and Bruce. You guys are great.

Full species list for the trip is listed below.

Posted by skwclar 22:08 Archived in USA