Today was my only full day in Wellington, the capital of New Zealand. I spent the majority of the day schooling, touring around the city, swimming in the hotel pool, and eating.

Then, at seven o'clock, my dad and I left the hotel to start on the quest for the kiwi, part two. We walked to the bus stop and saw that the bus was about to pull away, so I sprinted faster than I have ever ran before and we managed to catch the bus. With help from a friendly guy sitting next to us, we got off at the stop for Zealandia Wildlife Preserve. Then, we took a quick walk in a nearby jungle and waited at the entrance of the preserve for the tour to begin.

Zealandia Wildlife Preserve is a sanctuary dedicated to restoring over two-hundred acres of native bush to its former state before the arrival of man to ane Zealand. They have done intensive restoration projects, including setting up a pest-free fence surrounding the protected area, trapping all nonnative pests that are detrimental to the ecosystem (cats, stoats, rats, etc.), and clearing out all invasive plants and bush. Then, they introduced nearly every native plant and animal species found in the Wellington area before the arrival of man, to the two hundred acres. The effect is amazing, and the native wildlife has simply abounded there!

Our tour started off with being given flashlights (they call them torches here in New Zealand) and headsets to help us hear our guide. Our group of about fifteen people then proceeded into a small exhibit explaining the preserve, and then we started on our journey. Common birds seen and heard throughout the tour were KAKA, PARADISE SHELDUCK, PIED SHAG, MOREPORK, MALLARD, GREY DUCK, and BROWN TEAL. It was especially a treat to see the Brown Teal since they are an endangered species.

Our first stop was to admire some PARADISE SHELDUCKS along the predator-free fence. The females in this species are more attractive than the males, which is an oddity for avian species. Here is a picture of the one female present amongst the gaggle of male shelducks: 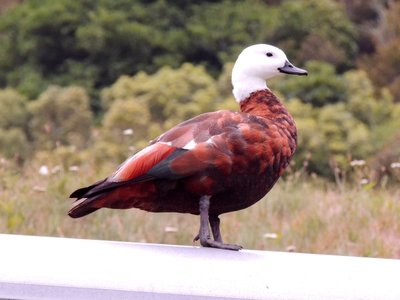 Then we visited a colony of nesting PIED SHAGS. A BLACK SHAG was also seen among the others. 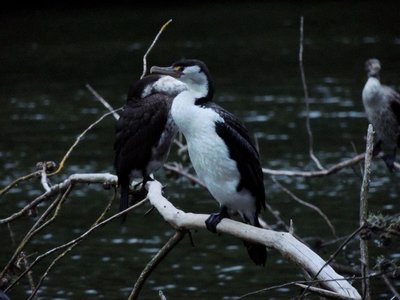 Next, our guide stopped us at a certain part of the trail, told us that they had laid out bait for kiwi along the area, and we waited. Then, after a single minute of waiting, an insanely cute, furry little creature came bouncing down the path toward us. It was a LITTLE SPOTTED KIWI! The BEST bird I have EVER seen! It then proceeded to forage for the bait set out near our group, allowing for photos. Note that it was dark by the time we saw this bird and the guide didn't allow flash photography, so these are the best quality images I could get: 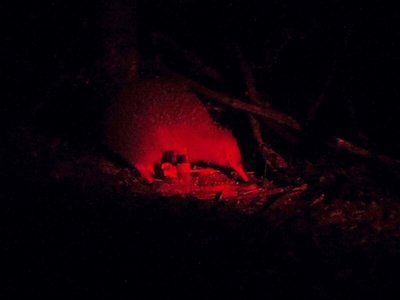 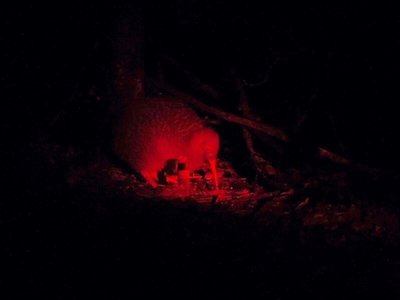 After that, the rest of the tour was pleasant but not as exciting. A few other nice highlights of the tour included a second sighting of a different LITTLE SPOTTED KIWI and two more kiwis singing throughout the night. Also seen were amazing glow-worms and an odd reptile that is extremely rare, a Tuatara. Here are the pictures:

Glow worm. The glow worm is the microscopic dot of light just to the left of the center of the photo. 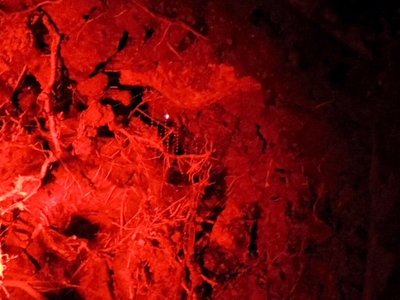 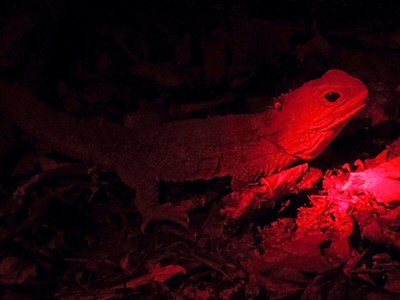 It was the best day of birding I have ever had. A bird-of-the-day award is too undistinguished for the Little Spotted Kiwis I saw today, so I will award it my bird-of-my-life award. Before this it was a Cerulean Warbler, and before that it was a Snowy Owl. It will be pretty tough to knock this bird off of first place!

Tomorrow we take a ferry from Wellington to the South Island, so we will be saying our goodbyes to the North Island of New Zealand. What an adventure it has been so far!

Glad to see your patience and perseverance has paid off. So close to 500 birds. I'll be interested to know how many total new life birds on this trip. Still so any more to discover.

I know you know how cool that is. I have never seen one in the wild. The preserve sounds fantastic. Lucky you!