This is the promised post for yesterday and the day before (1-31 and 2-1 New Zealand dates).

FRIDAY, JANUARY 31:
Our big travel day from the North Island to the South Island of New Zealand happened two days ago. We got up bright and early around 6:45AM to catch our ferry. Once we got on our ferry shortly before 8:00AM, we found a nice comfortable corner to hang out in during the ride and we waited...and waited...and waited. The ferry finally pulled out of the Wellington bay at half past ten, a whole two and a half hours late!!! Thankfully there was a kids' movie on TV, which kept Pearl's short temper "at bay" (and yes, pun intended)!

The ferry was nice and large and it had ample outdoor and indoor space. A first look outside while we were still in the bay around Wellington was pleasant and I saw a few far-off shearwaters and petrels of which I couldn't identify.

Later, after we had pulled out of the bay and made it into the Cook's Strait between the North and South Islands, I went out on deck for a substantially longer period of time. We waved goodbye to the North Island and soon the magnificent cliffs and peaks of the South Island came into view. I saw some wonderful seabirds, including many WHITE-FACED STORM-PETRELS, a lone WESTLAND PETREL, and three stunning ROYAL ALBATROSS! It was really, really awesome to see three albatross, especially since they came so close to the boat. Their wingspan is gigantic, and it is almost unbelievable that they can fly.

Here are some photos: 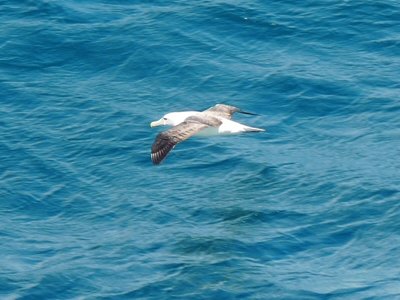 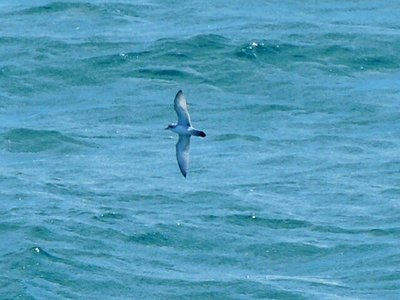 The rest of the boat ride was uneventful, and we docked in the village of Picton on the South Island a bit before two in the afternoon.

In Picton, we took two buses and finally a boat to our home in the nearby Marlborough Sounds. Our home was in such an inaccessible bay that the only ways of getting to the house from Picton, the nearest town, is either a twenty-mile mountain bike ride or a fifteen-minute boat ride. Our family wisely chose the boat option, and Pearl and I even got to take turns operating the boat for a bit!

Once we got to our home, I immediately found this gorgeous NEW ZEALAND BELLBIRD: 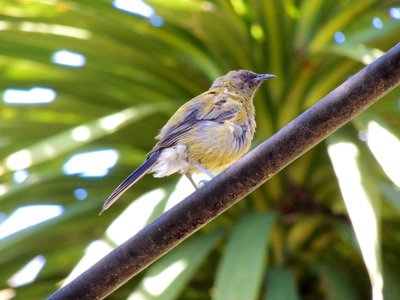 Next, I went kayaking around the bay we're located in and saw some very interesting wildlife including two large sting rays that swam under the boat, a colony of SPOTTED SHAGS (known as cormorants in America), and possibly even a jellyfish.

When I got back, my mom was guarding our cottage against a WEKA of which we were warned that it likes to go in the local cottages in search of food (and believe you me, this bird was NOT shy!). The WEKA is a large chicken-like marsh bird in the rail family, and it is endemic to New Zealand. This country must be the only place in the world where rails are considered a nuisance! Here is a photo of the bird: 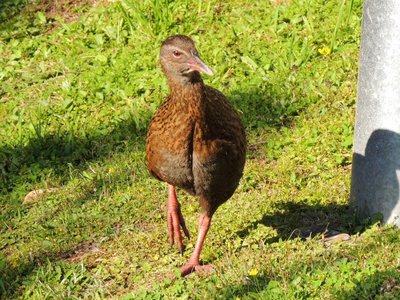 The rest of the evening was quiet; my family and I spent it soaking in our hot tub, birdwatching from our deck, and eating a fabulous steak dinner. Other birds seen and heard around our cottage included COMMON BLACKBIRD, SONG THRUSH, GREY WARBLER, NEW ZEALAND PIGEON, TUI, and AUSTRALASIAN HARRIER in addition to the ones mentioned above.

The albatross gave the kiwi a fair run for its money for the bird-of-my-life award, although I think that the kiwi still holds that distinction, so the albatross will have to settle with bird-of-the-day.

SATURDAY, FEBRUARY 1:
My full day in Marlborough Sounds was packed with fun and great birds.

Our first big activity of the day was a beautiful hike through the jungle in the morning. To get to the trailhead, however, we had to kayak across our bay, which was very fun. Here is a photo of my dad kayaking: 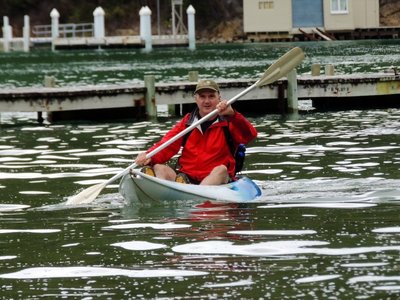 On the trail, I saw this "Sooty" subspecies of a NEW ZEALAND FANTAIL. It was not a life bird, although it was the first time I had seen that particular subspecies. A subspecies is a certain genetic group within a species that differs from the main population in some characteristic, for example, this bird was black instead of orange and gray like the other fantails I have been seeing. Here is the photo: 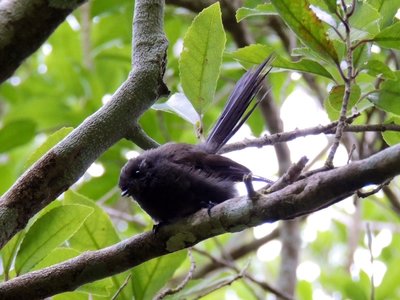 On the way up, my mom, dad, and my sister posed for a photo at a wonderful viewpoint: 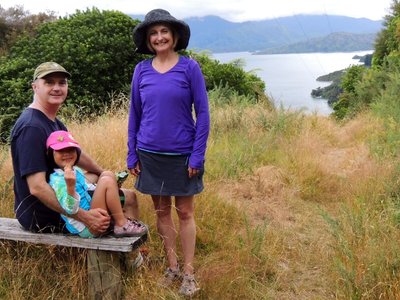 We had lunch at the top of the trail. It was beautiful, with views of gorgeous bays, sounds, and rainforest-clad bluffs. Here is the view of the surrounding bays from the summit of the hill the trail was on: 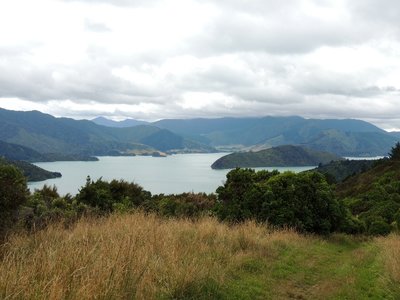 After hiking, I went on a big kayaking excursion my myself. A couple times the waves were so fierce I almost fell off my kayak! I saw many marine animals including a few sting rays, a huge jellyfish, lots of green mussels, and a nesting colony of PIED SHAGS.

After kayaking some more after the hike, we spent the rest of our day relaxing at our cottage. Throughout the day, this WEKA, a large species of rail, kept investigating our house: 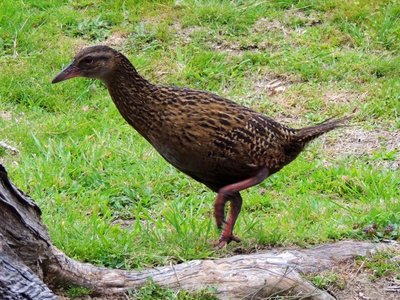 At one point I even had to chase it away because it wanted to go into our cottage! Wekas look like a cross between a kiwi, a chicken, and a duck. Such a silly bird. Other birds seen and heard throughout the day included KELP GULL, WELCOME SWALLOW, TUI, GREY WARBLER, AUSTRALIAN SILVEREYE, and NEW ZEALAND BELLBIRD.

It was a very pleasant day, one of my favorites so far. Bird-of-the-day to the WEKA. I will surely miss that mischievous bird.

Stay tuned, because today our family will travel to Abel Tasman National Park, a beautiful park located on the lush, coastal area of the northwestern South Island. I will hopefully post about today at the end of the day.

Henry
World Life List: 501 Species (no new life birds today). At this point I am fairly confident that I will achieve my goal, a life list of at least 700 avian species, by the end of my travels in May.