A Lark in the Grass

Upon seeing an alert for a continuing Lark Sparrow in the north end of Central Park, I headed there after classes and before my lesson to see if I could find this east coast rarity.

After exiting the B subway at 96th St, I walked into the area of the park where the Lark Sparrow has been reported. Immediately, I had good energy from the park because loads of the more common native sparrow variety, CHIPPING SPARROWS, greeted me! Unphotographed were also plenty of WHITE-THROATED SPARROWS and that classic winter bird, the DARK-EYED JUNCO. 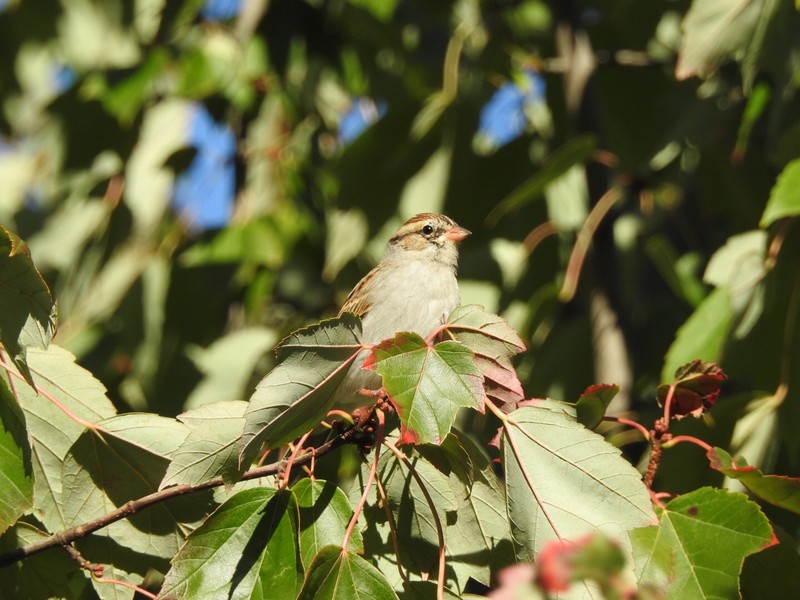 Soon, indeed a spotted a horde of birders pointing their cameras into a roped-off soccer field. This is what happens when a Lark Sparrow shows up in Central Park! 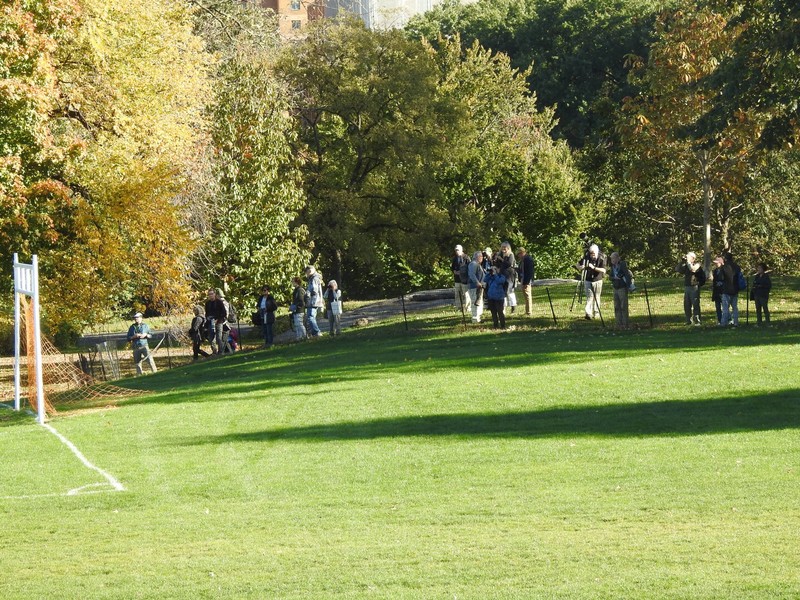 I rushed over the find out that the Lark Sparrow had just hunkered down into the grass, out of sight, because of raptors in the area. Dang! They were right: soon, a PEREGRINE FALCON winged over the park: 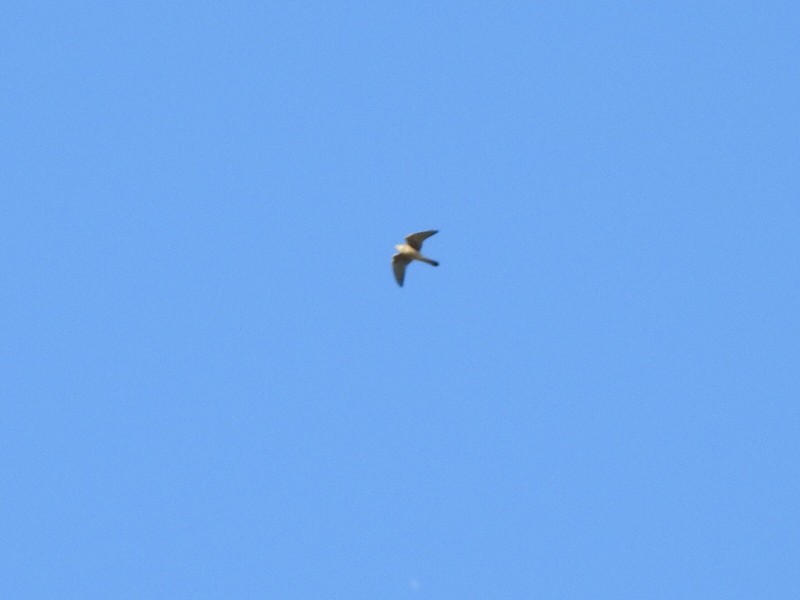 After a solid thirty minutes of waiting though, someone had miraculously been able to locate literally just the eye of the bird that could be seen peeking through the grass at us, scanning for any marauding raptors. Yup — an annoying view of it, but LARK SPARROW indeed — a “Lark in the grass!” 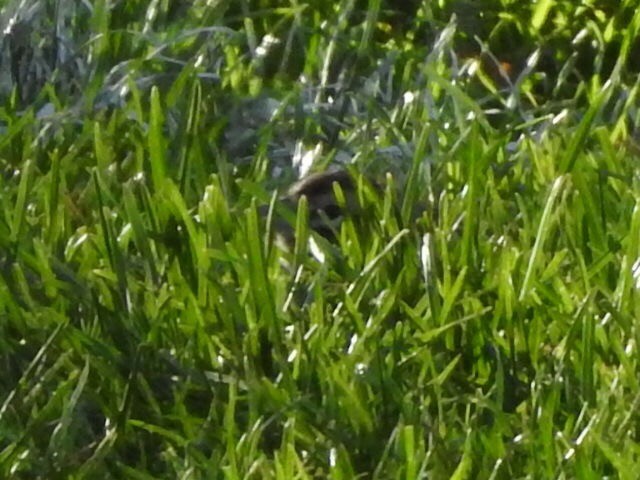 After ten further minutes, though, it briefly decided to pop above the grass for a bit (luckily for me my camera was trained on the bird at that instant), and we were afforded a much better look at the bird’s beautiful facial features. 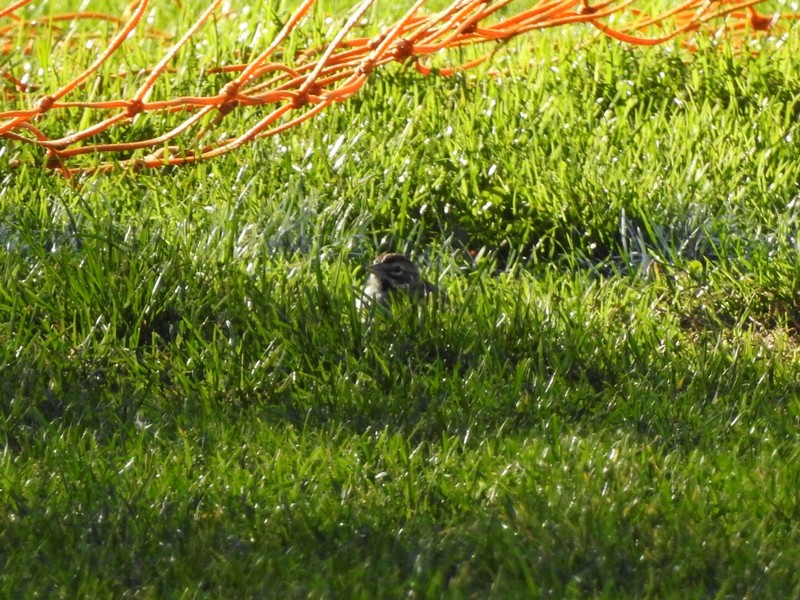 What a strange setting for a rare bird! 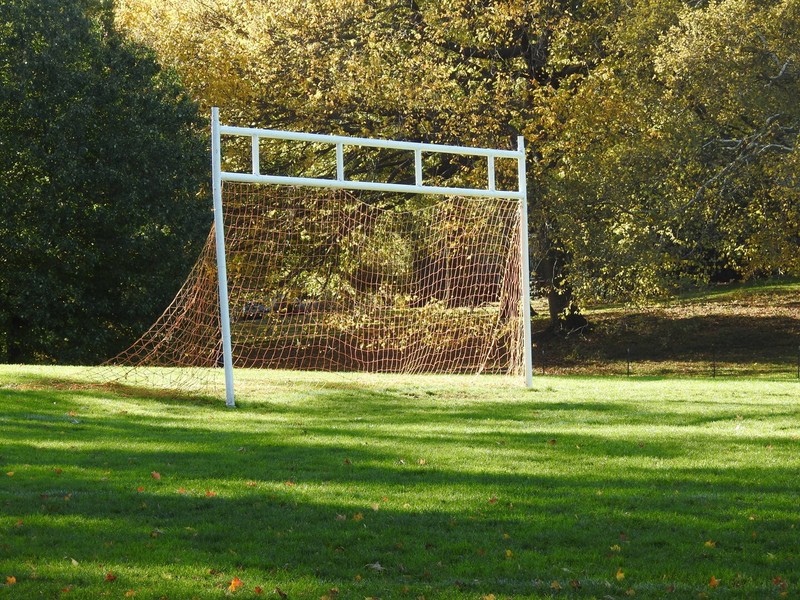 Unfortunately, the sparrow soon flushed and was not refound today, and it was probably in its best interest to do so as the raptors were out in full force today, including one of the resident RED-TAILED HAWKS: 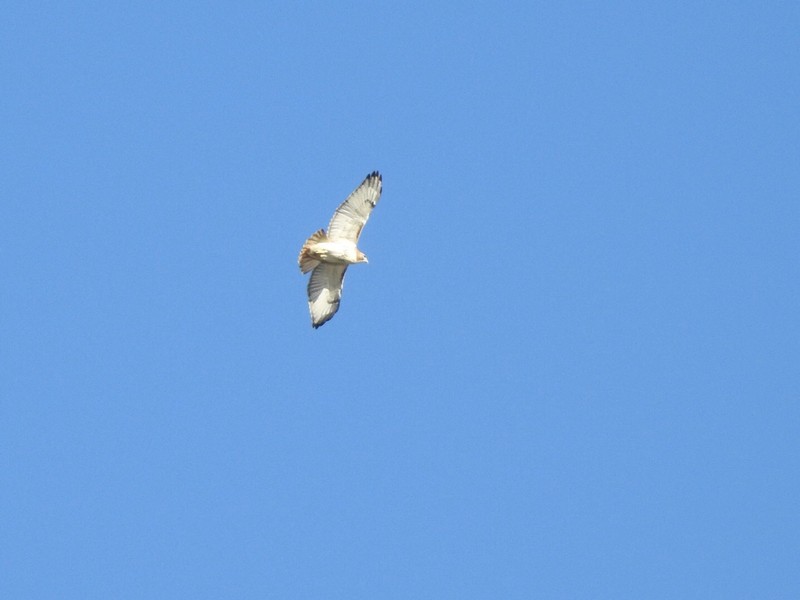 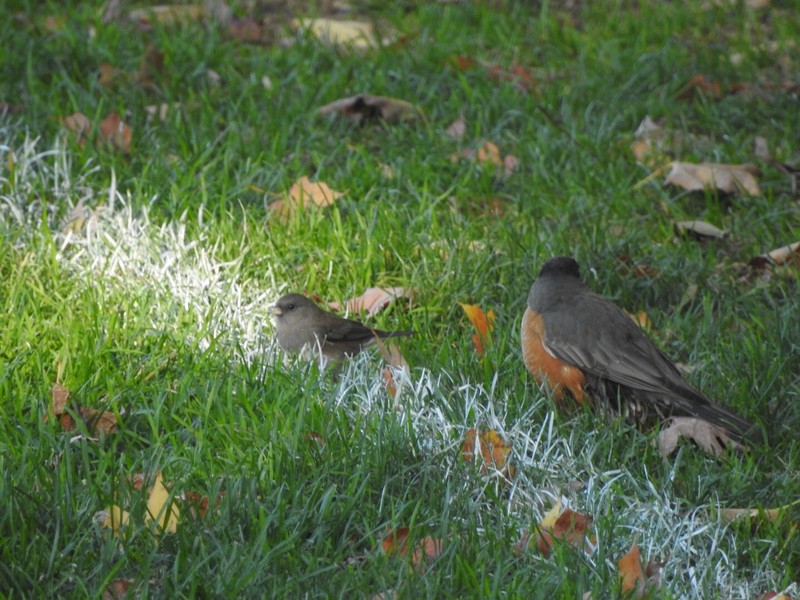 Although the warbler migration season is coming to an end, I did find two species today including these lovely PALM WARBLERS: 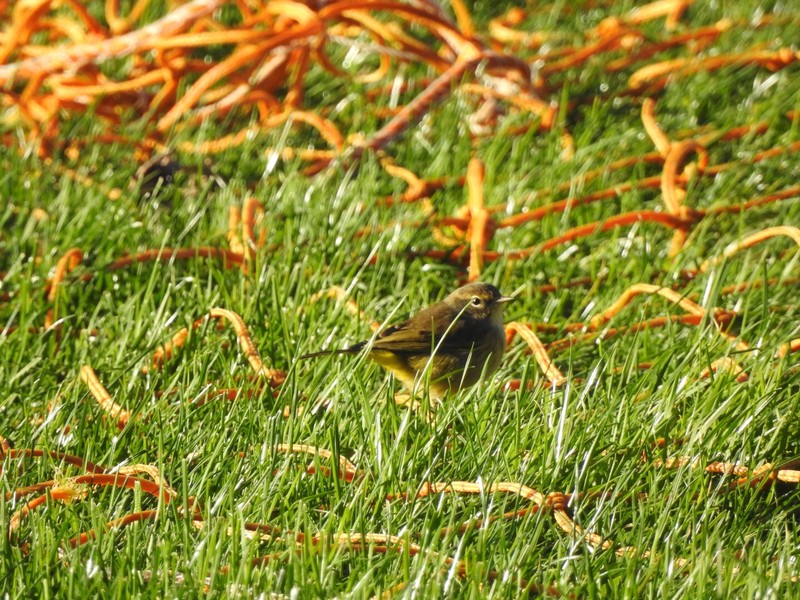 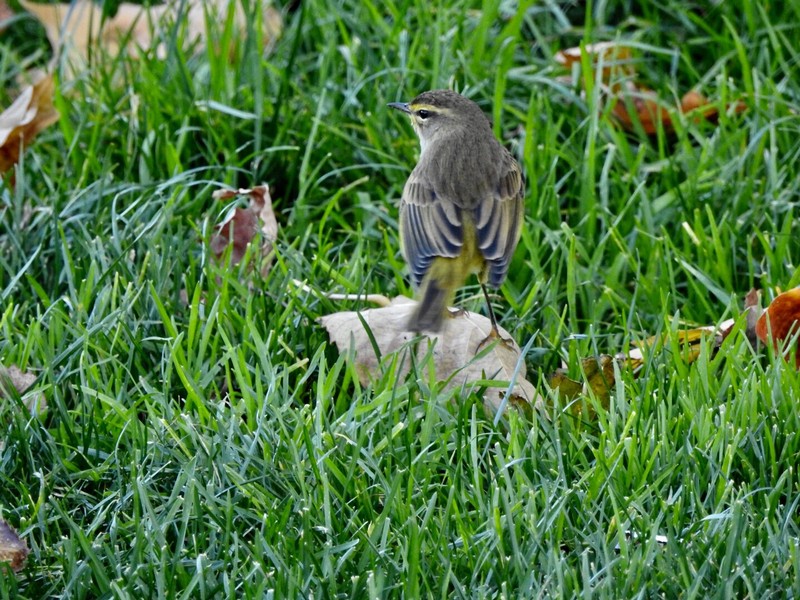 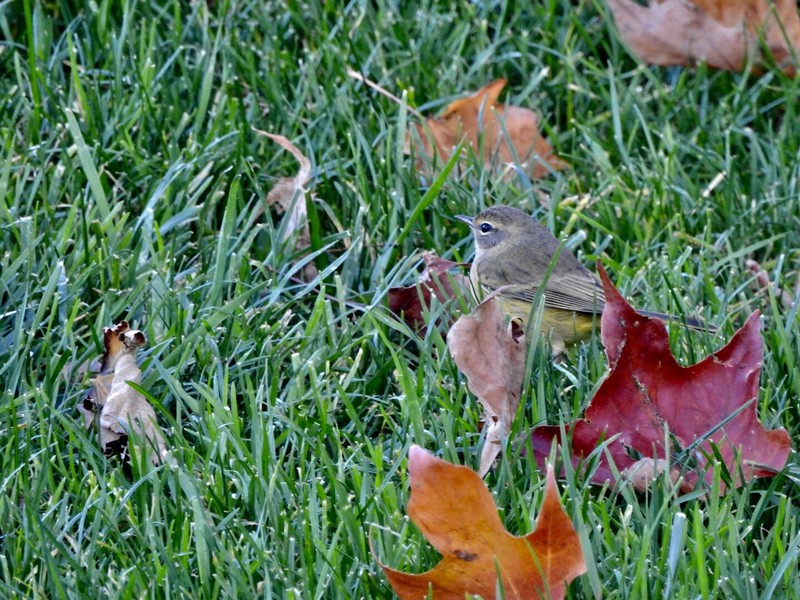 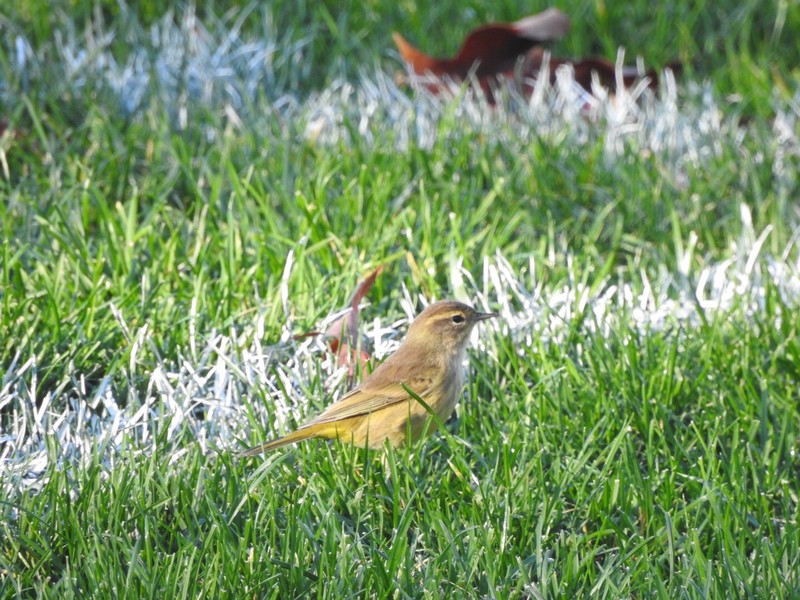 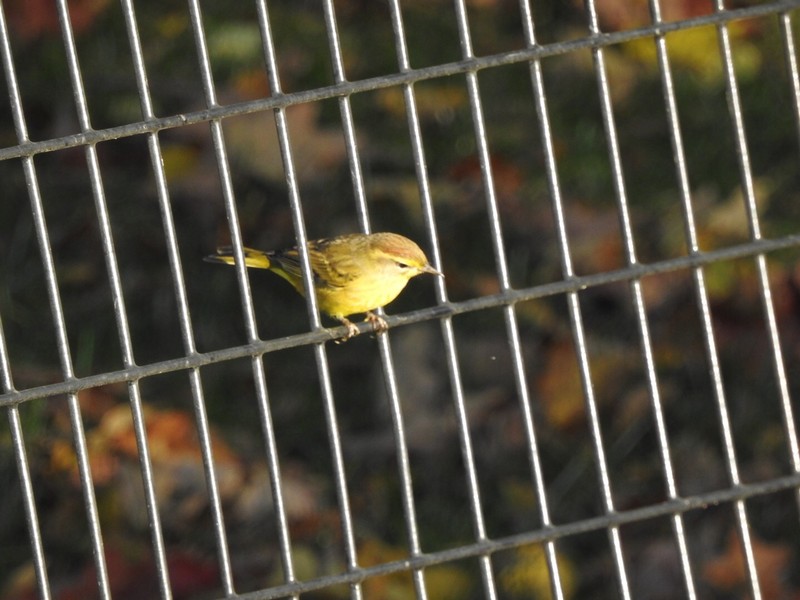 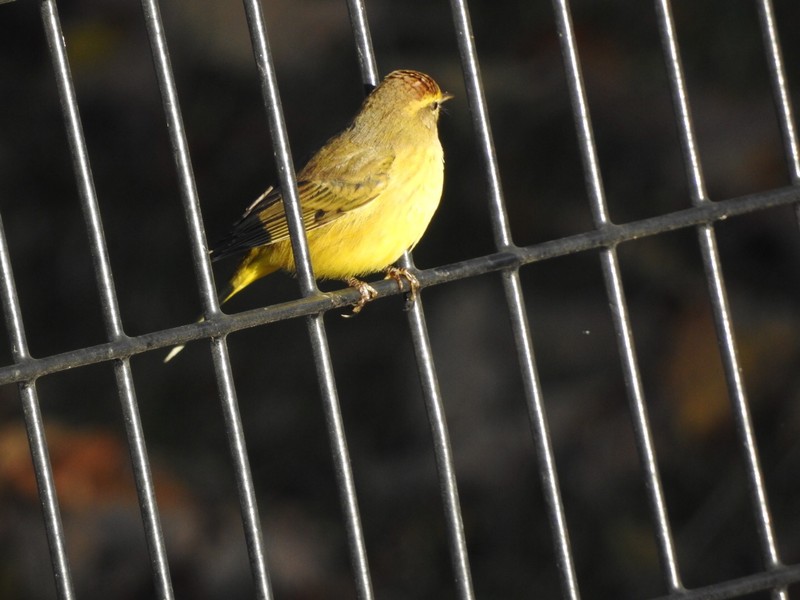 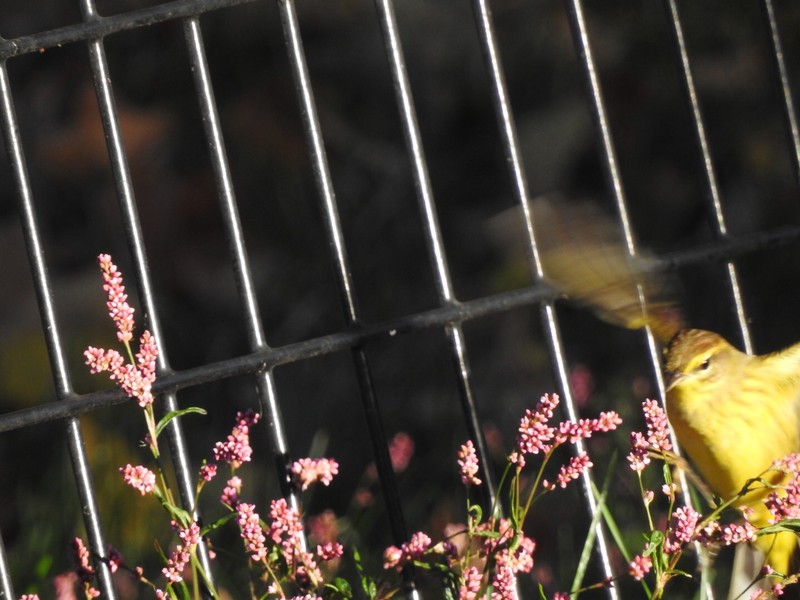 This AMERICAN KESTREL male was the smallest but mightiest of them all today — at one point he swooped down right in front of the crowd of birders looking for the Sparrow, and nearly caught a Junco, chasing it off into a nearby bush. Then, we observed an extremely interesting behavior: as soon as the Kestrel was out of sight, another Junco flew over to the bush of the fled Junco and went right to the other bird, as if to check if the bird was okay. Very cool, and seen by multiple observes! Maybe this is a demonstration that birds have a capacity for higher-level thinking & emotion than we humans have thought. Here is that darn Kestrel: 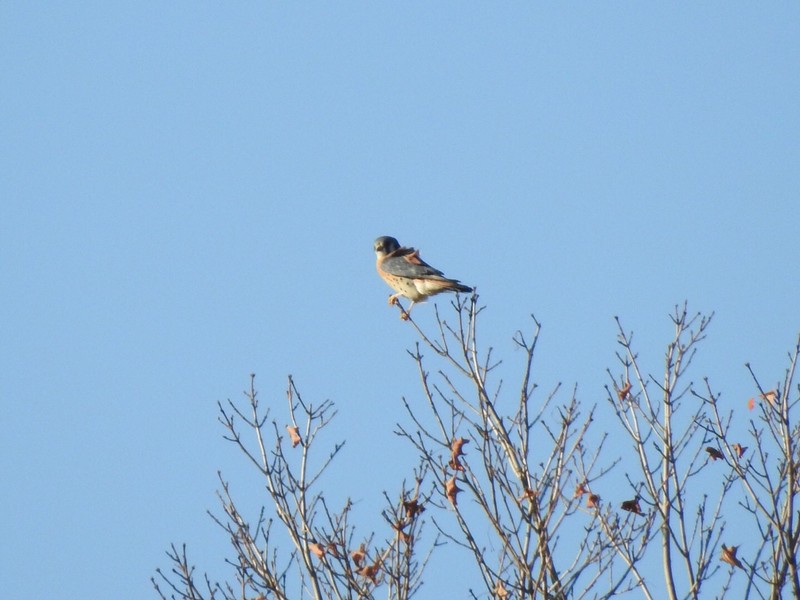 One other interesting sparrow found today was this FIELD SPARROW: 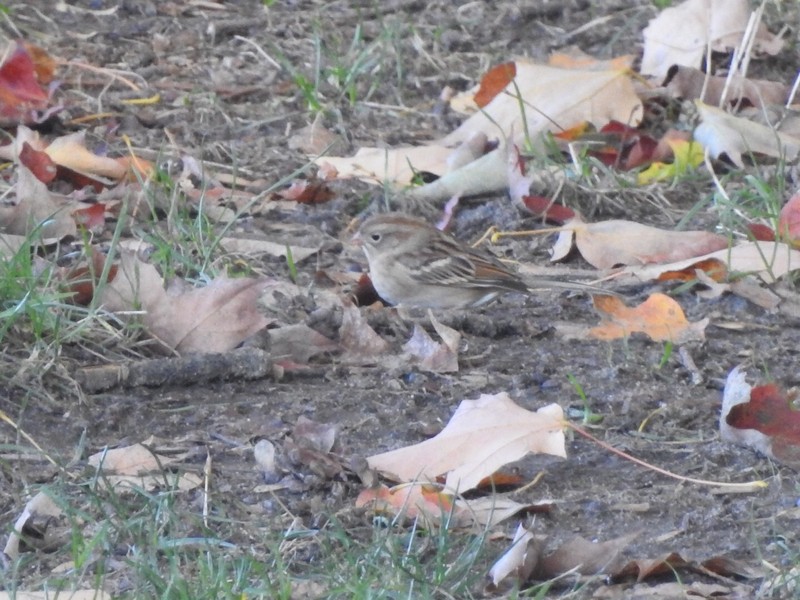 And the second warbler species today was this gorgeous male BLACK-THROATED BLUE WARBLER I found on the way out of the park! It is definitely getting on the late side for these beauties, but I am not complaining by any means. 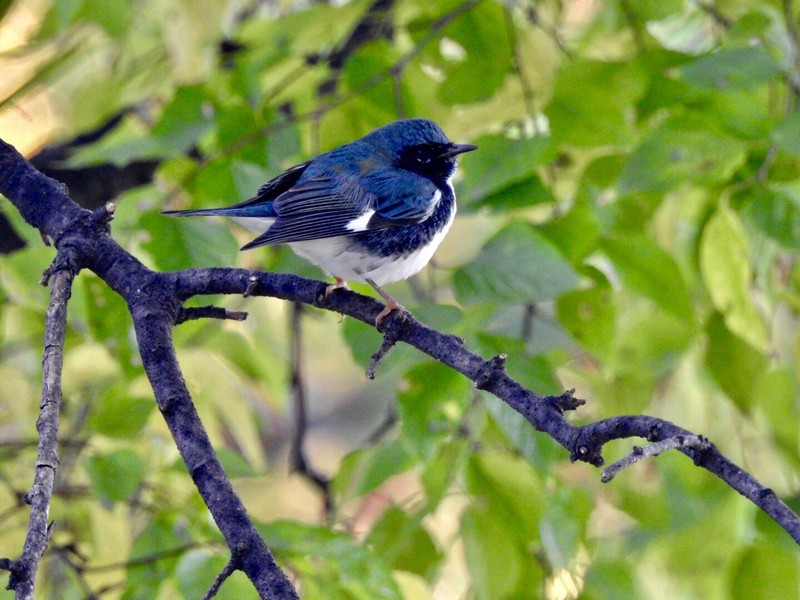 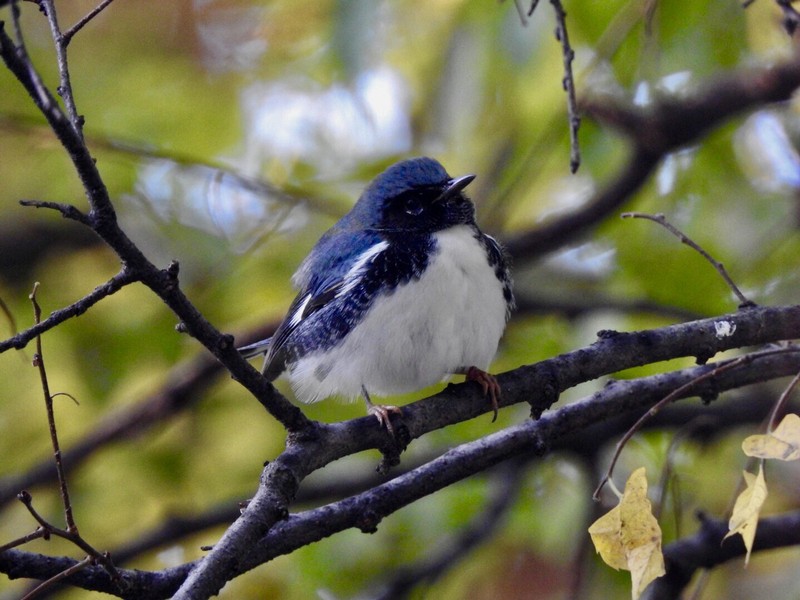 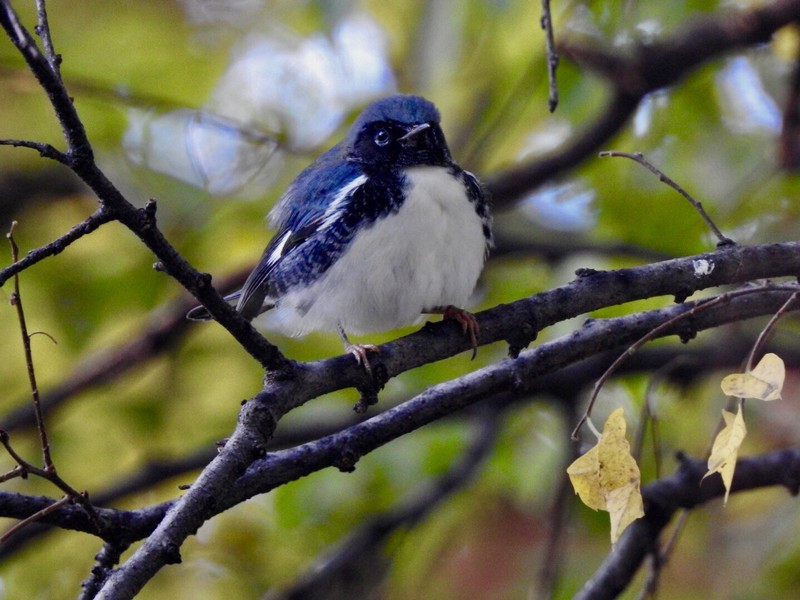 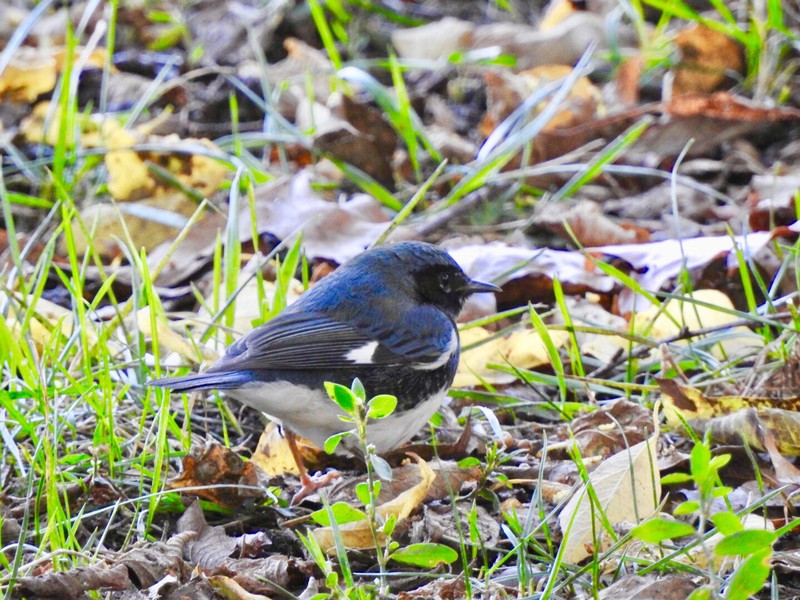 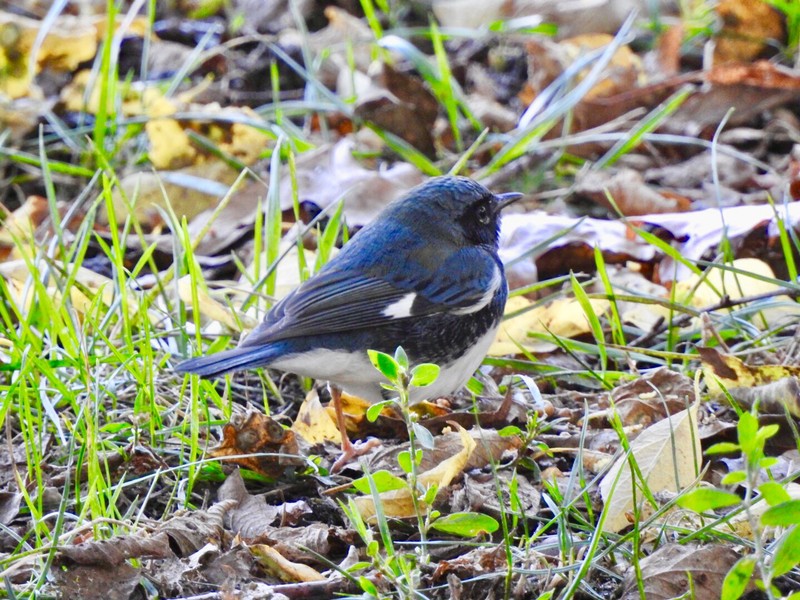 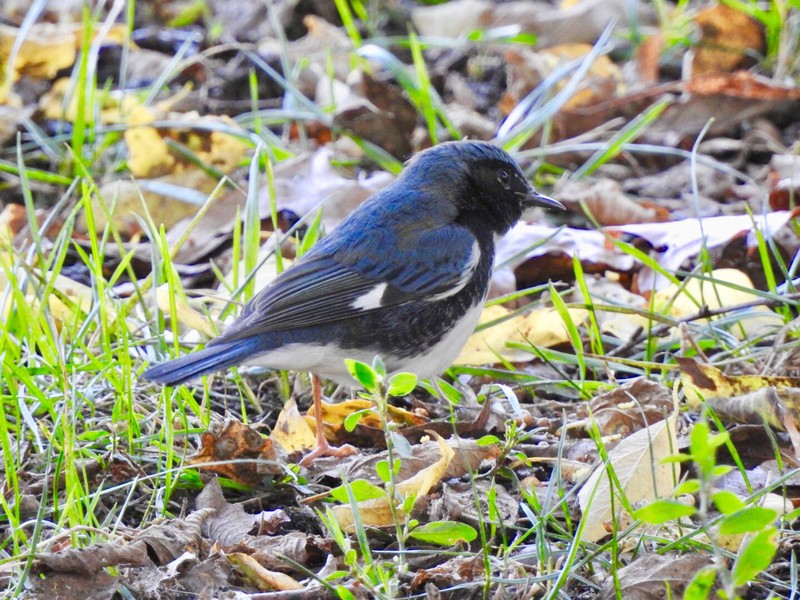 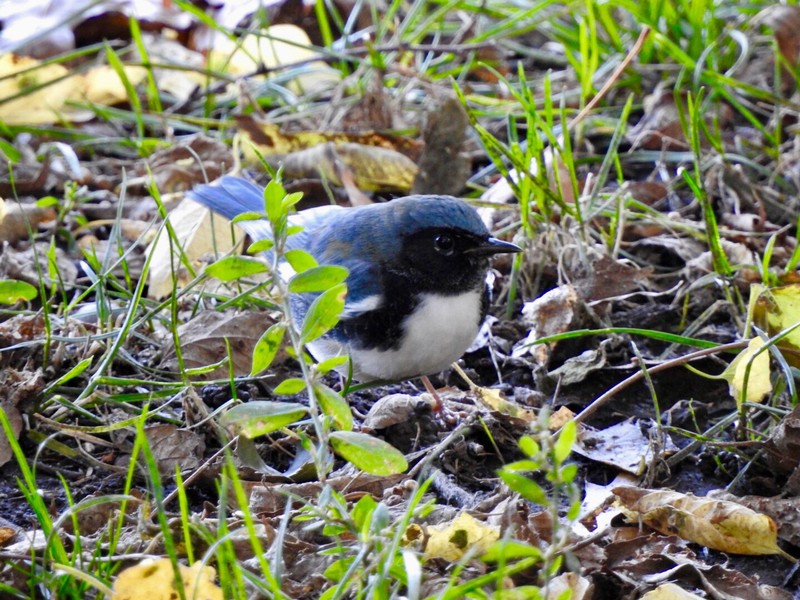 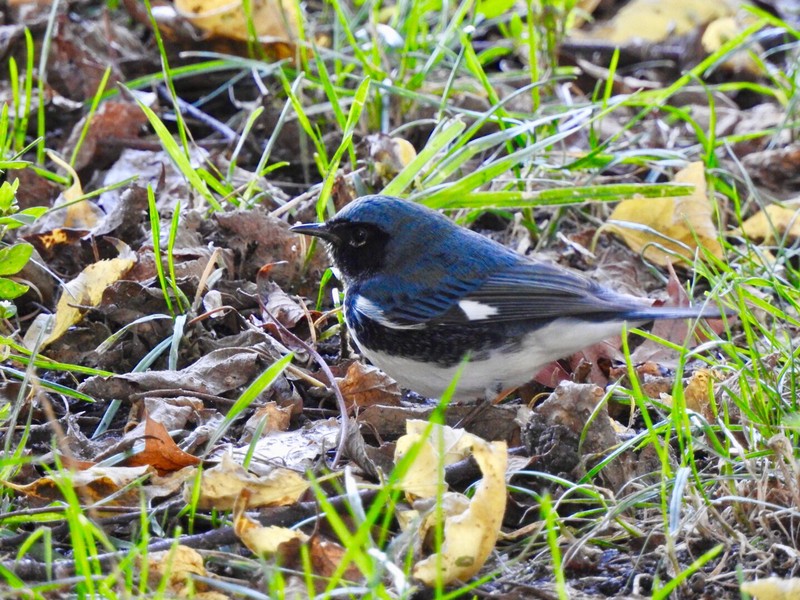 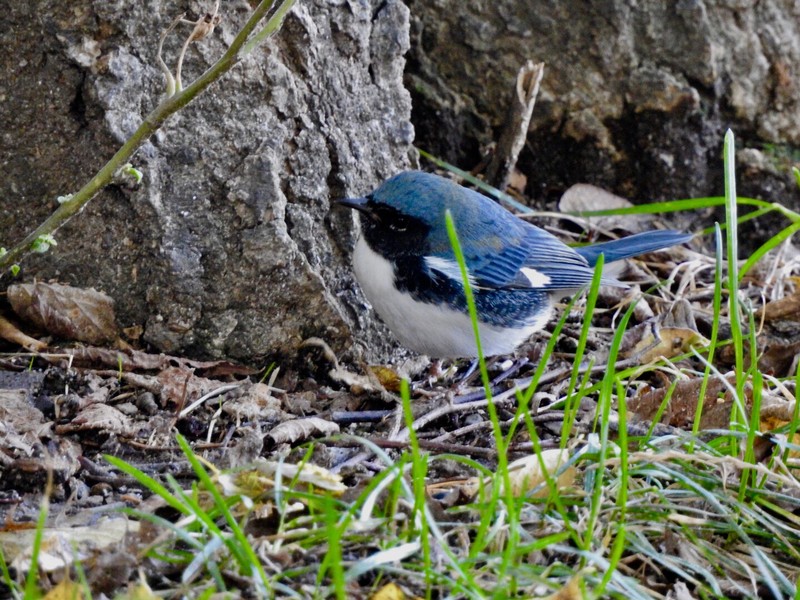 This cutie RUBY-CROWNED KINGLET was also foraging on the ground nearby. 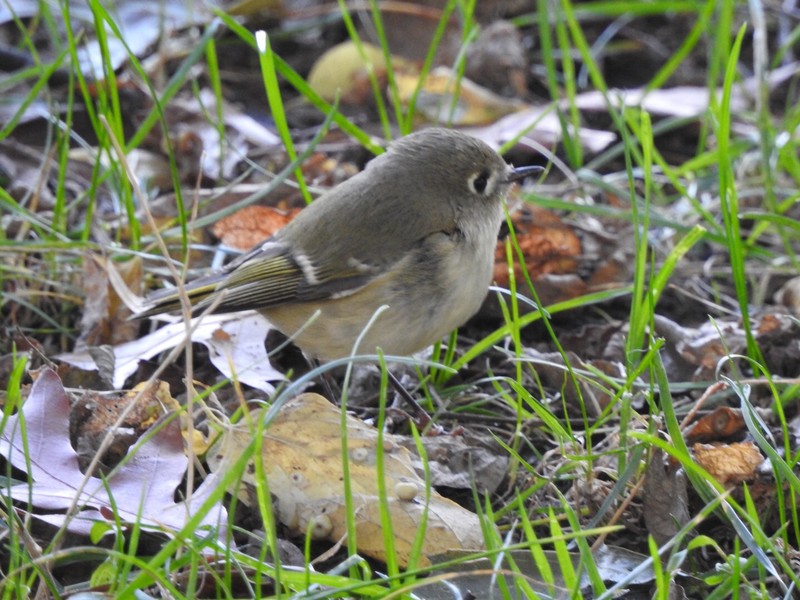 Walking through the Upper West Side to get to my voice lesson after birding yielded this immature RED-TAILED HAWK, first spotted by some random construction workers on the street. Maybe a “spark bird” for them! 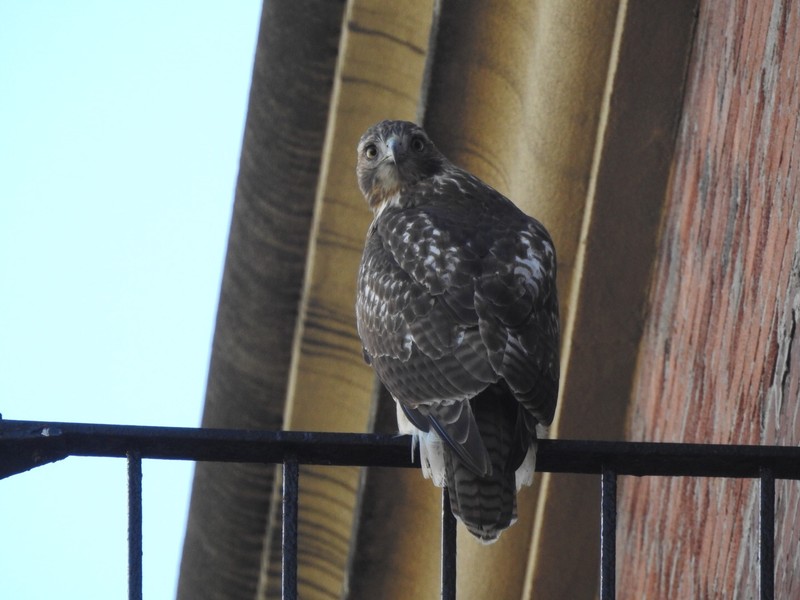 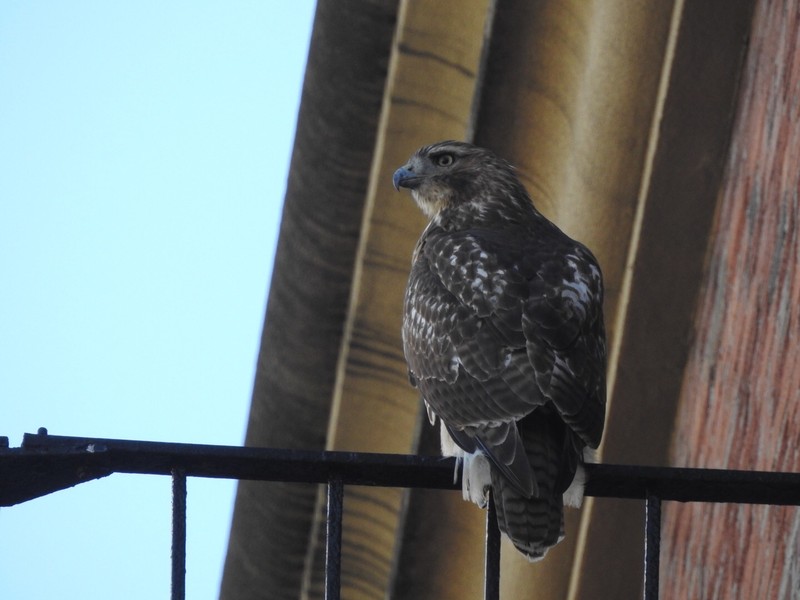 Bird-of-the-day to the Lark Sparrow, of course, and runner-up to the Black-throated Blue Warbler. Always great to get out! Stay tuned!

Posted by skwclar 18:05 Archived in USA