Since wifi lately has been nonexistent, here is the combined post for the latest two full days of our travels. The wifi is still very limited, so you will see some captions that don't have photos to go with them. I will add photos to them later.

Two days ago was our travel day from our "cozy" backpackers lodge to a more spacious motel in Fiordland National Park.

The backpackers' lodge was very tight, and with ourselves and our bags, we didn't have any room to spare. It was also horribly buggy, which didn't make things any better.

I managed to get off the hook packing the car because I went out birding. I saw some reasonably good birds, including the following: 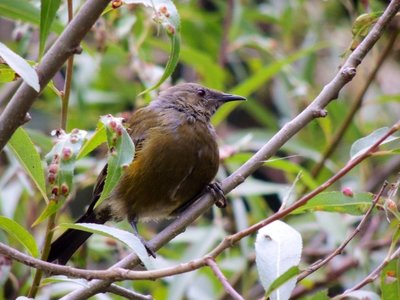 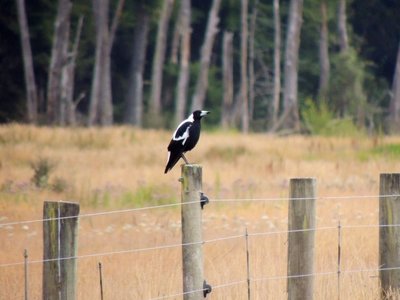 Then, my family picked me up and we drove to Fiordland National Park. Our only memorable stop (except for our lunch stop) on the way was at the park entrance for a short nature walk at the beautiful Mirror Lake. The New Zealanders must be famous for their boring, overused names of natural features! Even though it was a bit mucky, you can see why it was named that way: 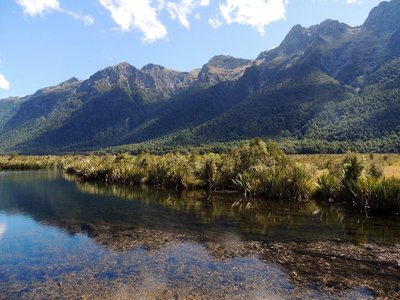 I saw a few NEW ZEALAND SCAUP there, including this female: 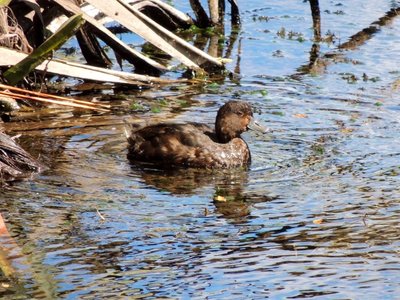 After we arrived at our spacious motel, my family and I took a short nearby hike to a beautiful waterfall: 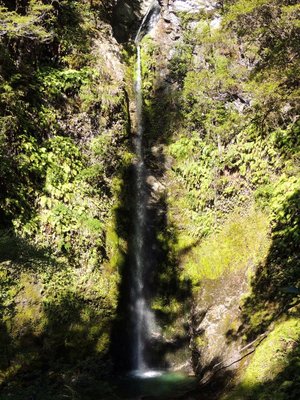 My little sister hugged this big tree on the way back: 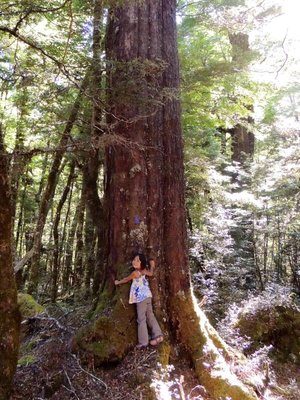 I also saw this SONG THRUSH, an introduced species: 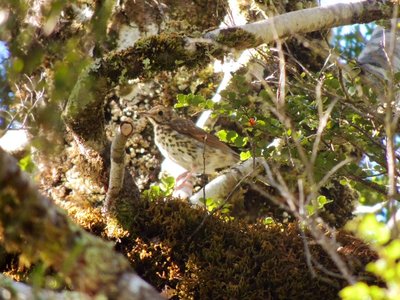 Yesterday was our only full day at Milford Sound near Fiordland National Park. It was very cloudy and rainy (even snowy while we were crossing the alpine passes in our car), so the famous views of Milford Sound were a bit obstructed to say the least. The one upside to this, however, is that there were countless waterfalls that wouldn't be present if it wasn't a wet day.

We took a boat tour of Milford Sound during the late morning and early afternoon (it is actually a fjord, not a sound, since it was carved by glaciers during the Ice Age).

Here are some scenery photos I took while on the boat. My dad and I constantly had the Lord of the Rings theme song stuck in our heads! 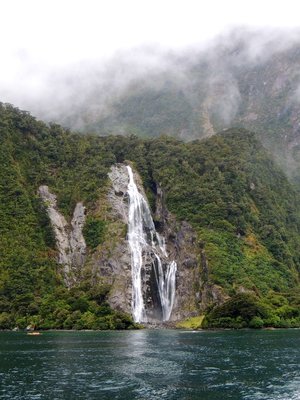 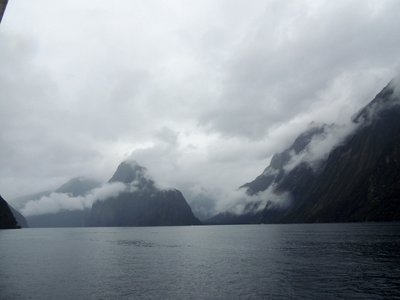 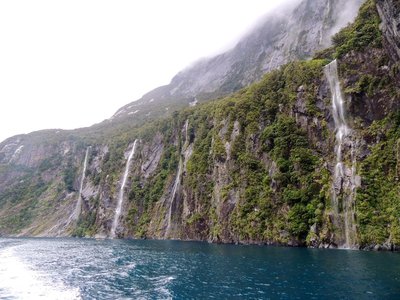 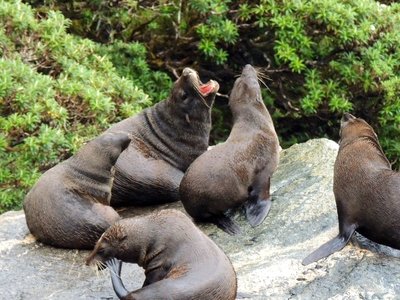 At one point we even stopped under a waterfall! My dad, Pearl, and I ran to the front of the boat and got drenched because they parked the front right under the falls! is a photo of me under the waterfall: 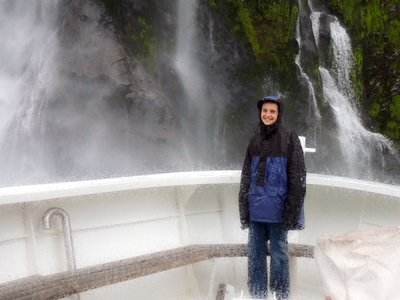 A few minutes later after we set sail again, he let us all drink water (with our own cups) from the pan which was set out when we were under the waterfall! It was the BEST water I have ever tasted. The skipper said that it was glacial meltwater that cascaded over thousands of feet of rock before ending up in the pot. Here is a photo of my sister sipping the water: 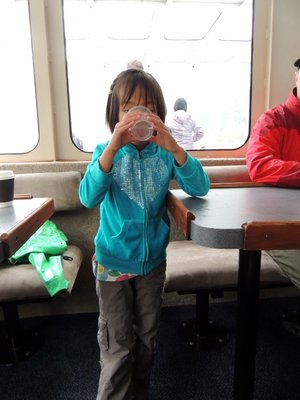 The last and final highlight of the trip was seeing a huge pod of about twenty dolphins play alongside and in front of our boat. Here is a bad photo of them (I couldn't get good quality photos because it was very rainy and I was worried about my camera): 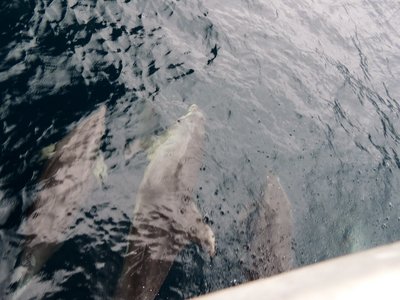 After the boat tour, we took a short walk to see a section of cascades on a fast-moving mountain stream. I saw this lovely NEW ZEALAND PIGEON along the way: 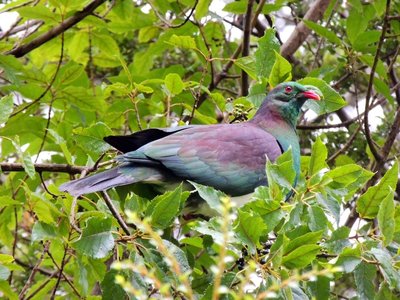 Below are a few photos of the cascades. The cascades looked basically like modern art, except a whole lot better: 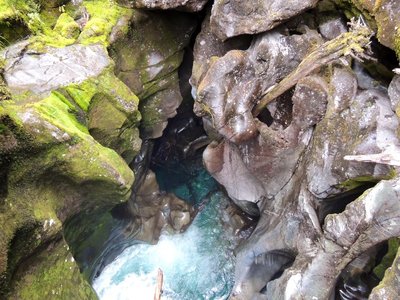 On the drive back to our motel we took an unexpected stop when we saw people feeding KEAS (Mountain Parakeets) at a car-park along the highway. They are very outgoing, mischievous birds, and some were even landing on cars and pecking on the metal, as you can see in the photos: 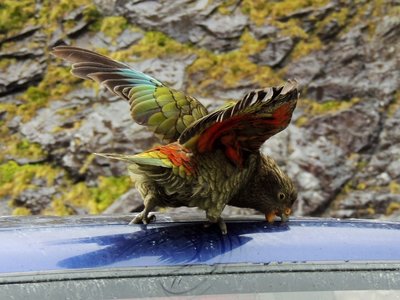 A productive birding walk near our motel before retiring for the night yielded the following species and more: 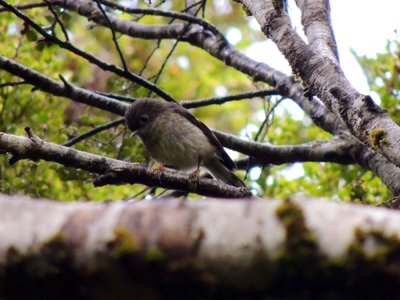 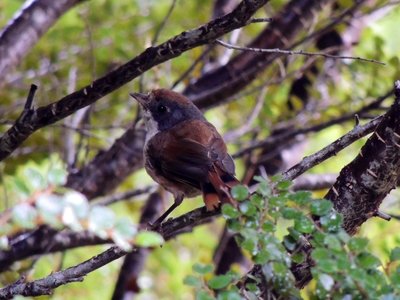 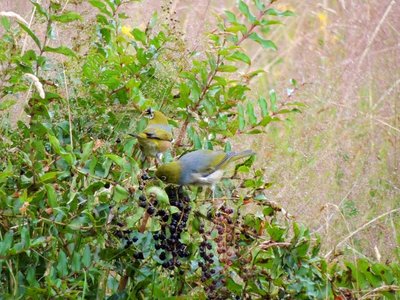 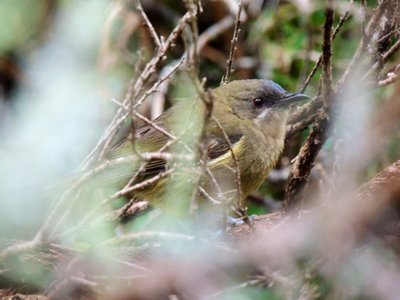 While I was counting a number of RIFLEMEN in front of me, a larger, gray bird hopped onto a branch barely an arm's length in front of me. To my astonishment, it was a wonderful adult male NEW ZEALAND ROBIN, an avian species I have been searching for this entire trip so far. It was amazing I saw it when I did, because yesterday was really the last time I was in its proper range and habitat this year. Here is its photo: 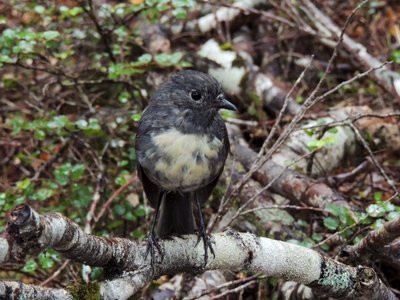 What a wonderful bird, and so friendly also! I later found out that the reason the robin came so close to me was because it wanted to eat the little insects I stirred up when I moved around.

The bird-of-the-day award will again be shared, this time by the numerous and outgoing KEA (Mountain Parakeets) and the friendly life bird NEW ZEALAND ROBIN.

On these days my family and I took a gorgeous night cruise of Doubtful Sound.

The night cruise was very lovely. We had a spacious, four-level vessel with a very friendly, attentive crew. The scenery was definitely the highlight of both days on the ship.

Here is a photo of my mom with the magnificent scenery in the background: 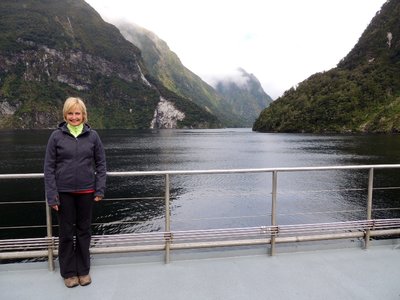 Before dinner on the first day, we vacated the Doubtful Sound and headed into the open, choppy waters of the Tasman Sea for a brief while. At the mouth of the sound I saw this WHITE-FRONTED TERN: 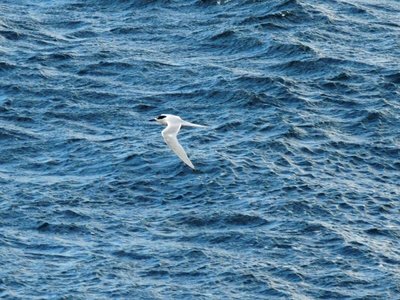 Out in the open waters, I saw some amazing pelagic species, including AUSTRALASIAN GANNET, SOOTY SHEARWATER, and even BULLER'S, DARWIN'S, and WHITE-CAPPED ALBATROSS! Here are the photos: 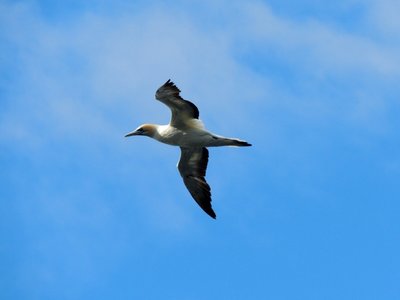 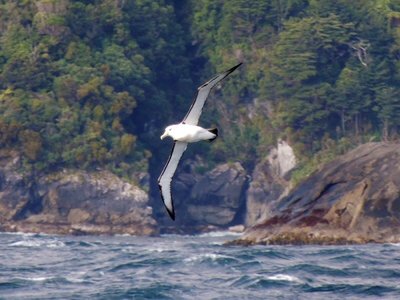 Before we headed back into Doubtful Sound, the ship stopped at a colony of New Zealand Fur Seals: 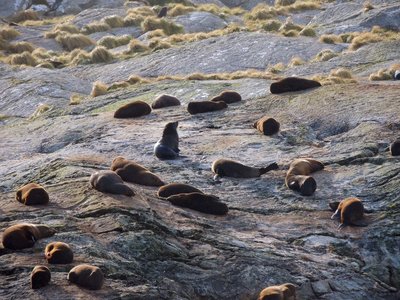 I also saw this beautiful rainbow: 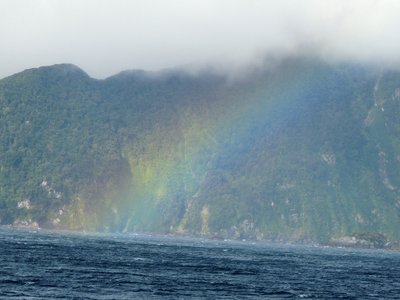 And this gorgeous waterfall: 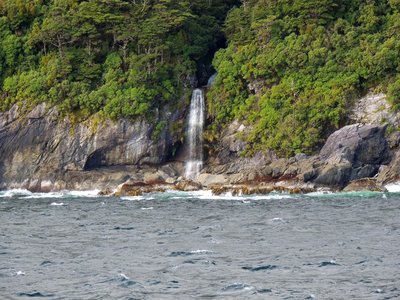 It was such a magnificent area. Here is the last scenery photo of the voyage: 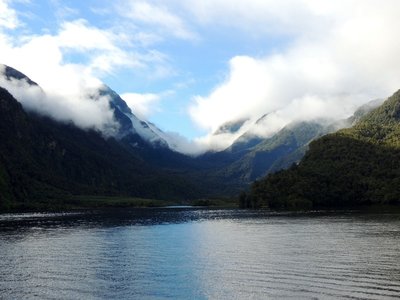 Tomorrow is our last full day in New Zealand, and then it is off to Australia!