Today my family and I took a pelagic tour of the Great Barrier Reef. We woke up bright and early and drove the forty-five minute drive to Port Douglas, where we boarded our ship for the day. It was a nice, two-story yacht that was very well laid-out; we had room to spare.

Sadly, since our family didn't purchase waterproof cameras today, I didn't manage to photograph any of the stunning underwater scenes we encountered.

I found this WELCOME SWALLOW shortly before we embarked upon our one-and-a-half-hour journey to our first stop on the Great Barrier Reef: 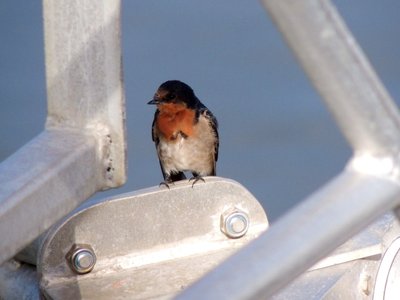 The first thing I noticed when we stopped is how shallow the water was and how far the shallowness of the water extended in a roughly straight line parallel to the faint coastline of Australia we could barely make out. Of course, this shallowness we were seeing was the majestic Great Barrier Reef, extending for miles (or, kilometers, here in Australia), beyond our boat.

My mom and I were snorkel buddies throughout the day and our first snorkel at the first stop was absolutely stunning. The vibrant colors of the fish and the coral, combined with the intricate, submerged topography of the reef made it look like we were peering to a different world. And, in a sense, we were. My favorite part about snorkeling was diving down under water, around the coral, and just listening to the pure silence of the underwater world. I later learned that some faint crackling noises that I heard when I was underwater were actually fish chewing on their food...amazing!

After snorkeling for a good long time, maybe forty-five minutes or and hour or so, we swam back to the boat for the ten minute ride to our next stop. It was then when I noticed that some BROWN BOOBIES as well as COMMON and BLACK NODDIES were perched on a nearby walk: 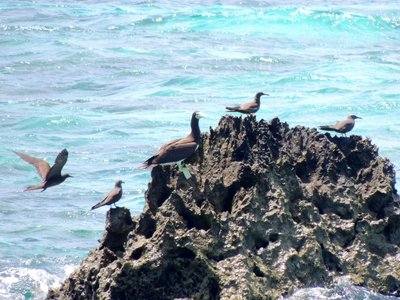 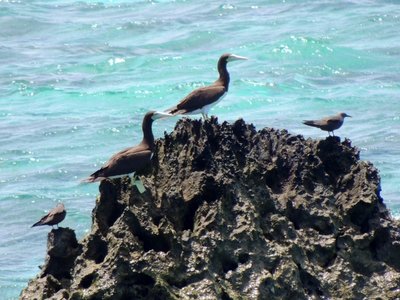 When we arrived at our next stop, the staff was just then serving lunch, so my family and I ate lunch while everyone was out snorkeling, so we didn't have to wait in any extremely long lines.

Of course, we ate quickly so we still had ample time to snorkel and swim at the second stop. This stop was even more magnificent than the first one, with such a wonderful diversity of marine life, especially the large schools of fish that roamed around as well as the tiny ones that you almost had to almost squint to see. I saw fish of every color of the rainbow, from ones that were various shades of pink to a certain small fish that was orange and blue. The first highlight of that stop was swimming through an underwater archway of coral, which was a truly unique experience. Then, my mom and I immediately found a Giant Oyster; it was nearly the size of a fawn deer! The third and final highlight of that stop was having a six-foot shark swim about twenty feet under my mom and I, which was more intriguing than ominous, contrary to what you would imagine.

The third stop was at about two in the afternoon. It was called Castle Rock, a coral reef elevated upon stark cliffs over a hundred feet in places over the surrounding ocean floor. The drop-offs under the amazing reef were quite a sight to see. At one point there were submerged pinnacles just outside of the Castle Rock that you could swim between, which was my favorite snorkel spot of the day. There are some parts of the Earth that are just stunningly beautiful, and this place was definitely one of them. I was so moved by the last spot that I took my dad to it, also, and he was equally wowed.

The rest of the day was for the most part uneventful. The Great Barrier Reef belongs among the most beautiful places I have ever been to: Yosemite National Park in spring, Idaho's Sawtooth Mountains in summer, the Grand Teton Range any time of year, Volcan Baru in Panama, New Zealand's Mt. Cook National Park, Milford Sound in New Zealand, and now the Great Barrier Reef in Australia.

Since it is a challenging task to persuade me to believe that anything is more beautiful than snowy mountains, this tour of Great Barrier Reef was truly a life-changing experience. Bird-of-the-day to the lifer BROWN BOOBIES.

Stay tuned because tomorrow I will head with my family to Daintree Rainforest to look for the rare Victoria's Riflebird, a beautiful species of bird-of-paradise.

Posted by skwclar 03:02 Archived in Australia

Loving your blog here! We saw a Victoria Riflebird last year while we were in Queensland. A bit further south than were you are now. We were in a rainforest lodge in the Tablelands. The Riflebird came right up on our porch!

I'm not sure if you are travelling south at all, but this is the place we stayed: http://www.wotif.com/hotel/View?hotel=W10471 It was really good for wildlife viewing!