Today my family and I traveled from Ayers Rock in the center of Australia to Sydney, Australia's largest city, located on the eastern coast of the country.

After checking out of our hotel in the late morning, my family and I took one more drive along the perimeter road that encircles Ayers Rock. Here is a view of an especially astonishing face of the rock that isn't typically photographed: 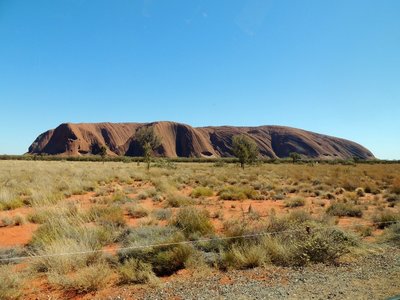 We had lunch in the car, and soon after lunch we returned the car at the airport and checked in. After going through security, we waited for two or two and a half hours because our flight was seriously delayed. We were relieved when we got on the plane.

I took two last photos of Ayers Rock from the plane at the airport. The first one is a close-up of the rock and the second one showcases the clouds typical of the area, with the rock being in the lower left-hand corner of the photograph: 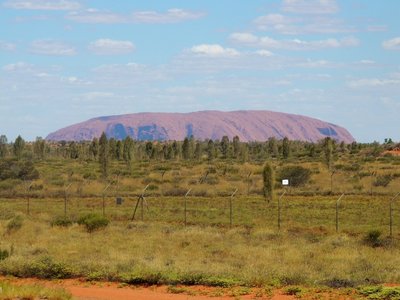 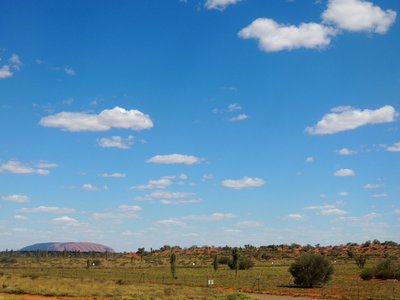 At the end of a pleasant flight our plane took a landing path that flew right past the city. We could see all of the famous Sydney landmarks...the bridges, the bay, the opera house, etc., it was really amazing.

After getting our bags in the airport, we took a train to a ferry and finally walked for ten minutes before my family and I arrived at our rental apartment which we will stay in for 4 nights. That means we have three full days in the Sydney area, which will be nice and relaxing after moving around a lot.

I didn't see many good birds, but a YELLOW-THROATED MINER was a nice surprise at a gas (here in Australia called petrol), station in the Ayers Rock area, so that will be the bird of the day.

Stay tuned, because tomorrow is our first of three full days in Sydney, Australia's largest city.

Posted by skwclar 04:15 Archived in Australia

I hope you and the family enjoy Sydney! You selected the best winter to be away from the midwest. Here it is March and we still are experiencing below zero weather at night!! Bring some warm weather back with you, Henry!