Day 52: The Definition of Perfect

Hello, this is the post for yesterday since my iPad ran out of power when I was trying to post.

Yesterday my family and I flew from Sydney, Australia to Denpasar, Bali, Indonesia. It was a heck of a day, as we had to walk for ten minutes, ride a ferry, ride two trains, take a six hour airplane ride, then finally get picked up by our driver and make the two hour commute to our house on the island of Bali in Indonesia. While on the ferry yesterday morning, we saw the fourth and last cruise ship we saw in Sydney: 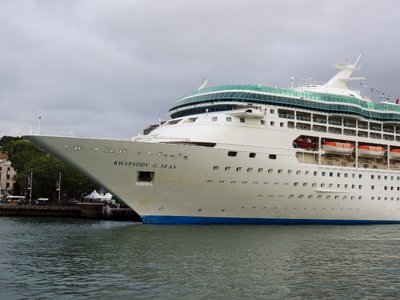 The flight was overall a pleasant flight on Virgin Australia Airways. The flight attendants doted on Pearl and gave her a lot of attention, which was mildly entertaining to watch.

Then, once we arrived at the airport in Bali, we took a bus to the terminal and after waiting in a lot of annoying lines, we got picked up by our personal driver for the week. He is a very nice driver and took us to the "best grocery store in Bali" and had the AC cranked up in the car, which was relieving because even though it was only 84 degrees outside, it felt balmy because of the high humidity. The grocery store was very interesting because they had exotic fruits of which I can't pronounce the names except for one called the Red Lion Fruit, which we bought. The funny thing was, they had a section in the store that was labeled "exotic fruits," but instead of having the exotic fruits I mentioned, it had apples, oranges, pears, and stuff like that!

While in the car, we noticed that driving in Bali takes skill. Motorcycles comprise over half of the already crowded traffic on the roads and highways, and people drive all over the road. Painted lines on the streets are not heeded. Stop signs are ignored. A few times I had to clench my teeth at the tight traffic, but we always deep down inside felt safe with our driver who immediately proved to be reliable, responsible, and safe.

Immediately once we arrived at our rental villa for the week, we were stunned. Everything totally blew our expectations for the place out of the water. Walking from the underground carpark, you go up a flight of stairs, past a wall that has water tumbling down it, and then arrive on ground level. In order to get to the stairs that lead up to the villa, you have to navigate a very narrow path that winds right along the perimeter of our large, personal pool. Then, you walk up a massive flight of stairs and arrive in the huge, Balinese-style villa. The bottom floor of the villa is pleasantly air conditioned with a foyer, two bedrooms, a bathroom, and a kitchen, and the second floor is open-air style with a bathroom and two beds. I sleep on the second floor and let the evening hoot of the owls and the purr of the crickets caress me to sleep.

So now you know what I mean by "the definition of perfect." That's where we are now; what a magnificent grand finale to our trip.

Here is a photo of my bed: 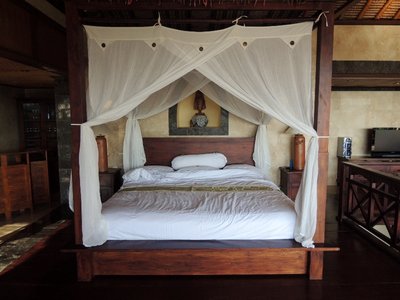 And here is the view from my bed: 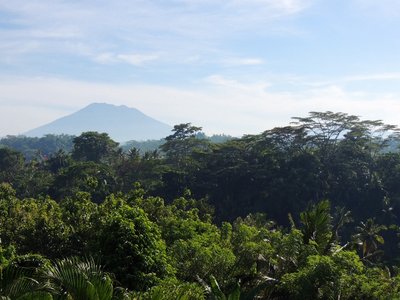 I do have a few target birds for Bali including the BALINESE HERON and the BALI STARLING, which I will both hopefully get to see in the next week we are here.

After a week here, we will spend two days in Singapore and then head home.

Posted by skwclar 17:03 Archived in Indonesia

Tell Mom and Dad they really hit the jackpot with this villa! Wow!Have fun! Love, AM