With the warmer temperatures this weekend, I thought it would be an opportune time to post this spring's dates for FREE Oak Park Bird Walks! It should be a great season!

Email me to reserve a space(s) on a walk(s) at trumpetswan@comcast.net

Good birding, and I hope to see you this spring!

Long time no see! It is turning out to be my busiest, most hectic semester EVER and only just yesterday (Saturday, February 12) did I go birding proper for the FIRST time in 2016, as unbelievable as that sounds! More on that later...

Even though I had not really gone birding before yesterday, I have a few photos from the last about month-and-a-half to share with you. This is a flyover immature BALD EAGLE photographed on my jazz ensemble's tour to Purdue University. We won first place in Illinois and second place overall in the Purdue Jazz Festival! 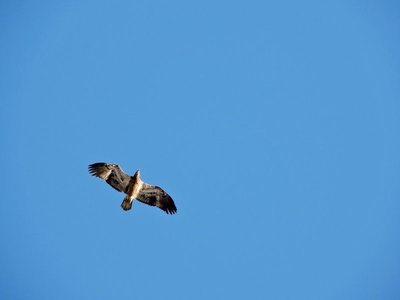 WHITE-BREASTED NUTHATCH, shoutout to my cousins Dave & Katie J for this awesome feeder: 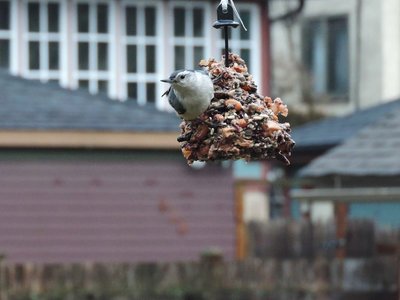 Beautiful male NORTHERN CARDINAL. A few have already started to sing - one of the first signs of spring! 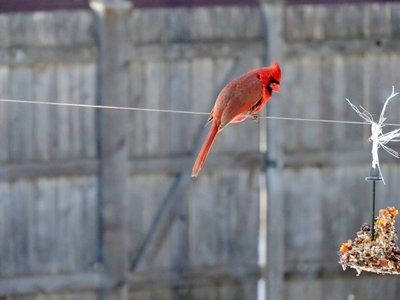 Yesterday, Saturday, February 12, I attended Illinois Ornithological Society's annual Gull Frolic! This is arguably the premier birding event of the year, held annually for a day in winter (which usually also happens to be the coldest day of winter) where 150 birders from around the state and around the Midwest enjoy "chumming" (throwing bread out for) rare gulls, photographing and learning how to better identify them, and a delicious lunch in the cozy yacht club of the North Point Marina, located on far northern Lake County's Lake Michigan shoreline. I was hoping to find two possible life birds - Glaucous and Iceland Gulls.

As mentioned, it was one of the coldest days of the entire winter with temperatures ranging from 3 degrees Fahrenheit in the early morning to a "balmy" 13 by late afternoon. Wind chill reduced the temperature to feel like the -20s for most of the day.

Special thanks to Eric Gyllenhaal for driving me up there and back! With his son, Aaron, the three of us stopped at a landfill in Lake County to look for gulls before heading to the actual Gull Frolic. We had mainly HERRING with a smattering of RING-BILLED and my life bird (!) GLAUCOUS GULLS - my 1st target bird for the day accomplished. The species pictured here are just Herring and Ring-billed: 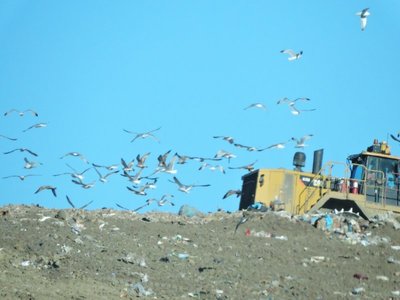 Then, we drove up to North Point Marina for the actual Gull Frolic: 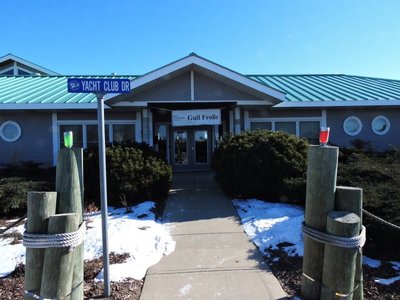 And we were lucky to have conditions in the harbor nearly perfect with a mixture of iced-over areas and open water, fantastic habitat for gulls. Sure enough, they were out in force today and I estimate that there were well over 850 gulls in total, and most likely that number exceeded 1000. It was quite impressive! 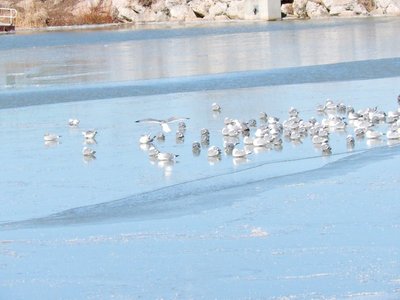 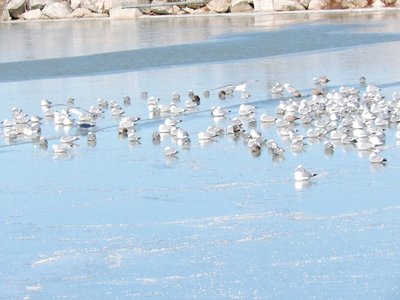 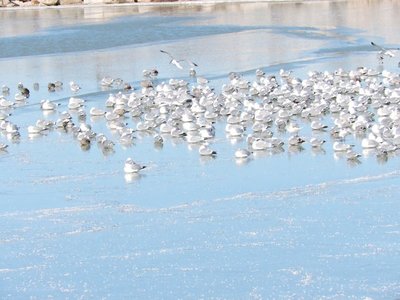 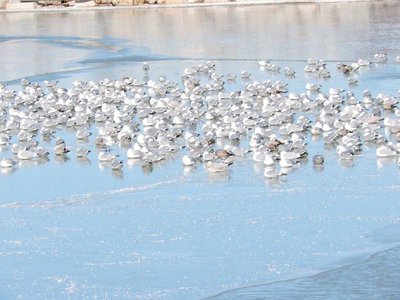 I had 6 gull species, which is very good considering only 7 are regular to Illinois in the winter. A few others reported they had seen the 7th species, a Lesser Black-backed Gull, but I failed to find it. 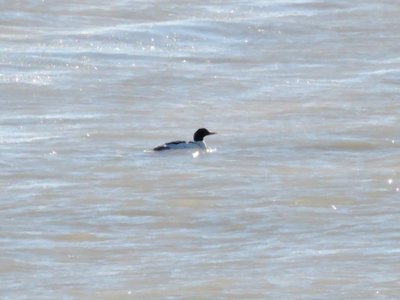 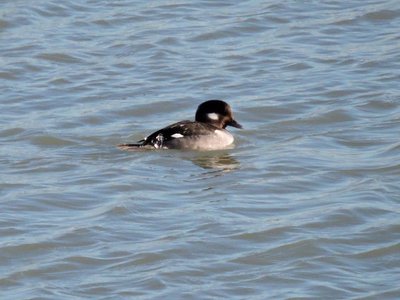 Birders were also abundant and an absolute delight to talk to! 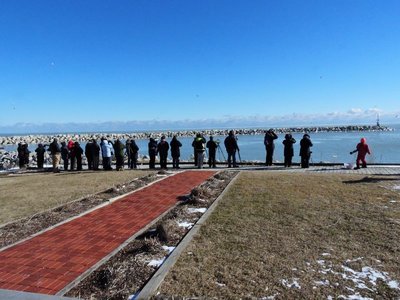 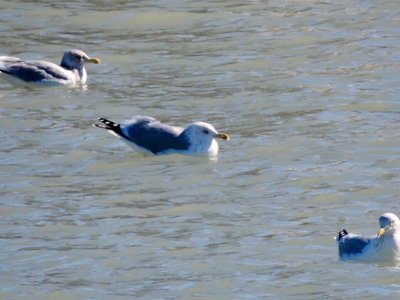 Then, I found my second of two targets for the day! A beautiful white ICELAND GULL! (Kumlien's subspecies) graced us with its presence: 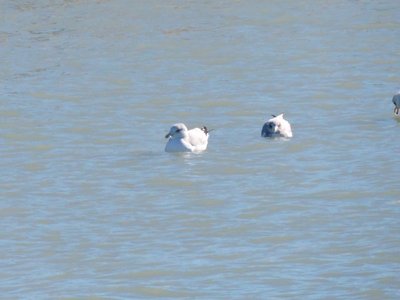 My two life birds posed right next to each other! Iceland Gull (bottom left) and Glaucous Gull (upper right): 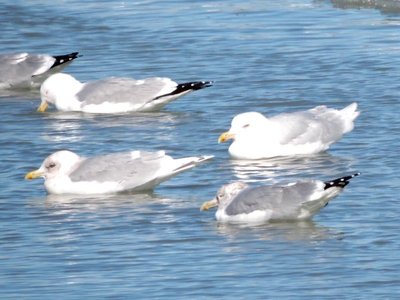 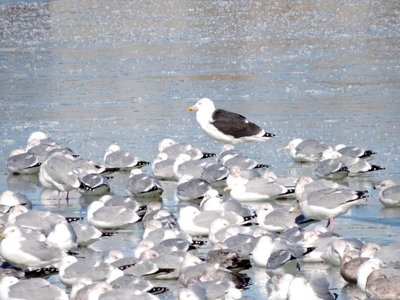 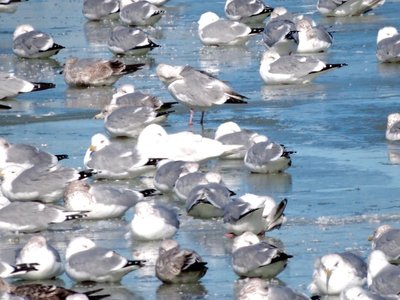 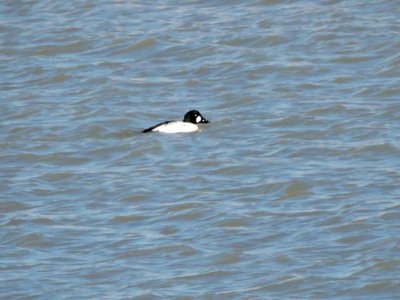 AMERICAN TREE SPARROWS like this one were the only passerine (songbird) present at the Gull Frolic: 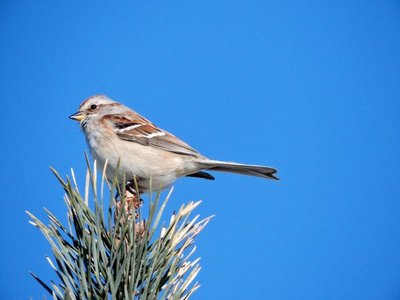 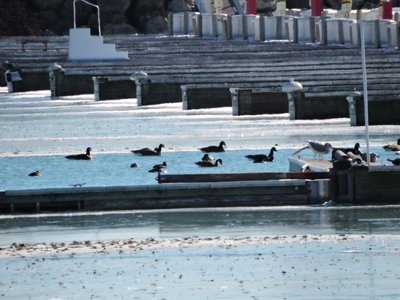 RING-NECKED DUCK, a rare species for winter on Lake Michigan: 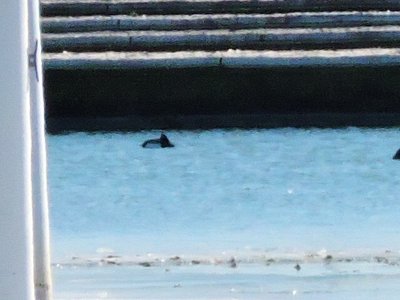 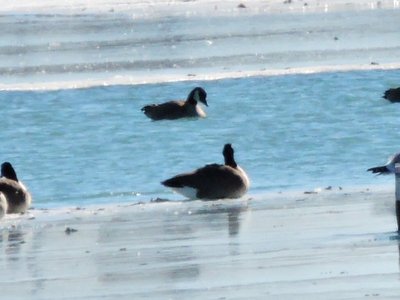 Uncommon ICELAND GULL, the all-white gull in the middle: 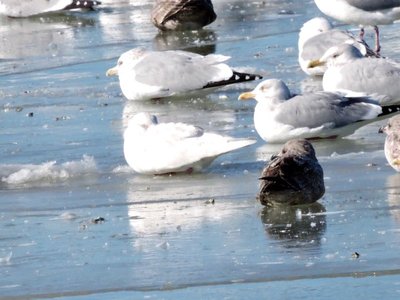 GREAT BLACK-BACKED GULL, the most beautiful gull of the day in my opinion: 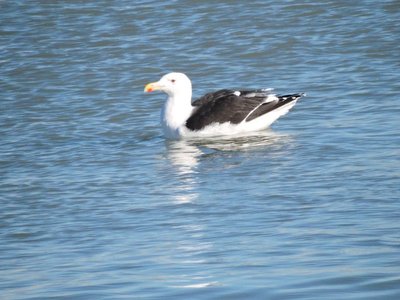 RED-TAILED HAWK along the way home: 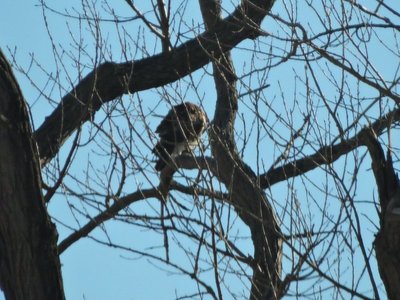 We stopped at the Hawk Watch location of Illinois Beach State Park on the way home and found this distant NORTHERN SHRIKE, a very good bird for Illinois: 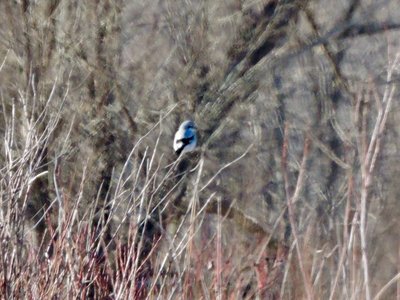 Here is the full species list from the day:

The next piece of news is my upcoming recital on February 21! I play piano, trumpet, and sing and produce one solo recital annually. Here are all the details, all are invited and feel free to bring along family and friends! 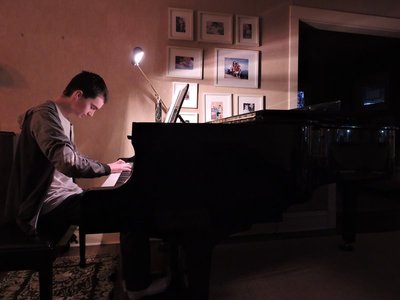 Finally, here are my plans for 2016. This semester is turning out to be insane so, apart from a busy season of Oak Park Bird Walks, I am not expecting to be doing much other birding this spring. My family may travel somewhere over spring break but we are still undecided as of now. Then, from June 27 - July 3 I will be participating in my choir's, the Voice of Chicago's, tour to CUBA! This is the trip shown on the map above this blog post. Next on the list will be a five or six day birding trip to the Everglades with my dad and maybe my sister in mid July. Finally, my family will be returning for our annual 2.5 or 3-week trip out to Sun Valley, Idaho in August.

Stay tuned! When I get my Oak Park Bird Walk dates confirmed, I will post about that to this blog.