This year I'm thankful for all of the wonderful trips I've taken so far in 2015 to see astounding birds and have other great experiences: southeast Arizona, the East Coast, Costa Rica, Idaho, and countless wonderful day trips (all of which can be revisited via the bar on the right of this post with links to other posts). I'm also looking forward to many other upcoming trips: a Caribbean cruise to the Bahamas and Grand Turk in just three weeks, a trip to winter birding mecca Sax-Zim Bog in northern Minnesota with my aunt and uncle right after Christmas, the Great Smoky Mountains for spring break, Cuba in late June, and possibly Ecuador or Peru later next summer.

Much closer to home, in fact, right outside the window, this beautiful male NORTHERN CARDINAL dropped by to wish me a happy Thanksgiving. Although it may not be the most interesting time of year for backyard birds, one can always marvel at cardinals. 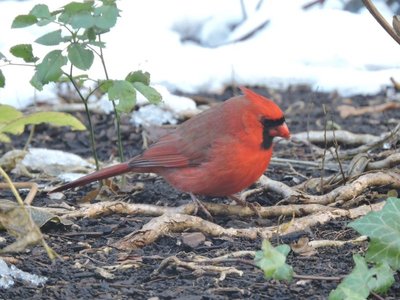 12th Owl Species of the Year!

Welcome to another episode of Sunday evening birding!

This evening I went birding with birder Eric Walters in northeast Lake County, Illinois. We covered State Line Beach, Spring Bluff Forest Preserve, and the North & South Units of Illinois Beach State Park with our primary target being the diminutive Northern Saw-whet Owl. This was the last of his surveys of this species for the fall, as he surveys for this species in Illinois multiple times each October-November.

I rode the trusty ol' Metra up to Winthrop Harbor which was about an hour and a half train ride: 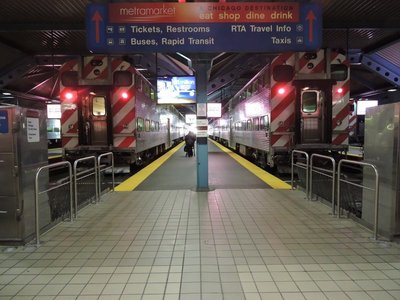 We started at State Line Beach, where the bird activity was low but Lake Michigan looked beautiful at sunset during this clear, pleasant day in the upper 50's/lower 60's: 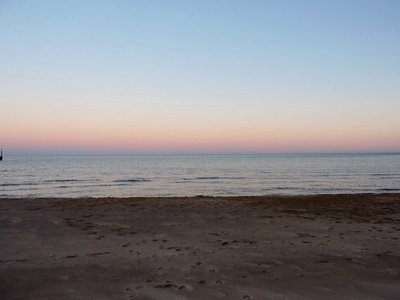 We then continued to Spring Bluff Forest Preserve, where the activity was slow at first but then things started picking up. A pair of SANDHILL CRANES flew overhead and I photographed them on their descent into the marsh with "landing gear down," against a background of the sunset: 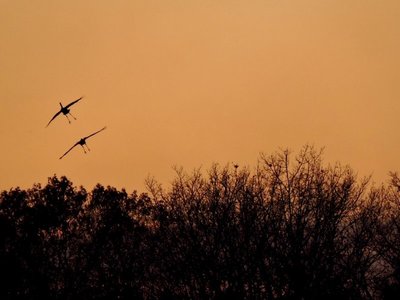 We then located them in the marsh: 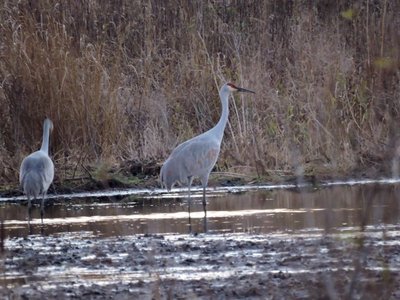 200-300+ CANADA GEESE also flew over on their way to their evening roost: 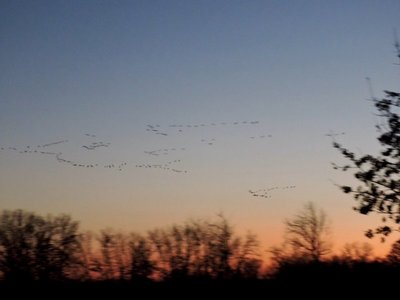 One sub-flock within the larger flock held a much smaller goose that turned out to be my life bird CACKLING GOOSE! It is in the lower line of geese and appears to be the eleventh (much smaller) bird from the right: 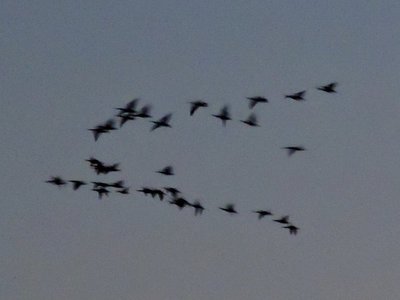 The identification for this goose is positive because it is the only goose that is under half the size of the Canadas, as the above photograph illustrates. Then, we heard the begging screeches of two young GREAT HORNED OWLS, as well as the low-pitched calls of an adult. Here is one of the "young-uns" against the sunset: 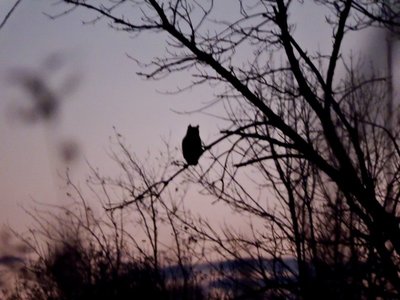 This was an awesome sensory experience because as I was watching this owl silhouetted against the beautiful sunset, Canada Geese were trumpeting overhead and a not-so-distant pack of coyotes were howling vociferously. Soon, the sun was completely down and the beautiful crescent moon became obvious: 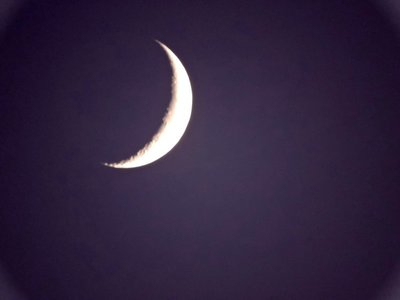 At that cue of nightfall, Eric and I surveyed various locations in Illinois Beach State Park for our target - the Northern Saw-whet Owl - a beautiful species that is a tad smaller than a Robin. The survey method is parking the car, opening all of the doors, and blasting the Northern Saw-whet Owl's various recorded calls into the wilderness; then, listening for responses from real birds between and after the calls are played. We soon picked up another GREAT HORNED as well as two EASTERN SCREECH-OWLS, both species being fairly common year-round residents across the state. Then, at our second-to-last survey location, Eric pointed out to me a NORTHERN SAW-WHET OWL responding to its recorded call by giving its ascending "Weerp!" call three times. It fell silent when a nearby Screech Owl started whinnying, but it was certainly a positive identification because we both heard it clearly! We could never locate either of the owls, but hearing "counts" just as much as seeing! This is what the location looked like where we heard the Saw-whet: 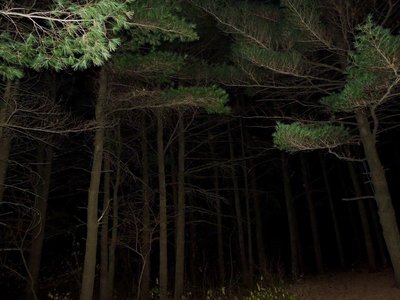 It was a fantastic evening and certainly a nice break from the hectic nature of this school year! Thanks so much to Eric Walters for letting me tag along on his final, and successful, Northern Saw-whet Owl survey!

Bird-of-the-day goes to my life bird NORTHERN SAW-WHET OWL, of course, and runner-up goes to my other life bird today - CACKLING GOOSE!

The Northern Saw-whet Owl is my 12th owl species this year, which is rather unprecedented as I have never gotten nearly this many owls in a single year! So I guess this continues my streak of "owl luck" this year! In addition, this is only the second time ever I have gotten three owl species in one evening!

The full species list from the evening is attached below.

Not Every Bird You Chase You Get!

Today I went on a truly wild goose chase to find a rare bird that had shown up in the Lincoln Park Zoo of Chicago. It was a Common Ground-Dove which is a vagrant from Mexico (and not an escaped zoo bird because they don't house that species), and it would have been a life bird for me had I seen it.

After riding the CTA "El" and bus to get there and even searching with some very kind birders, I could not find the bird between 3:30pm and 5:00pm.

I was so concentrated on finding this dove, in fact, that the only other bird I bothered photographing was this juvenile RING-BILLED GULL hanging out with the flamingoes: 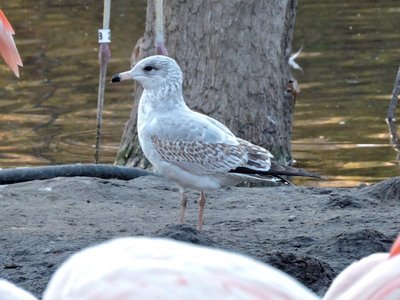 There is always tomorrow! If the bird is reported again tomorrow morning, I will try to find it again during the afternoon!

I took advantage of this beautiful Sunday with temperatures in the 60's and clear skies to bird the beautiful Fort Sheridan Forest Preserve in Highwood, Illinois with a birding friend Suzanne Coleman. We had a fantastic time - thanks to Suzanne for driving me around also!

Fort Sheridan is a stunning preserve bordering Lake Michigan with rolling hills covered in grassland, deep wooded ravines, and a beautiful view of the lake - which was as smooth as glass on this perfect weather day.

According to some birders we met when we arrived, over 200 raptors had migrated over the preserve during the day but, sadly, before we arrived. Fort Sheridan is renowned in the mid-late fall for its productive raptor flights, which use the Lake Michigan shoreline to guide them southward. Raptors are among the few bird species that actually migrate during the day; most migrate nocturnally! Sadly, the only raptor we saw - since it was getting late in the afternoon - was this distant RED-TAILED HAWK: 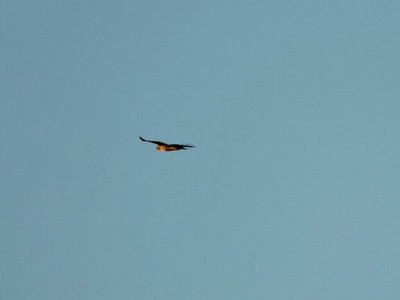 Then, we did a bit of lake watching and hoped to find our lifer Snow Buntings which have been reported here recently along the shoreline, but alas, the most interesting find was this immature HERRING GULL: 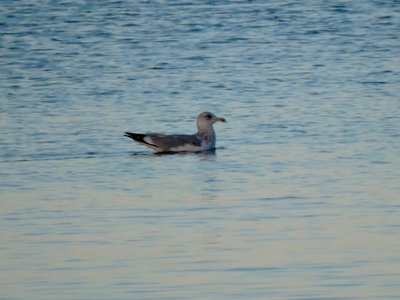 We found a pocket of AMERICAN TREE SPARROWS, my first of the season, in a wetland away from the lake: 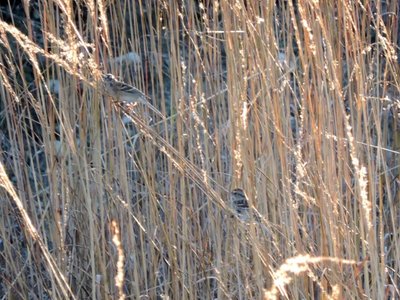 We also found many SAVANNAH SPARROWS such as this one: 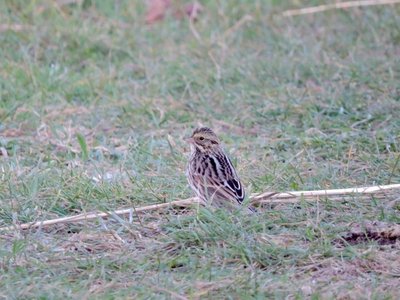 At one point, these four MALLARDS flew over, possibly migrating: 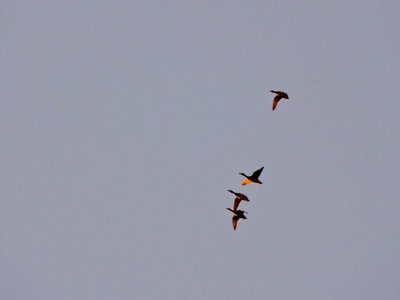 And we spotted a larger raft of 60+ ducks in migration over the lake; however, we could not identify the species: 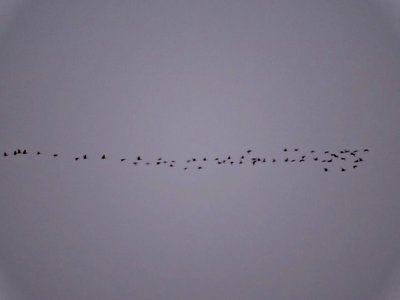 The sunset was beautiful, and it was soon growing dark. Suddenly, Suzanne spotted something moving on the trail ahead of us. Can you spot it in this photo? 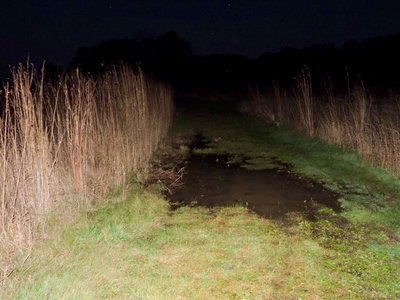 AMERICAN WOODCOCK! A stocky bird in the sandpiper family with a funny name, this is only the second time I have ever seen this species! This and the above photo were taken with flash, but don't worry, these are the only two flash photos I took so as not to disturb him. 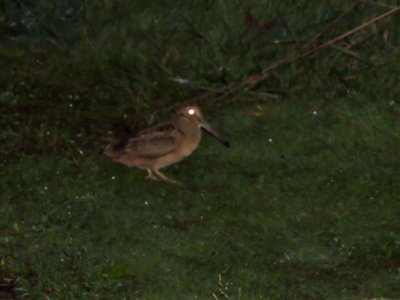 And just as we were about to leave, I spotted this GREAT HORNED OWL perched on the distant treeline: 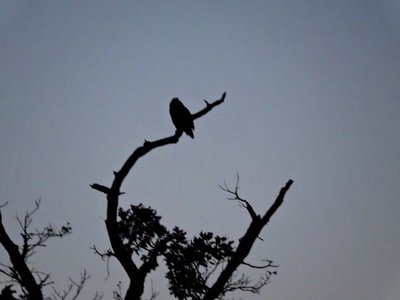 It was a fantastic evening of birding with Suzanne! Thanks again to her!

Bird-of-the-day goes to the AMERICAN WOODCOCK which I have only seen once before, and runner-up to the last bird of the night: the GREAT HORNED OWL, continuing my lucky streak of owls this year! The full species list from the evening is attached below.